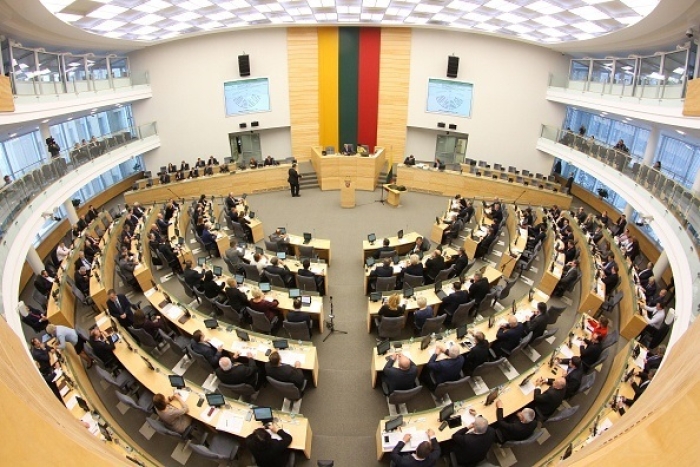 (CNSNews.com) – Lithuania’s parliament on Tuesday became the first legislature to label Russia a terrorist-supporting state over its invasion of Ukraine, in a move coinciding with a bipartisan initiative in Congress for the administration to designate Russia as a state sponsor of terror.

“The Russian Federation, whose military forces deliberately and systematically target civilian targets, is a state that supports and perpetrates terrorism,” read the resolution adopted unanimously by the 128-member Lithuanian parliament, the Seimas.

The measure also accused Russia of carrying out “genocide against the Ukrainian people,” and called on the international community to establish an international tribunal to prosecute and hold accountable the perpetrators. The tribunal should be given authority to issue international arrest warrants, and there should be no immunity for heads of state, it said.

Lithuania, a former Soviet constituent republic that joined NATO and the European Union in 2004, has been one of Europe’s most outspoken critics of President Vladimir Putin and his invasion of Ukraine. The small Baltic nation is also strongly backing Ukraine’s bid to join the E.U.

“To the brave people of Lithuania, thank you and congratulations on designating Putin’s Russia as a state sponsor of terrorism. Living in Putin’s shadow, you understand this issue better than most,” he tweeted.

“I hope the Biden Administration, with encouragement from the U.S. Congress, will follow your lead and also designate Russia as a state sponsor of terrorism.”

Graham on Tuesday joined Sen. Richard Blumenthal (D-Conn.) in introducing a resolution calling on the secretary of state to take that step.

The resolution accuses Russia under Putin of “acts of international terrorism against political opponents and nation states,” citing military actions in Chechnya, Georgia, Syria, and Ukraine; atrocities including summary executions in the Ukraine war; and the activities of proxy mercenaries including the Wagner Group.

It also makes reference, quoting from Ukraine’s parliament, to the 2018 poisoning of former Russian spy Sergei Skripal in England, the downing by Russian-backed separatists of Malaysia Airlines flight MH-17 over Ukraine in 2015, and Russia’s support and financing of “terrorist regimes and terrorist organizations” in the Middle East and Latin America.

“For 20 years [Putin has] literally gotten away with murder,” Graham said during a press conference. “Now it’s time to designate him in a fashion befitting his conduct. He is a terrorist, and Russia is in the hands of a terrorist state, run by Putin.”

Speaking alongside Graham, Blumenthal said the resolution would “put Russia outside the pale of civilized nations” and “outside the family of nations that adhere to basic norms of decency and morality.”

Currently only North Korea, Iran, Cuba, and the Assad regime in Syria are labeled state sponsors of terrorism under U.S. law. Designation carries sanctions including a ban on arms-related exports and sales, controls over exports of dual-use items, prohibitions on economic assistance, and various financial restrictions.

Designation requires a determination by the secretary of state that a country’s government “has repeatedly provided support for acts of international terrorism” over the previous decade.

Asked on Tuesday how close the administration was to making a determination regarding Russia, based on its current actions in Ukraine, State Department spokesman Ned Price said the department does not disclose its “internal deliberations,” whether regarding this or any other authority.

But he said the department in such cases examines the applicable law, and the facts.

“And so we are looking at both. And when it comes to the facts, we are closely looking at what Russia is doing, what Russia has done, to the people of Ukraine to determine which policy tools are most appropriate and responsive to those actions.”

Price said that if a tool was deemed to be appropriate and effective, “we will not hesitate to use it.”

In addition to specific incidents – like the attempted assassination of Skripal and the shooting down of the Malaysia Airlines plane – an assessment of Russia’s eligibility for designation as a state sponsor of terrorism would also take into account any financial or other form of support for organizations designated by the U.S. as “foreign terrorist organizations” (FTOs) or “specially designated global terrorists” (SDGTs)

As it seeks to increase its influence in the Middle East, the Russian government has drawn closer to Hamas (hosting delegations in Moscow over the years, most recently last week) as well as Hezbollah, one of its allies in the Syrian civil war. Hamas and Hezbollah have both been designated FTOs since 1997.

Qassem Soleimani, the leader of Iran’s Islamic Revolutionary Guard Corps (IRGC)-Qods Force, reportedly visited Moscow for top-level talks more than once in the years before his death in a 2020 U.S. drone strike.

Although the IRGC was only listed as an FTO in 2019, Soleimani himself was designated a SDGT in 2011. (He was also subject to a 2007 U.N. Security Council travel embargo, which Russia violated by hosting him.)