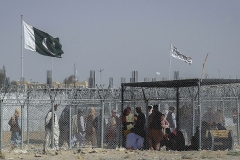 A border crossing between Pakistan and Taliban-ruled Afghanistan, at Chaman, on the road linking Kandahar and Quetta. (Photo by -/AFP via Getty Images)

(CNSNews.com) – U.S. lawmakers involved in efforts to help American citizens leave Taliban-controlled Afghanistan directed frustration and anger on Monday at the federal government, accusing it in one instance of “inexcusable bureaucratic red tape” and in another of claiming misplaced credit for getting one family group safely out.

Since the U.S. military-led evacuation mission at Kabul airport ended a week ago, private initiatives aimed at rescuing stranded Americans have continued.

One such mission, involving military veterans including a Republican candidate for a Florida congressional seat in the 2022 midterms, Cory Mills, succeeded early Monday morning – Monday afternoon in Afghanistan – in getting a mother and three children across a land border and to safety in an unspecified neighboring country.

Rep. Ronny Jackson (R-Texas), who has been centrally involved in the two-week bid to rescue the four family members from his congressional district, described it as “the first successful ground evacuation since the U.S. left Kabul.”

Jackson thanked Mills and “the other patriots on his team” for saving "Mariam" and her children. Among those on the ground was another U.S. congressman, Rep. Markwayne Mullin (R-Okla.)

The Associated Press early Monday quoted a U.S. official as saying that the Americans “successfully departed Afghanistan using an overland route” and were met by U.S. Embassy staff at the border. 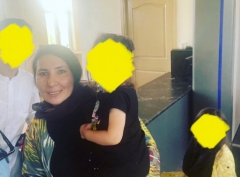 A picture of Mariam and her children, faces obscured, posted by Rep. Markwayne Mullin. (Photo: Twitter)

CNN then reported, “The United States facilitated the departure of four American citizens from Afghanistan via an overland route to a third country, a senior State Department official said Monday.”

That description of events brought sharp responses from both Jackson and Mullin.

“This article makes me want to PUKE!” tweeted Jackson. “The State Dept didn’t do a damn thing for these people for 12 days except almost get them killed repeatedly. I know, because my office and the team on the ground led by Cory Mills & [Mullin] facilitated their escape every step of the way.”

“This is a flat out lie,” charged Mullin. “The Biden Administration abandoned them. Let’s be clear, it was our team of patriots who worked around the clock for two weeks to get them out, despite the many roadblocks from the State Department.”

Meanwhile a Democratic senator who has been trying to help U.S. citizens and at-risk Afghans also vented at the administration on Monday.

Sen. Richard Blumenthal (D-Conn.) said he and his staff have been working round the clock, together with a coalition of “NGOs, former service members and journalists,” to secure the safe departure of American citizens and Afghan allies and families in two aircraft waiting at Mazar-i-Sharif, about 200 miles north-east of Kabul.

“I have been deeply frustrated, even furious, at our government’s delay and inaction,” he said in a statement.

“There will be plenty of time to seek accountability for the inexcusable bureaucratic red tape that stranded so many of our Afghan allies,” Blumenthal said. “For now, my singular focus remains getting these planes in the air and safely to our airbase in Doha [Qatar], where they have already been cleared to land.”

Blumenthal said he expected the White House and State Department to do “absolutely everything” in their power to get them to safety.

On Sunday the ranking Republican on the House Foreign Affairs Committee, Rep. Michael McCaul of Texas, claimed that the Taliban was preventing six aircraft on the tarmac at Mazar-i-Sharif airport from departing.

McCaul told Fox News Sunday the Americans and Afghan allies wanting to fly out of the country were effectively being held “hostage” by the fundamentalist group, which wants the U.S. to recognize its seizure of power in Afghanistan.

“They’ve sat at the airport for the last couple of days, these planes, and they're not allowed to leave,” he said. “We know the reason why is because the Taliban want something in exchange.”

McCaul said the plight of those wanting to leave was “turning into a hostage situation, where they’re not going to allow American citizens to leave until they get full recognition from the United States of America.”

He said “zero” Americans and Afghan allies have been able to leave Afghanistan since the last U.S. troops left at the end of the evacuation mission in Kabul a week ago. (McCaul was speaking before news broke of the four Americans crossing the border to safety.)

White House chief of staff Ron Klain said on CNN’s “State of the Union” on Sunday that the administration believes “around 100” Americans left behind are still waiting to leave Afghanistan.

“We’re in touch with all of them who we’ve identified, on a regular basis,” he said. “Obviously, we’re hopeful that in the coming days the Qataris will be able to resume air service out of Kabul.”

“And if they do, we’re obviously going to look to see if Americans can be part of those flights,” Klain said. “We are going to find ways to get them – the ones that want to leave, to get them out of Afghanistan.”

Secretary of State Antony Blinken on Friday reiterated the administration’s view that the international community has meaningful leverage to compel the Taliban to allow freedom of travel.

“As you know the Taliban, among other things, is seeking sanctions relief – U.N. sanctions,” he told reporters at the State Department. “It is seeking the ability for its leaders to travel freely, which, again, under U.N. sanctions they currently cannot do absent an exemption.”

“And if a Taliban-led government is in violation of this latest Security Council resolution on freedom of travel, it’ll be – it’s pretty hard to see how they would get, for example, that kind of relief.”

Blinken, who was in Doha on Monday for talks on the Afghanistan crisis, is scheduled to testify before the Senate Foreign Relations Committee next Tuesday.

The hearing on “Examining the U.S. Withdrawal from Afghanistan” is the first of what are expected to be a number of congressional assessments of President Biden’s decision-making and handling of the troop drawdown and its chaotic culmination at Kabul airport.