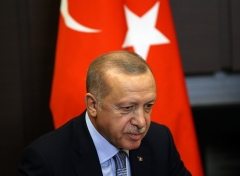 The sanctions bill is tied directly to Erdogan’s offensive against Syrian Kurdish fighters, but his government characterized the Armenian genocide measure, too, as a bid by frustrated lawmakers to punish Turkey over the military action. (In fact, initiatives in Congress calling the mass killings of Armenian Christians in Ottoman Turkey a century ago “genocide” have been underway for decades.)

While the Armenian genocide issue is a deeply controversial one in Turkey, the second vote Tuesday, on the sanctions bill, poses a more direct challenge to the NATO ally and its Islamist government.

--sanctions officials involved in the Syria offensive, including the defense and finance minister and top military officers;

--outlaws the sale to Turkey of U.S. arms that could be used in the Syria operation, and sanctions other countries that provide such military equipment to the Turks;

--targets for sanctions a major state-owned bank, Halkbank, which the Justice Department recently indicted for financial crimes including a scheme to evade U.S. sanctions on Iran;

The bill also requires the administration to provide a report on Erdogan’s net worth and income sources, as well as those of his wife, children, siblings and parents. (He’s believed to have four children and two living siblings. His parents died in 1988 and 2011.)

Although the two House votes came after midnight in Turkey following a public holiday, the foreign ministry in Ankara was quick to respond.

It said the sanctions bill was “incompatible with the spirit of our NATO alliance,” and contrary to an agreement reached between Erdogan and Vice President Mike Pence on October 17.

(Under that accord, Turkey agreed to “pause” its offensive against the Syrian Kurdish YPG fighters for five days to allow them to pull back from the area Turkish forces had invaded. Following that, Turkey agreed to end its offensive – but not withdraw troops – and the Trump administration lifted sanctions it had announced nine days earlier.)

The ministry complained that “U.S. officials” were disregarding the difference between a NATO ally and a terrorist organization. Turkey regards the YPG as a terrorist group because of its links to the Kurdistan Workers’ Party (PKK), which has waged a four-decade armed separatist campaign against the Turkish state.

The YPG was a key U.S. ally in the fight against ISIS in Syria, and many U.S. lawmakers, angered by Turkey’s actions against it, felt Erdogan had got off lightly.

“I urge support of this legislation so that we can send a unified, bipartisan message to Turkey, that if you want to be considered a strategic ally of the United States, a true ally, you have to act like one,” Rep. Gus Bilirakis (R-Fla.) said before the vote.

Rep. Sheila Jackson Lee (D-Texas) said Congress “must make a very strong statement that the United States will not stand for this kind of bullying.”

“Far too many men, women and children have died at the hands of Assad, Putin and Khomeini, and it’s unthinkable that a leader of a NATO nation will be joining this list of murderous thugs,” said Rep. Adam Kinzinger (R-Ill.), a U.S. Air Force combat veteran.

“But given the latest developments in Syria, many of our Kurdish partners will likely die because of Erdogan's offensive,” he said. “If he does not want to act like a NATO nation, then his government will feel the repercussions of such decisions.”

In a series of tweets overnight, Erdogan’s communications director Fahrettin Altun accused those behind the legislation of “brazen efforts to damage our relationship.”

“Attempting to sanction a NATO ally in order to protect a terror organization can only described as a strategic shortsightedness and detachment from realities on the ground,” Altun said.

“This draft bill cannot deter Turkey’s determination to fight against all terror organizations. It simply threatens and damages the outlook of the future of our bilateral relations.”

Despite that pledge to “fight against all terror organizations,” Erdogan has long been an ardent supporter of Hamas, which like the PKK is a U.S.-designated foreign terrorist organization.

Turkey also aligned itself with Salafist jihadist groups at various times during the drawn-out Syrian civil war, and the majority of the foreign fighters who flocked to Syria to join ISIS and al-Qaeda affiliates during the conflict crossed into Syrian from Turkey.