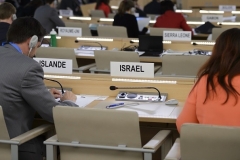 Israel’s seat stands empty during a previous session of the Human Rights Council dealing with the Israel-Gaza situation. Critics of the U.N. body say it is disproportionately focused on Israel, while many other serious situations around the world are ignored. (Photo by Fabrice Coffrini/AFP via Getty Images)

(CNSNews.com) – Members of Congress from both parties are asking the Biden administration to prioritize efforts to shut down the U.N.’s first ever open-ended investigation targeting one country, arguing that “yet another unjustified U.N. investigation of Israel” at a time of severe budget constraints is an irresponsible use of “precious resources.”

After 11 days of hostilities between rocket-firing terrorists in Gaza and the Israeli military last spring, the Geneva-based Human Rights Council (HRC) at an emergency meeting adopted a resolution establishing an “commission of inquiry” targeting Israel.

The resolution, adopted by the 47-member council in a 24-9 vote, with 14 abstentions, was silent on Hamas, the U.S.-designated foreign terrorist organization whose rocket firing from Gaza into Israel was met by retaliatory airstrikes. Twelve Israeli and foreign civilians were killed inside Israel, and 128 Palestinians were killed in Gaza, according to U.N. figures.

The resolution laid the groundwork for an open-ended inquiry into alleged violations of international humanitarian law and international human rights law, with a specific focus on gathering evidence that could lead to legal action against alleged perpetrators.

Commission of inquiries (COIs) or fact-finding missions established by the HRC typically have an expiration date; of 33 created since the HRC was formed in 2006, most lasted between several months and four years, with Syria and South Sudan exceptions. But none has had an “ongoing” mandate – until now.

The permanent entity will have a budget exceeding $5 million a year, sought up to 24 full-time staff (including a security officer, military advisor, forensic expert, and advisor on sexual and gender-based violence issues), and expects to see more than 800 working travel days in total each year by commissioners and staff.

Reversing the policy of its predecessor the Biden administration last year embraced the HRC, stood for “election” last fall and duly took up its seat from January 1, where it joined sitting and new members including China, Cuba, Eritrea, Kazakhstan, Libya, Pakistan, Qatar, Russia, Somalia, Sudan, Uzbekistan, and Venezuela’s Maduro regime. The council’s next regular session begins late next month.

The administration has spoken in opposition to the COI, and the U.S. was among a small handful of member-states to vote against approving its budget in the General Assembly last month.

At the time, U.S. diplomat Patrick Kennedy pledged that the U.S. would continue to oppose the COI and work in Geneva “to persuade more member-states that it is inherently biased and an obstacle to the cause of peace.”

Now 42 lawmakers led by Reps. Josh Gottheimer (D-N.J.) and Vicky Hartzler (Mo.) are calling on Secretary of State Antony Blinken to make the commission’s demise a priority – to “use the United States’ good offices to lead the effort to eliminate the biased COI.”

“This commission will not only focus on the actions Israel took in Gaza as it sought to defend its citizens from unprovoked rocket attacks,” they wrote in a letter to Blinken on Tuesday. “It will also have a carte blanche mandate – in perpetuity – to investigate any allegations against Israel in the past or in the future whether in the West Bank or Gaza or in all of Jerusalem, and even within the recognized pre-1967 borders of the State of Israel.”

“This COI is outrageous and ought to be cancelled. With the U.N. budget in crisis, stretched by the COVID pandemic which affects all humanity, it is irresponsible to spend precious resources on yet another unjustified U.N. investigation of Israel.”

Four consecutive administrations have spoken out against the HRC’s glaringly skewed focus on Israel, and it was a key reason given for the Bush and Trump administrations’ decisions to shun the council, after unsuccessful attempts to reform it.

The Obama and Biden administrations, while also strongly critical of the anti-Israel bias, argued that the HRC could best be improved from within.

Acknowledging differences of opinion over the issue, the lawmakers wrote, “Please know that while Congress may be divided on the administration’s decision to rejoin the UNHRC, we stand united in urging you to act upon the administration’s commitment to defend Israel from discriminatory treatment at the Human Rights Council and throughout the U.N. system.”

In addition to the existence of yet another Israel-focused U.N. inquiry and its permanent nature, critics say the three commissioners selected to head it do not meet the expected standards – laid out in the COI’s terms of reference and other HRC documents – of “impartiality” and “objectivity.”

The COI is led by South African Navi Pillay, a former U.N. high commissioner for human rights, who has called Israel an apartheid state and spoken in support of the anti-Israel Boycott Divestment, and Sanctions (BDS) movement, and the U.N.’s controversial blacklist of private companies doing business in Israeli “settlements” in disputed territory claimed by the Palestinians.

The other two commissioners are Miloon Kothari of India, also a former U.N. human rights figure, who has accused Israel of war crimes; and Chris Sidoti, an Australian rights expert described as a “close friend and ally” of a human rights body set up by decree of the late PLO leader Yasser Arafat and which reports to the Palestinian Authority.

The COI has been mandated to report to the HRC – annually – with a first report due in June. It will also report every year to the General Assembly in New York, beginning in September.