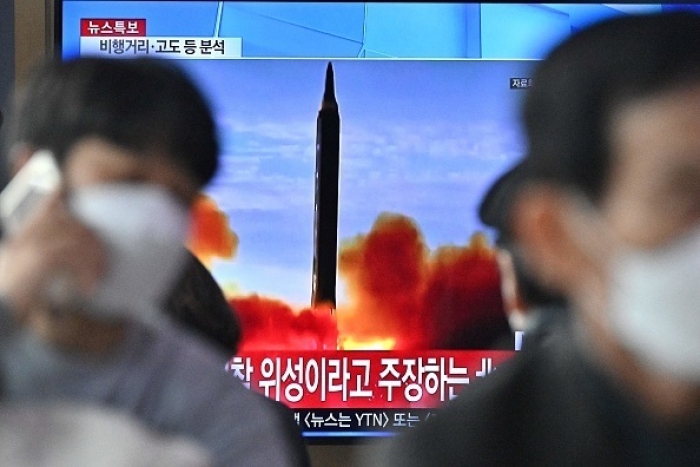 A television in a Seoul railway station on Thursday beams file footage of a North Korean missile test. (Photo by Anthony Wallace/AFP via Getty Images)

(CNSNews.com) – At a time when global attention is focused on Russia’s invasion of Ukraine and accompanying nuclear threats, North Korea has carried out what appears to be its most significant test ever of an intercontinental ballistic missile (ICBM).

Citing “the inevitability of the long-standing confrontation with the U.S. imperialists,” the nuclear-armed regime’s official Korean Central News Agency (KCNA) in a lengthy bulletin on Friday said that the projectile launched the previous day under the personal supervision of Kim Jong Un was a Hwasong-17 ICBM.

The missile was launched from near Pyongyang international airport, and landed inside Japan’s exclusive economic zone, about 95 miles off the coast of Japan’s northern island of Hokkaido.

The figures KCNA provided for the distance and height achieved by the missile exceed those reported in the regime’s previous ICBM tests, including tests of a Hwasong-14 ICBM in July 2017 and a Hwasong-15 ICBM in November 2017.

It claimed that the new missile flew for 67.5 minutes, traveled 677 miles (the horizontal distance from the launchpad at Pyongyang airport to the point of splashdown), and reached an apogee of 3,882 miles.

Japan’s defense ministry confirmed that no previously tested North Korean ICBM had flown for that long or reached such an altitude.

North Korea typically launches its long-range missiles in a steep upward trajectory, to avoid the territorial waters of its neighbors.

“The test launch was carried out in a vertical launch mode in consideration of the security of neighboring countries,” KCNA said.

(The South Korean military essentially confirmed the North’s claims, giving a distance of 671 miles and an apogee of more than 3,852 miles.) 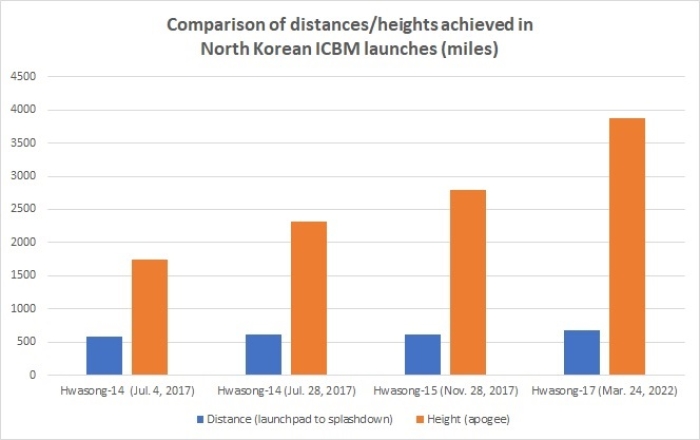 KCNA described the launch in characteristically flamboyant prose, referring to the launch site “seething with the ardent anticipation of all the defense scientists and munitions workers to inform the whole world of the production of another powerful nuclear attack means by Juche Korea and to demonstrate with pride the reliable DPRK's nuclear war deterrent force.”

DPRK is the acronym for the Democratic People’s Republic of Korea, the Stalinist state’s formal name. “Juche” (self-reliance) is its ruling ideology.

It said Kim Jong Un had been present at the launch pad to give guidance and “strength and courage to the defense scientists and missile maintenance crew involved in the launch, to bring about a momentous time when the epochal development of the defense capabilities of the country would be demonstrated all over the world.” 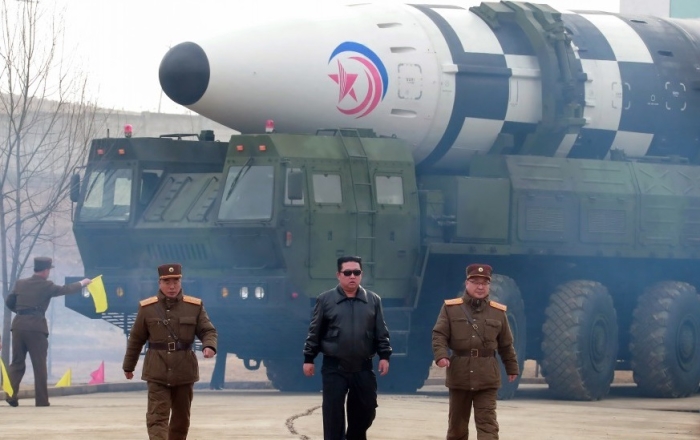 KCNA extolled Kim’s “deep insight into the ever-changing international political situation, the root cause of the daily-escalating military tension in and around the Korean peninsula and the long-term demand of our revolution that stems from the inevitability of the long-standing confrontation with the U.S. imperialists accompanied by the danger of a nuclear war.”

It cited Kim as saying that any force daring to infringe upon North Korea’s security “will have to pay a very dear price.”

“He stressed that our national defense forces would possess formidable military and technical capabilities unperturbed by any military threat and blackmail and keep themselves fully ready for long-standing confrontation with the U.S. imperialists.”

North Korea has claimed the ability to reach the continental United States with its ICBMs since 2017, when a series of launches stoked tensions on the peninsula to new heights.

On the eve of his historic first summit with then-President Trump in Singapore in June 2018, Kim agreed to a moratorium of testing long-range and intercontinental missiles.

Tests of various shorter-range projectiles continued over the ensuing years. After the regime tested an ICBM system in late February and early this month, the Biden administration said there would likely be more ICBM test launches to come.

State Department spokesman Ned Price said Thursday the U.S. condemned the test, which demonstrated the threat that Pyongyang’s “unlawful weapons of mass destruction and ballistic missile programs pose to the DPRK’s neighbors and the region as a whole.”

He said Secretary of State Antony Blinken had spoke with his South Korean and Japanese counterparts, and had committed to trilateral cooperation with Japan and South Korea “towards the complete denuclearization of the Korean peninsula.”

“The secretary reiterated the United States’ commitment to the defense of Japan and the Republic of Korea remains ironclad.”

The U.S. has requested an open meeting of the U.N. Security Council to discuss the launch. Ambassador to the U.N. Linda Thomas-Greenfield said it expected the meeting to be held on Friday.

At least nine Security Council resolutions adopted since 2006 prohibit the launching by North Korea of ballistic missiles of any range.