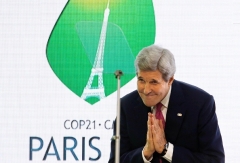 Then-Secretary of State John Kerry at the U.N. climate conference in Paris in December 2015. (Photo by Stephane Mahe/AFP via Getty Images)

(CNSNews.com) – Former Secretary of State John Kerry, who signed the Paris climate accord in 2016 on behalf of the Obama administration, has been named “special presidential envoy for climate” in a Biden administration, a position which for the first time will see a White House National Security Council include an official focused on the subject.

The decision, according to the Biden-Harris transition team, reflects Joe Biden’s “commitment to addressing climate change as an urgent national security issue.”

“Good to know!” tweeted the Swedish teenage activist Greta Thunberg, one of “the young leaders of the climate movement” Kerry was likely referencing.

Along with Green New Deal advocate Rep. Alexandria Ocasio-Cortez (D-N.Y.), Kerry served as co-chair of a climate taskforce set up by the Biden and Bernie Sanders camps earlier this year, after the senator from Vermont withdrew from the Democratic presidential primary and endorsed Biden.

The platform policy recommendations that the taskforce came up with did not directly endorse the Green New Deal, although it did set goals including eliminating carbon emissions from power plants by 2035, and retrofitting millions of buildings to make them “greener.” It also said Biden would rejoin the Green Climate Fund, although no details were given.

The Green Climate Fund is meant to raise $100 billion a year globally from public and private sources by 2020, to help developing countries curb CO2 emissions and cope with phenomena blamed on climate change. President Obama in 2014 pledged $3 billion, one-third of which had been transferred by the time he left office. President Trump withdrew in 2017, but the GCF holds the U.S. to be in arrears to the tune of $2 billion. 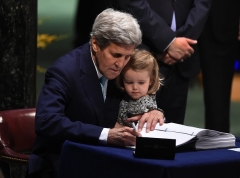 With granddaughter Isabelle Dobbs-Higginson on his lap, Kerry signs the Paris climate agreement at the U.N. in New York on April 22, 2016. (Photo by Timothy A. Clary/AFP via Getty Images)

Kerry went to U.N. headquarters in New York in 2016 to sign the global climate agreement negotiated at a conference in Paris the previous year. He signed with his two-year-old granddaughter on his lap, a photo op designed to symbolize that the accord is meant to save the planet for future generations.

The agreement aims to prevent average global temperatures from rising more than two degrees Celsius above pre-industrial levels, by achieving net-zero emissions by the second half of the century. The U.S. commitment, made by Obama, set 2025 as the target year to reduce U.S. emissions by 26-28 percent below 2005 levels.

In mid-2017, Trump notified the U.N. of its intention to exit the agreement and, once legally able to do so, his administration deposited its withdrawal notification in November of last year. Withdrawal formally took effect on the day after the election this month.

“Today, the Trump Administration officially left the Paris Climate Agreement,” Biden tweeted on November 4. “And in exactly 77 days, a Biden Administration will rejoin it.”

“The work we began with the Paris Agreement is far from done,” Kerry tweeted on Monday. “I’m returning to government to get America back on track to address the biggest challenge of this generation and those that will follow. The climate crisis demands nothing less than all hands on deck.”

The Trump administration points out that, Paris accord notwithstanding, U.S. energy-related CO2 emissions decreased by two percent in 2019, compared to China’s, which increased by more than three percent. U.S. energy-related emissions have dropped by 15.8 percent since 2995, while China’s have climbed more than 81 percent, according to International Energy Agency data.

“You need look no further than the Chinese Communist Party’s climate emissions year on year and their failure to already live up to the promises that they assertedly made in that agreement to understand that what really drives good relationships and good solutions are democracies working together to find innovative solutions with transparency, the rule of law, the things that really truly underwrite safe and healthy environments,” he said.

Kerry has characterized climate change as an issue at least as serious as other major global threats including terrorism and nuclear proliferation.

“You can make a powerful argument that it may be, in fact, the most serious challenge we face on the planet because it’s about the planet itself,” he told a U.N. event in 2014.