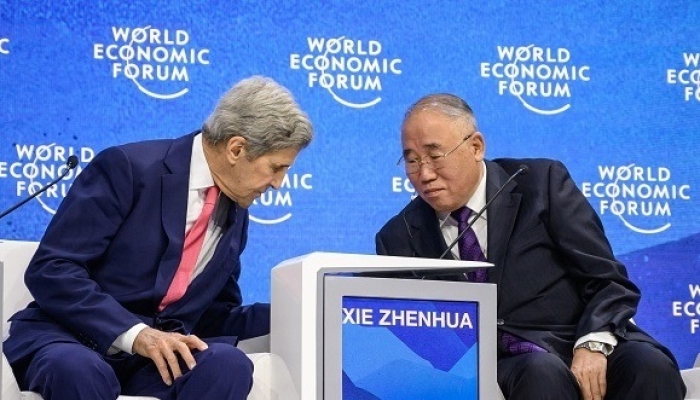 The meeting in Egypt came shortly after President Biden and Chinese President Xi Jinping met in Indonesia and agreed to resume cooperation on climate between the world’s two largest carbon emitters.

Kerry told reporters that he had a “very good meeting” with Chinese climate envoy Xie Zhenhua, and that “we’re going to go to work,” but no further details were offered.

The gathering in Sharm El-Sheikh known as COP 27 – the 27th “conference of the parties” to the U.N. Framework Convention on Climate Change – has been underway since November 6 and Xie said last week that he had already had “informal contact” there with Kerry.

The two men have known each other for years, working together during the Obama administration when Kerry was secretary of state and Xie headed China’s climate negotiation team – including in negotiations in the run-up to the landmark 2015 Paris climate accord.

Back at the helm of their respective countries’ climate efforts last year, they picked up on the earlier collaboration, and Kerry in April 2021 became the first senior Biden administration official to visit China, meeting with Xie in Shanghai.

However, Pelosi’s visit last August to Taiwan, which China claims as its own, put the partnership on hold.

Alongside launching its biggest military exercises ever near the island, Beijing announced it was severing bilateral contacts with the U.S. in eight key areas, including talks on climate change.

The instruction to cease cooperation clearly frustrated Kerry, who told the Financial Times in August, “The climate crisis is not a bilateral issue, it’s global, and no two countries can make a greater difference by working together than China and the United States.”

“This is the one area that should not be subject to interruption because of other issues that do affect us,” he said. Kerry said he and Xie were “solid friends” but the order to suspend cooperation had come “from the highest level” in China.

After Biden and Xi met in Bali on Monday, the White House said the president had stressed that the U.S. and China must work together to address challenges like climate change, “because that is what the international community expects.”

China’s foreign ministry said Xi and Biden had agreed that the two countries would “jointly work for the success” of COP 27.

Before the conference ends on Friday, delegates from the almost 200 nations present are hoping to reach a deal designed to further the campaign to prevent average global temperatures from rising more than 1.5 degrees Celsius compared to pre-industrial times.

One of the stickiest areas revolves around the push for developed nations to provide funding to poor ones for “loss and damage” from extreme weather events blamed on a warming planet.

China and the group of developing countries known as the G77 (which despite its name comprises more than 130 countries) are proposing the creation of a new fund which wealthy nations would contribute towards to meet this purpose. They want its rules and parameters to be agreed upon by the next U.N. climate conference, in Dubai in a year’s time.

Kerry was quoted as saying at the talks last week that the U.S. and many other countries would not agree to establish “some sort of legal structure that is tied to compensation or liability.”

“We will find a way, I am confident, to be able to have financial arrangements that reflect the reality of how we are all going to deal with the climate crisis,” he said.

On Monday a group of 13 progressive House Democrats in a letter to Kerry urged him throw the U.S.’s support at COP 27 behind the establishment of a “loss and damage” fund.

equitable path forward – as you know and have proven repeatedly in your own career, when the United States leads, others follow,” they wrote.

“Our leadership in supporting loss and damage financing would pave the way for transformative improvements in the global response on climate.”