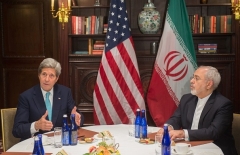 The claim came from Javad Zarif himself, in a not-intended-for-immediate-publication interview, a recording of which was leaked to a London-based news outlet, Iran International.

In the context of complaining that his ministry was often kept in the dark about Iran’s military operations in Syria, Zarif provided an example: “It was former U.S. Foreign Secretary John Kerry who told me Israel had launched more than 200 attacks on Iranian forces in Syria.”

The New York Times also reported on the leaked recording.

The notion that a former secretary of state would have discussed with the representative of a hostile regime the clandestine actions of Washington’s closest ally in the Middle East prompted some Republicans to call for answers – and for Kerry’s removal.

Kerry responded in a tweet on Monday evening: “I can tell you that this story and these allegations are unequivocally false. This never happened – either when I was Secretary of State or since.”

Price told a press briefing that – with regard to information about Israeli military strikes on Iranian targets in Syria – “if you go back and look at press reporting from the time, this certainly was not secret, and governments that were involved were speaking to this, publicly, on the record.”

(Price also said he did not want to comment on “purportedly leaked material” whose accuracy he could not speak to. The Iranian government has not only confirmed the recording’s authenticity, its state news agency has published excerpts.)

Israel customarily does not comment publicly on its military actions against Iran – an enemy sworn to its destruction – although on September 4, 2018 its then-intelligence minister, Yisrael Katz, said in a speech that Israel had in the previous two years “taken military action more than 200 times within Syria.”

Kerry and Zarif developed a rapport during the negotiations that produced the Iran nuclear deal known as the Joint Comprehensive Plan of Action (JCPOA) in 2015. Zarif periodically joked that the two of them spent more time with each other than with their wives over that period.

Kerry has acknowledged meeting with Zarif several times after leaving the State Department at the end of the Obama administration.

The meetings occurred on the sidelines of a Jun. 2017 meeting in Oslo focused on mediating armed conflict; at the Munich Security Conference in Germany in Feb. 2018, and at the U.N. in New York in Apr. 2018.

But Kerry also stressed that his meetings with Zarif had occurred only before President Trump withdrew from the JCPOA.

He made that point in response to allegations that he was inappropriately dealing with the representative of an adversary at a time of significant bilateral hostility. Trump himself accused Kerry of having “illegal” meetings with the Iranian regime.

“Let me be crystal clear,” Kerry told Fox News in Sept. 2018 in response to the charges. “When I met with the Iranians, the policy of the United States was still to be in the Iran deal because the president had not decided – not pulled out.”

In the leaked recording, Zarif did not say whether Kerry had told him about the Israeli military action during one of their face-to-face meetings, or in some subsequent communication between them.

But Trump withdrew from the nuclear deal on May 8, 2018, four months before the Israeli government commented publicly on its strikes in Syria.

So, at the time of Kerry’s last publicly-acknowledged meeting with Zarif – in April 2018 in New York – the Israeli government had not yet spoken publicly about its covert actions against Iranian targets in Syria.

In a speech on the Senate floor on Monday, Sen. Dan Sullivan (R-Alaska) called for Kerry’s removal from Biden’s national security council.

Sullivan said he was astonished to read that Kerry “would reveal the secrets of one of our most important and enduring allies in the region to an avowed enemy, the largest state sponsor of terrorism, a country that was responsible for the killing and wounding and maiming of thousands of American servicemen and women, whose leaders have the blood of American soldiers on its hands.”

Sen. Rick Scott (R-Fla.) in a statement called the allegations “deeply disturbing” and said they “must be explained immediately.”

“Until we have clarity and know the truth, President Biden must remove John Kerry from all access to and briefings on national security intelligence,” said Scott. “If these allegations are true, he must resign.”

“This is disgusting on many levels,” tweeted former U.S. ambassador to the U.N. Nikki Haley. “Biden and Kerry have to answer for why Kerry would be tipping off Iran, the number one sponsor of terror, while stabbing one of our greatest partners, Israel, in the back.”

Rep. Elise Stefanik (R-N.Y.) called for Kerry to be “investigated and prosecuted immediately.”

Ben Rhodes, who served as deputy national security adviser for strategic communications in the Obama’s administration, hit back.

“Republicans pretending to be outraged about John Kerry talking about things that were widely and publicly known at the time is the classic disinformation campaign: try to launder a lie through sufficient right-wing media outrage to get mainstream attention,” Rhodes tweeted.

Pompeo on John Kerry and Iran: Past Secretaries of State Should ‘Get Off the Stage’ (May 13, 2019)