Israel: Iran ‘First and Foremost’ on the Agenda For Biden Visit 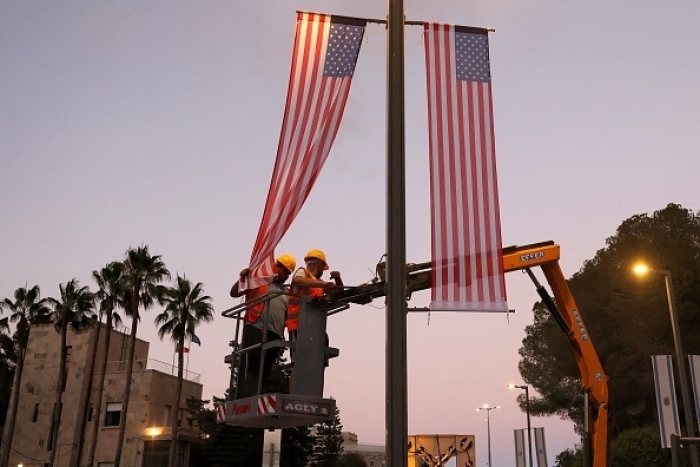 U.S. and Israeli flags are hung above Jerusalem streets ahead of President Biden’s visit to Israel’s capital this week. (Photo by Ahmad Gharabli/AFP via Getty Images)

(CNSNews.com) – Ahead of President Biden’s first presidential trip to the Middle East this week, Israeli Prime Minister Yair Lapid said Sunday that countering the threats posed by Iran will be at the top of his government’s agenda for the visit.

He told a cabinet meeting that Biden’s visit beginning Wednesday “will focus first and foremost on the issue of Iran.”

Noting confirmation at the weekend that Iran has begun enriching uranium to up to 20 percent purity using advanced centrifuges at an underground nuclear facility, Lapid called for a “decisive” response from the international community.

“The international response needs to be decisive: to return to the U.N. Security Council and activate the sanctions mechanism at full force,” he said, alluding to U.N. sanctions that were lifted in early 2016 after the Joint Comprehensive Plan of Action (JCPOA) nuclear deal took effect.

“Israel, for its part, reserves for itself full freedom of action, diplomatic and operational, in the fight against the Iranian nuclear program.” 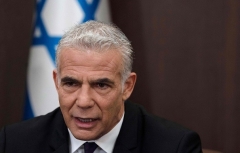 Lapid also pointed to Iran’s sponsorship of anti-Israel terrorism – its support for Hezbollah in Lebanon and Hamas in Gaza, and recent foiled attempts by alleged Iranian terror cells to attack Israeli tourists in Turkey.

“Israel will not stand idly by while Iran tries to attack us. Our security services know how to reach anyone, anywhere – and they will do just that,” he warned.

Lapid said Israel would discuss with Biden and his team “expanding security cooperation against all threats.”

He also expressed the hope that the visit will help to advance deepening ties between Israel and the Arab world – specifically Saudi Arabia, Biden’s destination when he flies out of Israel.

“He will carry with him a message of peace and hope from us,” Lapid said. “Israel extends its hand to all the countries of the region and calls on them to build ties with us, establish relations with us, and change history for our children.”

Biden’s agenda for his visit to Israel, the Palestinian self-rule areas, and Saudi Arabia covers a wide range of issues, including signaling support for a “two-state solution” to the Israeli-Palestinian conflict; broadening regional security coordination; advancing steps towards ending the civil war in Yemen; and dialogue with the leaders of Gulf states and partners on expanding regional economic and security cooperation, increasing oil production, and deterring threats from Iran.

Iran is a major concern for officials in both Jerusalem and Jeddah, where Biden will hold a summit with the leaders of the six Gulf Cooperation Council states – Saudi Arabia, UAE, Kuwait, Qatar, Oman, and Bahrain – as well as Iraq, Jordan and Egypt.

Saudi Arabia and other Gulf states applauded President Trump’s decision in 2018 to withdraw from the Obama-era JCPOA. Like Israel, they viewed the 2015 deal – which lifted sanctions in return for curbs on the regime’s nuclear activities – as empowering Tehran rather than definitively ending the nuclear threat.

As such Biden’s attempts to revive the nuclear accord were not widely welcomed in the region, where a wary eye has been kept on the – so far inconclusive – talks in Vienna aimed at bringing both the U.S. and Iran back into compliance.

On the other hand, an emerging coordinated regional response to Iran’s missile and drone threats would help to counter some of the concerns.

(Saudi Arabia and the UAE in particular have been on the receiving end since 2017 of missile and drone attacks launched by Iran-backed Houthis in Yemen, who have been battling a Saudi-led coalition that includes the UAE. A U.N.-brokered truce came into effect in April.)

On Thursday, National Security Council Coordinator for Strategic Communications John Kirby told reporters, “Bilaterally, we’re talking with nations across the region about air defense capabilities specifically and what we can do to assist with their defense – and then, exploring the idea of being able to kind of integrate all those air defenses together.”

Citing “sources familiar with the plan,” Reuters reported earlier last week that the proposal envisaged the development of a joint detection and notification system to warn countries of aerial threats, “with the help of Israeli technology and U.S. military bases.”

It said the U.S. hoped the plan would also help to facilitate more Israeli-Arab normalization agreements, like those finalized with the UAE and Bahrain during the Trump administration.

In a Washington Post op-ed about his trip, Biden referred to hopes that his visit would help to advance the process.

Noting that he will be the first U.S. president to fly directly from Israel to Saudi Arabia, he wrote, “That travel will also be a small symbol of the budding relations and steps toward normalization between Israel and the Arab world, which my administration is working to deepen and expand.”

The Iranian regime at the weekend condemned the reported plans for Israeli-Arab regional air defense coordination.

“The fact that the U.S. raises and pursues such issues without correctly understanding the realities of the region and merely for the purpose of portraying Iran as a threat and sowing division in the region shows that what matters for Washington is its own illegitimate interests and putting the Zionist regime on life support.”