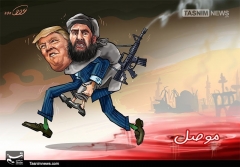 (CNSNews.com) – Iranian officials and state-friendly media responded cautiously Sunday to President Trump’s announcement of the death of ISIS leader Abu Bakr al-Baghdadi, but reactions did include the airing of the regime’s conspiracy theory that the United States created the Sunni terrorist group in the first place.

“Not a big deal! You just killed your creature,” tweeted the regime’s communications minister, Mohammad Javad Azari-Jahromi, in a post directed at Trump.

(Daesh is an Arabic acronym for ISIS.)

Press TV quoted one “commentator” as saying the U.S. could have killed Baghdadi long ago, and another as saying the death of Baghdadi would not change the fact the U.S. was responsible for the rise of such terrorist groups, to be used as weapons against its foes in the region.

The state-owned Tasnim news agency reposted a news report from last February in which an Iraqi lawmaker charged that the U.S. troops in Iraq’s western Anbar province were providing safe haven for the fugitive terrorist.

(Hassan Salem, who represents a party affiliated with the Iranian-backed Shi’ite militia Asaib al-Haq, is leading efforts in Iraq’s parliament to have U.S. forces expelled from the country.)

Tasnim also posted a cartoon depicting Trump, with a gun-toting Baghdadi on his back, striding across what appeared to be blood-soaked earth.

Regime spokesman Ali Rabiei tweeted that the death of Baghdadi would not end ISIS or its ideology, “which was created and flourished with the help of regional petrodollars.”

A slightly more restrained reaction came from Hesamuddin Ashena, a senior advisor to President Hassan Rouhani, who said terrorists like Baghdadi and al-Qaeda’s Osama bin Laden may be dead but their groups “have their roots in cultural, political, economic and intra-regional and inter-regional realities,” and unless those facts change, there is little hope of ending terror.

Meanwhile several Iranian outlets highlighted claims by Russia’s defense ministry to the effect that it had no evidence Baghdadi had in fact been killed, and expressing doubt that a U.S. Special Forces raid had even taken place.

Trump said earlier the U.S. had informed Russia in advance – but without providing the Russians any details – that it was carrying out an operation in northwest Syria, since the U.S. forces had to fly over “Russian-held areas.” He said the Russians had been very cooperative.

The helicopters used in the raid reportedly flew from near Erbil in northern Iraq, crossing airspace controlled by Iraq, Russia, Turkey, and the Assad regime

Trump thanked the Russians, Iraqis, Turks, the Kurdish-led Syrian Democratic Forces (SDF) – and even the Syrian authorities, “because, you know, we’re flying into Syria, and a lot of Syrian people with lots of guns.”

‘Created with the purpose of pitting us against one another’

Supreme leader Ayatollah Ali Khamenei has for years accused the U.S. of having created ISIS to stoke divisions among Muslims and promote its own interests in the region.

Shortly after Baghdadi’s ISIS declared its “caliphate” in Iraq and Syria, the U.S. began carrying out airstrikes against ISIS targets – in Iraq in August 2014, and together with coalition partners in neighboring Syria the following month.

But in October 2014, Khamenei accused the U.S. and Britain of having created both ISIS and al-Qaeda in order to confront Iran, and in a bid to drive a wedge between Sunni and Shi’ite Muslims.

Conspiracy theories circulating across the Middle East that summer prompted the U.S. Embassy in Beirut to post a message on social media saying, “Any suggestion that the United States ever considered recognizing the Islamic State of Iraq and the Levant as anything other than a terrorist organization, or had any role in its creation, is patently false. Allegations circulating in Lebanon to the contrary are a fabrication.”

In mid-2015 Khamenei repeated the allegation, saying at an Eid al-Fitr (end of Ramadan) gathering of government officials and Islamic ambassadors that he did not buy the U.S. claim to be trying to defeat ISIS.

“It is you who are the defenders of terrorism!” Khamenei said in comments directed at the U.S. and its Western and Sunni Arab allies. “It is you who have created Daesh. It is you who train terrorists.”

“These criminal organizations – including al-Qaeda, Daesh and the like – were created with the purpose of pitting us against one another and making nations confront each other,” he said. “This is the transgressing and treacherous hand of the enemy.”

In late 2015, Khamenei revisited the theme, again in a speech to ambassadors from Muslim countries.

“Incumbent U.S. officials are opposed to Islam in principle and, despite their remarks, they seek to sow discord among Muslims – an example of which is the creation of terrorist sects like Daesh and other sects that have been created with money by U.S. affiliates and their political assistance,” he said. “They have given rise to the current catastrophes in the Muslim world.”

The Iranian regime portrayed itself as being in the forefront of the fight against the Sunni jihadists of ISIS. Iranian-backed Shi’ite militias in Iraq and elements of Iran’s Islamic Revolutionary Guard Corps (IRGC) Qods Force supported Iraq’s Shi’a-led government in its campaign against ISIS in that country.