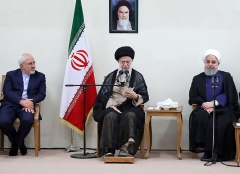 (CNSNews.com) – A potentially explosive trial is due to open in Belgium later this week, despite evident attempts by the Iranian regime to prevent revelations of the extent of its terror activities on European soil.

Due to appear in court in Antwerp is Assadollah Assadi, once a diplomat accredited to the Iranian Embassy in Vienna, and three individuals of Iranian extract accused of conspiring with him to bomb a large gathering near Paris of an exiled Iranian dissident movement, attended by a number of international dignataries.

The regime has accused the governments concerned in the affair – Belgium, Germany, France, and Austria – of wrongdoing, including violation of the Vienna Convention on diplomatic immunity.

It is angry with Germany for arresting Assadi and extraditing him to Belgium; Belgium for putting him on trial; Austria for revoking his diplomatic immunity; and France for freezing his assets as well as those of a senior Iranian Ministry of Information and Security (MOIS) official.

While not itself on trial, the regime is in the crosshairs. Belgian investigators believe Assadi – suspected of being a MOIS agent – was acting under orders from Tehran, not as a rogue operative. France’s Le Monde recently reported that the head of Belgium’s state security service VSSE had informed the prosecutor that the planned bombing “was conceived in the name of Iran and under its leadership.”

The Iranian foreign ministry has repeatedly denied any involvement in the alleged plot to bomb the National Council of Resistance of Iran (NCRI) rally near Paris on June 30, 2018, and has blamed the legal action and sanctions on “dissidents, ill-wishers and saboteurs.”

Foreign Minister Javad Zarif called it “a sinister false flag ploy,” insinuating that enemies of the regime were trying to sabotage relations between Iran and Europe – especially France and Germany, both parties to the nuclear deal.

According to the prosecutors’ case, Assadi traveled to Luxembourg to meet up with an Iranian couple living in Belgium, Amir Sadouni and Nasim Naami. At the rendezvous he allegedly handed them a quantity of the powerful homemade explosive TATP and the equivalent in euros of roughly $14,000.

Assadi then drove back into Germany (presumably on his way back to Austria), and the couple returned to their hometown of Antwerp. Belgian police intercepted the couple after they left their home en route to Paris, on the day of the NCRI’s “Free Iran” rally in Villepinte near the French capital. In their car police found the TATP bomb and an ignition device. They were charged with “attempted terrorist murder and the preparation of a terrorist offense.”

Alerted, German police arrested Assadi at a highway gas station in Bavaria. Despite Iranian entreaties, a German court extradited him to Belgium, ruling that any possible immunity he could claim was not valid outside of the country where he was accredited – in Assadi’s case, Austria.

A fourth man, a Belgian-Iranian named Mehrdad Arefani, was arrested in Villepinte, France, and transferred to Belgium, where all four are due to stand trial on Friday.

The NCRI and other foes of the regime have long accused it of using its embassies to launch terror or assassination operations abroad. A group of more than 70 lawmakers from parliaments across Europe called earlier this year on governments to shut down the regime’s embassies.

Iranian dissidents were assassinated in the Netherlands in 2015 and 2017, and Denmark in 2018 foiled a plot to kill a dissident there.

Assadi is believed to be the first accredited Iranian “diplomat” to face trial in Europe for terrorism. But in 1997, a MOIS operative named Kazen Darabi was convicted and sentenced to life imprisonment in Germany for the assassination of Iranian Kurdish dissidents in a Berlin restaurant in 1992. The German court found that orders for the killing had come from the top levels of the regime.

Germany freed and deported Darabi and a convicted Lebanese Hezbollah accomplice after they had served just 15 years.