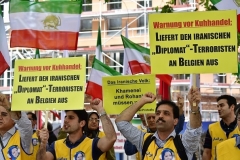 NCRI supporters demonstrate in Berlin in July 2018, calling on Germany to extradite to Belgium an Iranian diplomat accused of involvement in a bomb plot. (Photo by Tobias Schwarz/AFP via Getty Images)

(CNSNews.com) – A trial beginning in Belgium on Wednesday could lift the lid on Iranian regime terror plotting in Europe, according to an exiled dissident group that has been a major target of the campaign.

For the first time, an accredited Iranian diplomat – alleged also to be a senior official in the Ministry of Intelligence and Security (MOIS) – is going on trial directly accused of involvement in terror on European soil.

A court in Antwerp on Wednesday confirmed charges of "attempted murder of a terrorist nature" and "taking part in the actions of a terrorist organization" against Assadollah Assadi and three co-accused, who remain in custody and will reappear later this year.

Two years ago Assadi, a diplomat based at the Iranian Embassy in Vienna, was arrested while driving through Germany, after Belgian authorities issued a European arrest warrant.

A day earlier, Belgian police had intercepted a Belgian-Iranian couple, half an hour after they had left their home in Antwerp en route to Paris, and recovered in their vehicle 500 grams – a significant amount – of the powerful homemade explosive TATP and an ignition mechanism.

Belgium’s State Security Service (VSSE) believed they were heading for the venue, in Villepinte near Paris, of a “Free Iran” rally, an annual event organized by the National Council of Resistance of Iran (NCRI) opposition group.

Investigators suspect that Assadi handed the explosives over to the couple at a rendezvous hours before their arrest – and on that basis issued the warrant for the Iranian diplomat’s arrest. 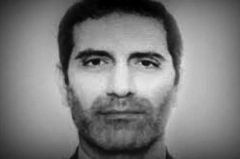 Asadollah Assadi was accredited as a ‘third counselor’ to the Iranian Embassy in Vienna, Austria. (Photo: Twitter/NCRI)

Assadi was driving through Germany in a rental car, presumably on his way back to Vienna, when stopped at a highway gas station and taken into custody.

Assadi was named in the Austrian foreign ministry’s list of diplomatic corps as a “third counselor” at the Iranian embassy. The NCRI claims his actual role there was MOIS head of station.

After the Germans arrested him, the Iranian regime claimed that the entire episode was a “false flag” operation designed to harm Iran-European relations.

Tehran said Assadi had diplomatic immunity and should be repatriated. But a German court disagreed, saying any immunity he could claim was not valid outside of the country where he was accredited.

Instead, Assadi was extradited to Belgium where the couple, named in Belgian media reports as Amir Sadouni and Nasim Naami, had been charged, according to the VSSE, for terror-related offenses.

A fourth suspect, arrested in Villepinte, France, was also transferred to Belgium. He was named as Mehrdad Arefani, a Belgian of Iranian origin described as a “suspected accomplice” of the plotters.

Allegations of Iranian terror plotting in Europe put strains on Tehran’s relations with France, Belgium, Germany and Austria – as well as Denmark and the Netherlands, where other assassination plots were also exposed.

In October of that year, France froze Assadi’s assets as well as those of a senior MOIS official in Tehran, Saeid Hashemi Moghadam, and the assets of the MOIS internal security division.

Three months later the European Union imposed sanctions on the same three targets – Assadi, Moghadam, and the MOIS internal security division – in what it said was a “response to recent foiled attacks on the European soil.”

“Over the past two years, the clerical regime has made every effort to prevent Assadi’s trial and secure his release,” the NCRI’s secretariat said on Tuesday. “Measures such as diplomatic pressure, economic incentives, taking European nationals’ hostage, and making terrorist threats failed and backfired.”

The NCRI claims that the foiled bomb plot was approved by the regime’s Supreme National Security Council, a body headed by President Hassan Rouhani, at the orders of supreme leader Ayatollah Ali Khamenei.

On that basis, it says Khamenei, Rouhani, as well as Foreign Minister Javad Zarif and MOIS Minister Mahmoud Alavi, should also be prosecuted.

Although Assadi is believed to be the first Iranian diplomat to face trial in Europe for terrorism, a MOIS operative was put on trial, convicted, and sentenced to life imprisonment in Germany in 1997 for the assassination of Iranian Kurdish dissidents in a Berlin restaurant five years earlier.

Germany freed and deported Kazen Darabi and a convicted Lebanese accomplice after they had served just 15 years.