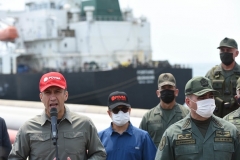 (CNSNews.com) – The third of five Iranian tankers ferrying gasoline to the embattled Maduro regime entered Venezuelan waters on Wednesday, as the two rogue regimes celebrate their collaboration in defiance of U.S. sanctions.

Touting the purported significance of the development, an advisor to Iranian Foreign Minister Javad Zarif, Medhi Sanaei, said it signaled the end of the “unipolar” world system.

Carrying a total of more than 1.5 million barrels of gasoline, the five Iranian-flagged vessels transited the Gibraltar Strait several weeks ago and have been plying their way across the Atlantic towards Venezuela.

The first two tankers arrived at the weekend, and were escorted during final approach by Maduro regime warplanes and naval vessels.

The tanker Fortune docked at the state-owned petroleum company PdVSA’s El Palito oil refinery west of Caracas, while vessel trackers locate the Forest near the PdVSA’s Paraguana refinery complex further to the west.

The third tanker, Petunia, was tracking south of Grenada on Tuesday, and the last two, Faxon and Clavel, are still crossing the Atlantic.

Iran and the Maduro regime are both subject to U.S. sanctions. The U.S. reimposed sanctions on Tehran after withdrawing from the Obama-era nuclear agreement, in a bid to compel the regime to change its belligerent behavior and policies across the region.

U.S. sanctions targeting Maduro’s socialist regime are designed to speed up the removal of a leader whom the U.S. and almost 60 other governments do not recognize as Venezuela’s legitimate president.

Welcoming the Fortune at El Palito was a regime delegation led by Defense Minister Vladimir Padrino and Industry Minister Tareck El Aissami. The two Maduro loyalists are both sanctioned by the U.S., Padrino in 2018 for helping Maduro retain his grip on power, and Aissami in 2017 for narcotics trafficking.

Earlier this year, Aissami was accused in unsealed U.S. indictments of a series of crimes designed to circumvent U.S. sanctions against Maduro.

Nicolás Maduro thanked Iran in a televised address Sunday, and described the two nations as “revolutionary peoples who will never kneel down before the North American empire.”

Iranian Ambassador to Venezuela Hojat Soltani posted a photo on Twitter of a meeting between supreme leader Ayatollah Ali Khamenei and the late Venezuelan President Hugo Chavez, under the words, “Two leaders, two countries, and two revolutions that care for each other.”

The White House National Security Council at the weekend called the purchase of Iranian gasoline “an act of desperation by the corrupt and illegitimate Maduro regime.”

“It will not stop Venezuela’s chronic fuel shortages or alleviate the suffering that Maduro has inflicted on the once prosperous people of his country,” it said on its Twitter feed.

Reuters earlier this month quoted an unnamed Trump administration official as saying the Iranian oil transfer to the Maduro regime was “not only unwelcome by the United States but it’s unwelcome by the region, and we’re looking at measures that can be taken.”

The official did not elaborate, but Iranian President Hassan Rouhani warned the U.S. not to interfere with the ships.

“If our tankers in the Caribbean or anywhere in the world face trouble caused by the Americans, they will also be face trouble,” state media quoted Rouhani as saying during a phone conversation with the emir of Qatar.

He said Iran reserves the right to defend its national sovereignty and defend its interests, adding, “We hope the Americans will not make a mistake.”

Although U.S. officials have announced no plans to try to intercept the tankers, the Maduro regime’s ambassador to the U.N., Samuel Moncada, tweeted on Tuesday, “What authority does Trump have to attack Iranian vessels? None.”

“If he attacked, he’d be perpetrating an act of war, a crime of aggression. Iran and Venezuela are sovereign countries exercising their freedom of navigation and legal trade without colonial impositions.”

The move came shortly after the unsealing of U.S. indictments against Maduro and other senior regime figures, including Aissami, for alleged narco-trafficking.

Earlier this month some of those U.S. military assets were operating some 800 miles to the north-west of Venezuelan territorial waters.