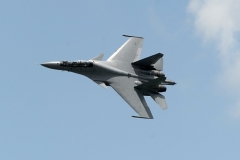 A Russian-made Sukhoi Su-30 fighter jet. The U.S. Defense Intelligence Agency says Iran may look to buy some once the U.N. arms embargo is lifted. (Photo by Roslan Rahman/AFP via Getty Images)

(CNSNews.com) – In line with the timetable set by the Obama administration and its Iran nuclear accord partners, the U.N. embargo on conventional arms transactions with Tehran expired on Sunday, prompting celebration from the regime and claims of a victory over the United States, but both an appeal and a warning from the Trump administration that those who enter into such deals will expose themselves to U.S. sanctions.

“Any nation that sells weapons to Iran is impoverishing the Iranian people by enabling the regime’s diversion of funds away from the people and toward the regime’s military aims,” Secretary of State Mike Pompeo said in a statement. “Any country that now challenges this prohibition will be very clearly choosing to fuel conflict and tension over promoting peace and security.”

Foreign Minister Javad Zarif called it a “momentous day,” while insisting that “weapons in Iran have always been defensive” and saying that Iran “does not initiate wars” as others do.

The U.S. has for decades considered the Iranian regime to be the world’s leading sponsor of terrorism. The regime is also involved militarily, mostly through proxies, in Lebanon, Syria, Iraq, and Yemen.

In addition to appealing to governments and arms manufacturers to consider the repercussions for the Iranian people and regional stability of selling weapons to the regime, Pompeo reminded them of potential consequences closer to home.

“The United States is prepared to use its domestic authorities to sanction any individual or entity that materially contributes to the supply, sale, or transfer of conventional arms to or from Iran, as well as those who provide technical training, financial support and services, and other assistance related to these arms,” he warned.

Pompeo cited an executive order signed by President Trump last month, after the administration announced a so-called “snapback” of U.N. sanctions that had been lifted under the nuclear agreement.

Russia and China, long Iran’s most powerful diplomatic allies, are thought most likely now to explore arms sales agreements with the regime. (European manufacturers in principle will continue to be constrained by a separate European Union arms embargo, which as it stands is scheduled to remain in force until October 2023.)

In a report last year the U.S. Defense Intelligence Agency said Iran was already then discussing potential deals with Russia and, to a lesser extent, with China, for once the embargo ends. It forecast that Iran could look to buy from Russia Sukhoi Su-30 fighters and Yakovlev-130 trainers, as well as T90 main battle tanks, and noted Tehran’s interest in buying the advanced S-400 air defense system.

Coming a fortnight before the U.S. election, the embargo expiry serves to underline the differences between the approaches to Iran of Trump and his Democratic presidential rival, Joe Biden.

Trump, who called the Joint Comprehensive Plan of Action (JCPOA) “a horrible, one-sided deal,” withdrew from it in 2018 and has ramped up economic pressure on the regime; Biden has pledged to return to the JCPOA “if Tehran returns to compliance,” and to “strengthen and extend it” with support from allies.

The other JCPOA partners – Russia, China, Britain, France, and Germany – have all rejected the validity of the U.S. sanctions “snapback,” given Trump’s withdrawal.

But the administration is sticking with its stance that the sanctions have now been restored, and that the U.S. will impose “secondary” sanctions on any third country government, company, or financial institution that does business with Iran’s defense, missile, and nuclear sectors.

The JCPOA was enshrined by U.N. Security Council resolution 2231. Ninety days after the resolution was unanimously passed was the JCPOA’s “adoption day,” October 18, 2015.  Sunday marked the fifth anniversary, and the day which the drafters of the deal set as a suitable termination date for the restriction of arms sales to and purchases from the regime.

The U.S. suffered two diplomatic defeats in the Security Council relating to Iran in recent months:

-- its attempt in August to extend the arms embargo indefinitely beyond October 18 failed, when Russia and China vetoed the measure, and 11 of the 12 remaining council members abstained.

-- its bid last month to invoke sanctions “snapback” won no support in the Security Council, and U.N. secretary-general Antonio Guterres said that, given the split in the council the secretariat would not take steps to reimpose the sanctions.

In the Trump administration’s view, the sanctions are nonetheless restored, and include not just an arms embargo but also other previously lifted restrictions, such as those targeting the regime’s ballistic missile activities.

In the Iranian regime’s view, however, the JCPOA timetable continues to move ahead, and Zarif noted that Sunday’s embargo expiry is set to be followed by the termination of missile-related restrictions in 2023.