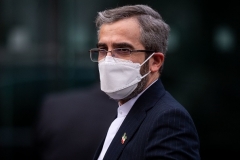 (CNSNews.com) – As Iran nuclear deal talks got underway in Vienna on Monday after a five-month hiatus, Iran’s chief negotiator claimed that all of the participating countries in a first meeting backed Tehran’s demands that a lifting of “illegal” U.S. sanctions should be top priority.

The countries represented in the meeting referred to by deputy foreign minister and nuclear negotiator Ali Baqeri were Russia, China, Britain, France, and Germany.

The U.S. is represented in Vienna by a delegation led by special envoy Robert Malley, but it was not physically present in Monday’s talks. (At the insistence of the Iranian regime, all Iran-U.S. interaction up to now has been “indirect.”)

“To me, it is a considerable achievement that all the participating countries in the P4+1 accepted the rightful demand of the Islamic Republic of Iran,” the Mehr news agency quoted Baqeri as saying late on Monday. “And they stressed and clarified on, that at first the status of the illegal sanctions imposed by the U.S. regime against our people is decided upon, and then there should be discussion, talks and decision-making on the other issues.”

The “P5 +1,” those countries plus the United States, were the parties that negotiated the 2015 Joint Comprehensive Plan of Action (JCPOA), a deal that offered Iran certain sanctions relief in return for some restrictions on its nuclear programs.

President Trump withdrew from the agreement in 2018 and restored the sanctions.

His successor is seeking to re-enter the JCPOA, which would require both the U.S. and Iran to return to compliance: The U.S. would have to lift sanctions again while Iran would reverse what it euphemistically calls its “remedial measures” – the incremental breaching of its JCPOA commitments, including exceeding the limits, in both quantity and levels of purity, of enriched uranium stockpiles allowed. 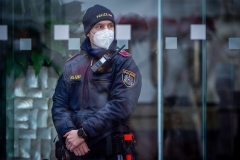 An Austrian police officer stands guard at the entrance of the Coburg Palais, the venue for the Iran nuclear deal talks in Vienna, on Monday. (Photo by Vladimir Simicek/AFP via Getty Images)

Six rounds of talks were held in Vienna between April and June, but since Iran’s June elections the new government led by President Ebrahim Raisi has refused to resume them, until now.

At a State Department briefing on Monday, deputy spokesperson Jalina Porter was asked to respond to Baqeri’s claim that “all” of the parties in Monday’s talks accepted Iran’s stance on the sanctions – that they were “illegal” and that their lifting should be the first priority.

She did not address the substance of the question, however, saying she would not “get into the specific details on the talks.”

“The Biden administration has been consistent, and we’ve also been sincere and steadfast in pursuing a path of meaningful diplomacy to achieve a mutual return to compliance with the JCPOA and also to address our full range of concerns with Iran,” Porter said.

Support for the regime’s position on sanctions has long come from China and Russia, and a Chinese foreign ministry spokesman reiterated that on Monday.

“The U.S., as the culprit of the Iranian nuclear crisis, should naturally remove all illegal unilateral sanctions on Iran and third parties including China,” Wang Wenbin told a briefing in Beijing.

The three European parties to the deal, U.S. allies, have taken a more nuanced stand, even while working to salvage the JCPOA.

The question of sequencing lies at the heart of the effort to get the JCPOA back up and running. The regime has said from the outset that it views the removal of the sanctions as a prerequisite for it reversing its “remedial measures.”

For their part, Biden administration officials have repeatedly referred to a “mutual return to compliance.”

Asked Monday if the U.S. was ready to lift all the sanctions, as Iran wants, Porter declined to “get into the details or any hypotheticals from here.”

In a Financial Times op-ed early this week, Baqeri wrote that the regime’s first goal “is to gain a full, guaranteed and verifiable removal of the sanctions that have been imposed on the Iranian people. Without this, the process will continue indefinitely.”

“From our perspective, the principle of ‘mutual compliance’ cannot form a proper base for negotiations since it was the U.S. government which unilaterally left the deal,” he argued.

In a video message on Monday, Israeli Prime Minister Naftali Bennett charged that Iran’s goal in returning to the table was “to end sanctions in exchange for almost nothing.”

“Iran doesn’t hide its intentions. Just a couple of days ago the senior commander of Iran’s armed forces declared, and I quote, ‘We will not back off from the annihilation of Israel, not even one millimeter.’”

Bennett noted that Iranian forces had opened fire on citizens in Isfahan in recent days for protesting over water shortages, and said, “Such a murderous regime should not be rewarded.”

“Despite Iran’s violations and undermining of the nuclear inspections, Iran will be arriving at the negotiation table in Vienna, and there are those who think they deserve to have the sanctions removed and hundreds of billions of dollars poured right into their rotten regime.”

“They’re wrong,” Bennett said. “Iran deserves no rewards, no bargain deals and no sanctions relief in return for their brutality.”

“I call upon our allies around the world: Do not give in to Iran’s nuclear blackmail.”