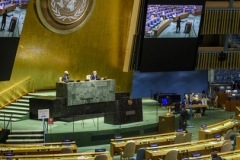 The U.N. General Assembly holds an election on Tuesday for 15 members of the Human Rights Council. (UN Photo/Loey Felipe)

(CNSNews.com) – Human rights advocates chalked up a partial victory in New York on Tuesday when Saudi Arabia failed to win a seat on the U.N. Human Rights Council. But despite a strong lobbying effort China, Russia, Cuba, Pakistan, and Uzbekistan were ushered onto the world body’s top human rights watchdog for three-year terms beginning January 1.

The outcome of the secret ballot election by the full U.N. General Assembly means that more than one-quarter of the members of the Geneva-based HRC next year – 13 of the 47 – will be autocracies graded as “not free” by Freedom House. The Washington-based democracy advocacy group grades countries each year on political freedoms and civil liberties.

Five of next year’s members – Eritrea, Somalia, Libya, Uzbekistan, and China – fall in the bottom 12 of the 195 countries evaluated in Freedom House’s latest assessment.

The Trump administration exited the HRC in 2018, citing among other things the poor quality of its membership.

“These elections only further validate the U.S. decision to withdraw and use other venues and opportunities to protect and promote universal human rights,” said Secretary of State Mike Pompeo, noting that despite appeals the General Assembly had “once again elected countries with abhorrent human rights records, including China, Russia, and Cuba.”

Apart from the 13 “not free” HRC members next year, another 15 will be among those ranked as “partly free,” and the remaining 19 will be “free” democracies. With the exception of 2016, when 18 of the 47 members were “free,” the council in 2021 will have the smallest caucus of free democracies of any year in its 14-year history.

Membership terms are staggered, so 15 of the 47 seats were filled in Tuesday’s election – four each for Africa and Asia, three for Latin America, and two each for Eastern Europe and the Western Europe and Others (WEOG) group.

Asia was the only group that provided a contest – five candidates for four seats – and Saudi Arabia fared worst, receiving 90 votes in the 193-member General Assembly. The four Asia seats went to China (139 votes), Nepal (150), Pakistan (169) and Uzbekistan (169).

U.N. Watch has argued that it would be better to have all 193 U.N. member-states serve on the HRC than continue holding elections which provide the opportunity to unsuitable candidates to tout their election success as evidence of global support.

The U.N. mission of Cuba’s communist regime on Tuesday duly noted in a tweet that it had received 170 votes, adding, “Thanks to those who trust in our work to defend with own voice, dialogue and cooperation, in favor of all rights for all people.”

Before the vote, a spokesman for General Assembly president Volkan Bozkir of Turkey was asked during a briefing about the fact rights-abusers were running for seats.

Brenden Varma did not directly answer the question, but read out a statement saying, in part, “The General Assembly takes into account the candidate states’ contributions to the promotion and protection of human rights as well as their voluntary pledges and commitments in this regard. With membership on the council comes a responsibility to uphold high human rights standards.”

After the vote, however, Bozkir himself tweeted his congratulations to all 15 successful candidates by name.

The Associated Press quoted an HRC spokesman as saying on Tuesday, “If a state thinks they can conceal the human rights violations they may have committed, or escape criticism by sitting on the Human Rights Council, they are greatly mistaken.”

In practice, however, of the more than 380 country-specific resolutions adopted by the HRC since its creation in 2006, not one has criticized the human rights records of China, Russia, Cuba, or many other countries with poor records. More than 75 have targeted Israel alone.

And of 28 “special sessions” held by the HRC since 2006, Israel was the focus of eight, more than any other single country. Abuses in Syria and Burma prompted five and two special sessions respectively, while no special session has been called to examine human rights violations in Iran, China, North Korea, Cuba, Russia, Turkey, Saudi Arabia, or numerous other countries.

The HRC membership next year will be: