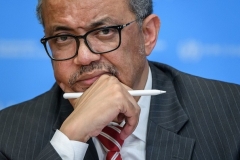 (CNSNews.com) – The head of the World Health Organization on Thursday announced an independent panel of inquiry into the coronavirus pandemic, making it clear that it would examine the global response, and not just the actions of the agency he leads.

“It is time for a very honest reflection,” a visibly-emotional director-general Tedros Adhanom said in a video briefing to member-states. “All of us must look in the mirror – WHO, every member-state, all involved in the response. Everyone.”

Tedros was speaking days after the Trump administration formally lodged notice to withdraw from the Geneva-based organization, a move due to take effect from next July. President Trump has sharply criticized WHO’s handling of the crisis, describing it being under China’s sway, and saying it has refused to agree to make badly-needed reforms.

Should it go through, the U.S. departure would cost the WHO its single biggest funder – currently accounting for more than 15 percent of the total budget – since its creation in 1948.

The independent panel announced Thursday was mandated by a resolution adopted by the WHO’s annual World Health Assembly last May, calling for an “independent and comprehensive” review of the COVID-19 pandemic.

A WHO spokesman stressed after the briefing that its establishment was not linked to U.S. criticisms, and that the review did not amount to “an evaluation of WHO.”

“The panel has been set up to review experience gained and lessons learned from the WHO-coordinated international health response to COVID-19,” the spokesman said. “This involves the global response, including but not limited to, WHO.”

Tedros gave a grim assessment of the status of the pandemic, the result of an outbreak that emerged in the Chinese city of Wuhan late last year.

“In most of the world the virus is not under control. It is getting worse,” he said. “More than 11.8 million cases of COVID-19 have now been reported to WHO. More than 544,000 lives have been lost. And the pandemic is still accelerating.”

(Those figures have now passed 12.2 million cases, and 554,000 deaths, according to Johns Hopkins University’s real-time database.)

“We’re in the midst of this battle, the battle of our lives, and we have to do better,” he said. “Not just now, but for the future. Because these threats will never stop, and in all likelihood they will get worse. But it is in our hands; we make the choices.”

The panel announced on Thursday, to be called the Independent Panel for Pandemic Preparedness and Response (IPPR), will be headed by former Liberian President Ellen Johnson Sirleaf (2006-2018) and former New Zealand Prime Minister Helen Clark (1999-2008).

They will select other panel members and an independent secretariat will be set up to support the investigation, Tedros said.

He pledged to ensure that the WHO was “an open book,” fully accessible to the panel, and called on member-states too “to open up and show them everything as an open book, so we understand honestly and truthfully.”

“There’s a very real job to do, which is to look at how the WHO has been able to lead, does it have the right mechanisms, what actually happened here – and there’s a lot of politics in that.”

She recalled that during the Ebola crisis, the U.N. Security Council passed a resolution in 2014 declaring Ebola a threat to global peace and security – the first time the council had ever designated a health issue as such – and calling on every member-state to step up.

The political environment was very different in this case, she said, apparently alluding to the deep divisions between veto-wielding permanent members China and the U.S.  “You can’t get agreement on such a resolution now.”

Clark said she has watched the WHO over recent months “day after day appeal to member-states to try to head off what was happening, and I’ve seen a lot not listening. So I think while we can focus on the role of WHO, inevitably how member-states responded has to come into the frame here.”

She responded cautiously when asked about likely cooperation from the U.S., given its announced withdrawal from WHO, but noted that the U.S. Centers for Disease Control and Prevention works closely with WHO and expressed the hope that the panel would be able to engage with “elements” like the CDC.

Clark said she expects most of the panel’s work will have to be done virtually.

Tedros said the panel would present an interim report in November, and then its “substantive” report would be presented at next year’s WHA.

Separately from the IPPR initiative, WHO experts are visiting China this weekend to lay the groundwork for investigations on the ground aimed at identifying the “zoonotic source” of the outbreak – how the coronavirus was able to jump from animals to humans.