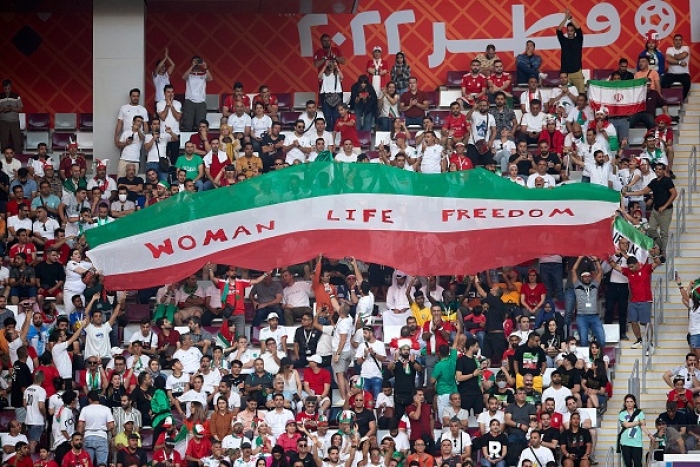 Iranian soccer fans hold up a banner in support of the protests in their homeland, during the World Cup game between Iran and England in Doha, Qatar on Monday. (Photo by Juan Luis Diaz/Quality Sport Images/Getty Images)

(CNSNews.com) – As a soccer World Cup dogged with controversy continued on Monday, the sight of Iran’s national team standing silent during the playing of their national anthem before their opening game in Doha attracted significant media and social media attention.

But in Iran, media outlets largely ignored what appeared to be a gesture of solidarity with anti-regime protests that have gripped the country for more than two months.

Instead, press coverage in the soccer-mad country either focused narrowly on the game itself, or dedicated column inches to hardly-remarkable reports about Israeli journalists in Qatar getting an unfriendly reception from some Arab soccer fans, who “chanted their support for Palestine.”

Immediately after the English team sang spiritedly along to “God Save the King,” Iran’s national anthem was announced. The anthem, adopted in 1990, includes a reference to the “Imam” – Ayatollah Ruhollah Khomeini – and the expectation that the Islamic Republic he founded will be eternal.

As the camera panned along the line of impassive, unsmiling Iranian players, the team’s fans in the stadium clapped and yelled and some made thumbs-down or victory signs.

It was not clear whether they were doing so in support or otherwise of the team’s gesture – or both. But some Iranian fans unfurled a large banner bearing what has become a popular rallying cry in the protests at home: “Women. Life. Freedom.”

(Four years ago, at the 2018 World Cup in Russia, Iran’s team members sang enthusiastically along during the playing of the national anthem.)

On Monday, Iran went on to deliver its poorest performance yet in a World Cup game, losing to England 6-2 – although the loss to injury of the Iranian goalkeeper early on did not help. Iran is in 20th place in the current FIFA world rankings; England is 5th.

(Iran and England share a group with Wales and the United States, so the Iranians will play the U.S. team in a week’s time. The U.S. and Wales drew their opening game on Monday 1-1.)

Members of the Iranian team have faced reporters’ questions in recent days about their view on the situation at home, where more than 350 people including dozens of children, have been killed and thousands have been detained as the regime cracks down on protests.

The protests were sparked by the death in custody of a young woman arrested by the “morality policy” for improper wearing of the hijab, and spread across the country. The regime accuses the U.S., Israel, and other “enemies” of inciting the unrest.

On Sunday, the captain of the Iranian team, Ehsan Hajsafi, during a press briefing voiced sympathy for “all the bereaved families of Iran”

“They should know that we are with them, we support them and we sympathize with them,” he said.

“We cannot deny the conditions – the conditions in my country are not good and the players know it also,” Hajsafi  said. “We are here but it does not mean that we should not be their voice, or we must not respect them.”

In a column for Iran’s state-funded Press TV, published before Monday’s game, Tehran-based journalist Syed Zafar Mehdi wrote that the national team has been placed “under tremendous psychological pressure the past few weeks amid a relentless campaign by hostile forces in the West to de-legitimize them and affect their morale ahead of the World Cup.”

‘Business as usual’ with Qatar

As the month-long World Cup got underway this week, Secretary of State Antony Blinken was in Qatar for strategic dialogue talks – and to watch the U.S.-Wales game.

President Biden last March designated Qatar, a key ally of Iran (and the Muslim Brotherhood and Hamas), as a major non-NATO ally.

“Maintaining ‘business as usual’ with Qatar undermines [the] U.S. position,” the advocacy group United Against a Nuclear Iran (UANI) said on Monday, noting that Qatar maintains strong relations with the regime in Iran, including its Islamic Revolutionary Guard Corps (IRGC), whose Basij militia is playing a key role in the attempt to crush the protests.

UANI also recalled that the Emir of Qatar last month hosted Iran’s vice president for economic affairs, former IRGC chief Mohsen Rezai, who is wanted by Argentina for suspected involvement in the deadliest terrorist attack in the country’s history – the 1994 suicide truck bombing of a Jewish community center in which 85 people were killed.

“Despite Tehran’s behavior, Qatar’s position on Iran remains unchanged, threatening the security of the United States and its allies and undermining President Biden’s commitment to stand with the Iranian people,” UANI said. “The U.S. should revoke Qatar’s major non-NATO ally status until Doha demonstrates that its commitment to counterterrorism extends beyond mere words.”

In a fact sheet, the State Department characterized Qatar as “one of the United States’ closest military partners in the region” – its Al-Udeid Air Base serves as the forward headquarters of Florida-based U.S. Central Command – an “active partner in the Global Coalition to Defeat ISIS and countering violent extremism,” and a country that has “demonstrated its commitment to combat the financing of terrorism.”

It also said the U.S. “greatly appreciates Qatar’s ongoing support for the Palestinian people and the stabilization of Gaza.”

The fact sheet made no mention of the Qatari regime’s longstanding support for Hamas, a U.S.-designated foreign terrorist organization.