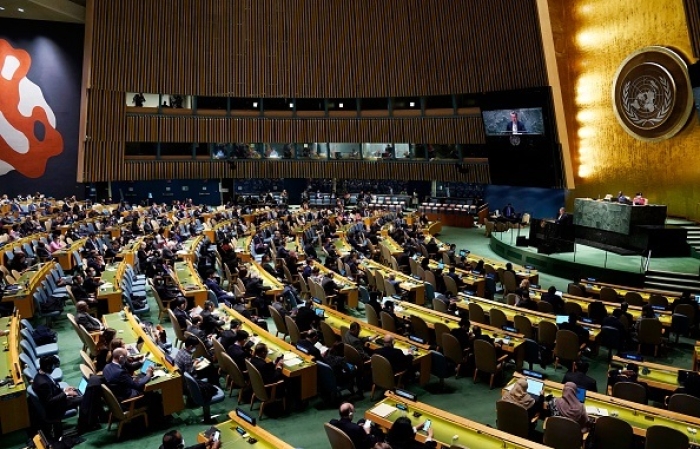 (CNSNews.com) – The U.N. General Assembly in a historic vote on Thursday voted 93 to 24 to suspend Russia from the Human Rights Council, in response to its invasion of Ukraine.

Under the resolution that created the Geneva-based HRC in 2006, a member “that commits gross and systematic violations of human rights,” can be suspended, in a vote by two-thirds of the “present and voting” members of the assembly. With 117 countries voting “yes” or “no” the required number to pass was 79 votes.

Abstentions did not count in the tally. Nonetheless, 54 countries chose not to support or oppose the measure. 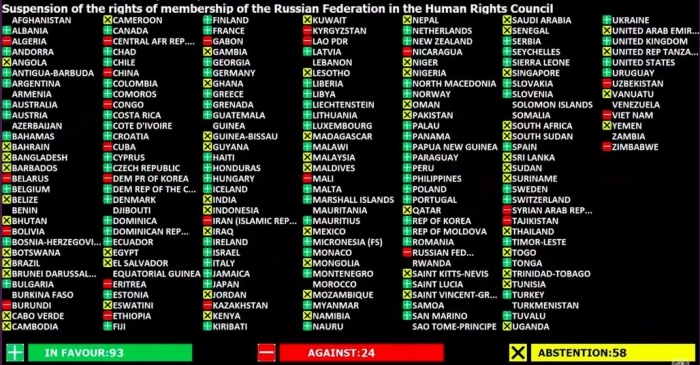 Before the vote, Russia’s allies and partners lined up to slam the attempt to oust it from the HRC, accusing the West of violating principles of non-politicization, universality, and non-selectivity, and threatening the global human rights architecture.

They included China, Kazakhstan, Cuba, North Korea, Iran, Belarus, the Maduro regime in Venezuela, and the Assad regime in Syria.  Some of these countries have themselves been members of the HRC despite widely-criticized human rights records. China, Cuba, Venezuela and Kazakhstan are current members. (In the end, Venezuela did not cast a vote.)

The Cuban delegate noted that Havana had opposed the suspension mechanism from the outset, on the grounds it would be abused. He charged that the United States had never be suspended from the HRC, despite what he said were massive human rights abuses including the decades-long embargo against Cuba.

Some delegates argued that the step was premature, that allegations of atrocities and abuses should be investigated impartially before a decision was made on Russia’s membership in the council.

Some worried that suspending Russia from the HRC would weaken multilateralism, or harm efforts to find a diplomatic resolution to the war.

The resolution to suspend Russia was cosponsored by 58 member-states, mostly democracies – with the surprise last-minute addition of Burma.

Only once before in the HRC’s 16-year history has a member been suspended – Muammar Gaddafi’s Libya 11 years ago – although that decision was taken “by consensus,” with no country calling for a recorded vote.

Russian delegate Gennady Kuzmin, speaking before the vote, noted that U.N. secretary-general Antonio Guterres had himself warned that excluding Russia from the HRC could set a “dangerous precedent.”

“Russia throughout its membership in the Human Rights Council has consistently defended the principle of cooperation based on mutual respect and equal status as one of the main foundations of the human rights architecture,” Kuzmin said.

Addressing the assembly before the vote, Ukrainian Ambassador Sergiy Kyslytsya referred to the genocide in Rwanda, whose 28th anniversary is currently being observed.

In a message directed at countries planning to abstain in the vote, he quoted from the late Nobel peace prize laureate Elie Wiesel’s 1999 White House speech on “The perils of indifference.”  He read, in part:

“… indifference is always the friend of the enemy, for it benefits the aggressor – never his victim, whose pain is magnified when he or she feels forgotten.”

“The political prisoner in his cell, the hungry children, the homeless refugees – not to respond to their plight, not to relieve their solitude by offering them a spark of hope is to exile them from human memory. And in denying their humanity, we betray our own.”

“In a couple of minutes you will have the chance to prove that you are not an indifferent bystander,” Kyslytsya said. “All you  need to do is to press the ‘yes’ button, and to save the Human Rights Council, and many lives around the world and in Ukraine.”

“On the other hand, pressing ‘no’ means pulling the trigger. It means a red dot on the screen – red as the blood of the innocent lives lost,” he said.

“And this image of the red bloody dot on this screen will stay with you, and all of us, as long as memory does not fail us.”