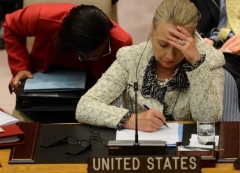 Secretary of State Hillary Clinton attends a U.N. Security Council meeting in 2012. Ambassador to the U.N. Susan Rice sits behind her. (Photo by Emmanuel Dunand/AFP/GettyImages)

(CNSNews.com) – Hillary Clinton claimed on Monday that the Obama-Biden administration, with her as secretary of state, had succeeded where its predecessor had not in securing international pressure on Iran over its nuclear program. But the historical record does not bear that out.

In an online conversation with the Atlantic Council, Clinton spoke of the need for “the incoming Biden-Harris administration” to rejoin the Iran nuclear agreement – which President Trump exited two years ago – and “to try to put that lid back on the Iranian nuclear-weapons program.”

“It was very important to try to get the world behind sanctions, because remember in the George W. Bush administration for eight years – and I was there as a senator – we voted to sanction Iran on every way we could.”

“But that was just the United States alone,” Clinton continued.

“And when President Obama went into office, when I became secretary of state, we saw it as essential to try to bring the world together. Not just unilateral sanctions by the United States, but the entire world.”

“And it was difficult, because, you know, a lot of countries had very big energy deals with Iran,” she said. “But we did it. We got everybody on the same page. We got the U.N. Security Council.”

“So this is doable, even though, yes, time has moved on and different relationships have developed,” Clinton said. “But you can’t tell how far you can go unless you take that first step. And I would certainly urge a new administration to, uh, tackle that as among its many important challenges, right off the bat.”

Clinton’s recall of recent history is not accurate, specifically her claim that sanctions against Iran under Bush were “just the United States alone,” while under Obama they involved “the entire world,” with “everybody on the same page.”

The resolutions passed, by 15 votes to 0, in December 2006, March 2007, and September 2008 (the third resolution did not impose new sanctions, but reaffirmed the sanctions contained in the previous two measures).

A fourth Iran sanctions resolution passed during the Bush administration in March 2008, with a single abstention, by Indonesia.

Democrats often criticized the Bush administration for its perceived unilateralism and supposed unpopularity at the United Nations. But Ambassadors John Bolton in 2006, Alejandro Wolff in 2007, and Zalmay Khalilzad in 2008 managed to persuade even some non-permanent UNSC members not necessarily supportive of U.S. interests to vote in favor of sanctions against Iran.

Diplomats prize unanimity in Security Council resolutions, which is seen as sending a “strong and unified” message in response to a crisis.

By contrast, notwithstanding Clinton’s claims, when the Obama administration sought unanimous support for an Iran sanctions resolution in June 2010, Ambassador Susan Rice had to settle for a 12-2 vote, with Turkey and Brazil voting “no,” and Lebanon abstaining.

To get veto-wielding permanent members Russia and China onboard for that June 2010 vote, moreover, the drafters had to water down the text, removing provisions targeting Iran’s energy sector.

Another UNSC resolution the following year extended the mandate of an expert panel monitoring the sanctions, without imposing new ones. The vote was 14-0, with Lebanon again abstaining.

Clinton is not alone in inaccurately assessing the relative successes of the Obama and Bush administrations in imposing Security Council sanctions against Iran.

In his 2012 State of the Union address, Obama took credit for the pressure faced by Tehran: “Through the power of our diplomacy, a world that was once divided about how to deal with Iran’s nuclear program now stands as one,” he said.

During the election campaign later that year, Biden claimed that when Obama took office, “there was virtually no international pressure on Iran” and the U.S. was isolated over the matter in the international community.

“We were diplomatically isolated in the world, in the region, in Europe,” he told an annual convention of the Rabbinical Assembly, an organization of Conservative rabbis. “The international pressure on Iran was stuck in neutral.”

“America’s leadership was in doubt. We were neither fully respected by our friends nor feared by our opponents,” Biden said of the Bush era. “Today it is starkly, starkly different.”