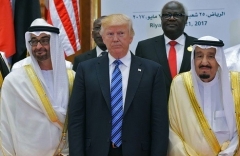 President Trump is flanked by Saudi King Salman and UAE Crown Prince Mohammed bin Zayed at a summit in Riyadh in 2017. (Photo by Mandel Ngan/AFP via Getty Images)

(CNSNews.com) – President Trump on Thursday portrayed himself as a Middle East peacemaker, pointing to breakthroughs between Israel and Arab states, looming U.S. troop drawdowns, and apparent signs of progress in Afghanistan.

Speaking to reporters at the White House, Trump repeated earlier assertions that other Arab states would follow the United Arab Emirates in normalizing relations with Israel – suggesting that they could include regional leader Saudi Arabia – and said the Palestinians may return to negotiations as they see Arab states warming to Israel.

And he predicted, not for the first time, that his re-election would bring even the Iranian regime to the table, given the severe economic difficulties it is facing as a result of restored U.S. sanctions.

Trump recalled that when he was running for the presidency, there was talk about how quickly he would drag the United States into a war.

(In one September 2016 debate, Democratic nominee Hillary Clinton asked Trump whether instead of negotiating a deal with the Iranian regime, he would have “started a war” or “bombed Iran.”)

Trump touched on various developments in the region:

--U.S. troop numbers in Iraq and Afghanistan are due to be substantially reduced – by 42 and 47 percent respectively – in the coming weeks.

--Saturday marks the opening of peace talks in Doha, Qatar, between the Taliban and an Afghan government team. The “intra-Afghan” talks are an element of separate agreements the U.S. concluded with the Taliban and the Kabul government last February, aimed at bringing America’s longest war to an end. Secretary of State Mike Pompeo is heading to Doha for the opening ceremony.

--Next Tuesday, Israel’s prime minister and the UAE foreign minister will join Trump at the White House for a ceremony to sign the first normalization agreement between Israel and an Arab state in 26 years.

Referring to the ceremony, Trump said “we could have another country added into that,” adding that other nations were “lining up.”

He did not elaborate, but Bahrain and Oman have been the Arab states most openly supportive of the Israel-UAE deal. (The ambassadors of Bahrain, Oman and the UAE were also all present at the unveiling of Trump’s Mideast peace vision last January.)

Saudi Arabia would arguably be the biggest prize, given its status in the Arab and Islamic worlds. Its reaction to the Israel-UAE deal has been more guarded than those of some of its Gulf partners, but its overflight approval is seen as significant.

“You could have peace in the Middle East,” he said. “I think what, ultimately, will happen is you’re going to have quite a few countries come in. The big ones are going to be coming in. I spoke to the king of Saudi Arabia, so we’re talking. We’re starting a — we just started the dialogue. And you’ll have them come in.”

“This is the best way,” he said of the broader effort to break down decades of enmity between Israel and the Arabs. “This is a way that’s going to be great. This can really bring the Middle East together.”

A Norwegian lawmaker has nominated Trump for the 2021 Nobel Peace Prize for his role in achieving the Israel-UAE agreement.

Trump predicted that as the process unfolds, the Palestinian Authority (P.A.) will return to negotiations as they see countries, including their traditional supporters and funders, pursuing normalization.

He recalled that he had cut U.S. funding to the Palestinians in 2018, “on the basis that they didn’t seem to want to make peace.”

“I’m frankly surprised they haven’t been to the table earlier.”

The P.A. broke off diplomatic contacts with the U.S. after Trump recognized Jerusalem as Israel’s capital in Dec. 2017 and announced plans to move the U.S. Embassy to the city the following May.

The P.A. opposes Arab states’ normalization with Israel absent a settlement of the Israeli-Palestinian conflict, but failed this week to get the bloc of Arab states to condemn the UAE decision.

A key factor in the warming of ties between Israel and Sunni Gulf states is a shared perception of Iran as a growing regional threat.

Trump said again on Thursday that he could see the regime in Tehran agreeing to engage very quickly, should he win a second term.

“If we win the election, Iran will come and sign a deal with us very, very rapidly, within the first, I would say, week, but let’s give ourselves a month, because their GDP went down 25 percent, which is, like, an unheard of number,” he said.

‘And they’d like to be able to get back to having a successful country again. So I think that’ll happen.”