On Eve of Audience With Biden, Pope Says Life of ‘Every Child Conceived … is Sacred and Inviolable’ 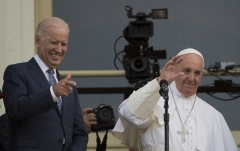 (CNSNews.com) – Shortly before meeting with a Catholic president who according to the White House “supports a woman’s right to choose” to abort her baby or carry it to term, Pope Francis publicly reaffirmed the church’s teaching that the life of “every child conceived … is sacred and inviolable.”

The pope told his weekly audience that he had earlier pronounced a blessing on church bells, commissioned by a Polish pro-life group and featuring pro-life words and images, that are to be delivered to parishes in Ukraine and Ecuador.

“Today I blessed the bells bearing the name ‘The voice of the unborn.’ They are destined for Ecuador and Ukraine,” he said.

“For these nations and for all countries, may they be a sign of commitment to the defense of human life from conception to natural death. May their sound proclaim to the world the Gospel of Life, awakening the people’s consciences and the memory of the unborn.”

“I entrust to your prayer every conceived child, whose life is sacred and inviolable,” the pontiff said. “I bless you with all my heart.”

Papal meetings with foreign dignitaries customarily include live coverage of the greeting and some introductory remarks and any exchange of gifts, before cameras leave for the actual audience and discussions.

The Associated Press reported that the Holy See announced it would provide edited footage after the meeting, but said spokesman Matteo Bruni had not explained why the Vatican had originally announced a measure of live coverage, before reversing a day before the visit.

“The White House told us the bilateral meeting would involve Biden and Francis discussing substantive matters of global significance ‘including ending the COVID-19 pandemic, tackling the climate crisis, and caring for the poor,’” Portnoy said in a WHCA statement. “Such an international news event demands independent coverage.”

He noted that reporters have been covering U.S. presidents’ papal audiences since President Woodrow Wilson met with Pope Benedict XV in 1919.

“Our fully vaccinated and masked pool of reporters is ready to continue this public service, mindful of its own safety as well as the leaders’, to ensure independent coverage of the first Catholic president in 60 years meeting with the head of the Catholic church.”

Reporters accompanying the president on Air Force One on Thursday afternoon asked National Security Advisor Jake Sullivan about the restrictions on press access.

“Broadly, as a matter of principle, the United States will always advocate for access for the free press – and especially for our good friends in the American press who travel with us on these long flights over, to be able to capture and chronicle the president’s engagements,” Sullivan replied.

“We’re actively engaged in that, and we’ll see what tomorrow brings.”

Sullivan said Biden and the pope would have “some private time,” before an expanded delegation meeting would “discuss a range of issues of mutual interest, from climate to an equitable global economic recovery.”

Asked whether Biden plans to talk about the abortion issue, Sullivan said that he was “referring to my colleagues who work on that set of issues in terms of anything to do with reproductive health. So, I don’t have anything for you on it.”

White House principal deputy press secretary Karine Jean-Pierre was asked whether the president was planning to “take communion with the pope.”

An article in La Stampa daily’s Vatican Insider said the Holy See was looking forward to the visit by the second Catholic president of the United States (the first was John F. Kennedy) who was seen as “an ally.”

It said the two were expected to discuss issues such as climate change, the fight against poverty and inequality, migration, and the COVID-19 pandemic.

“The papal audience comes for Biden at a time of division among U.S. Catholics on the issue of communion with politicians who support the right to abortion,” the article said. “The president is under pressure from the conservatives, but it is not certain that the pope will talk about it.”