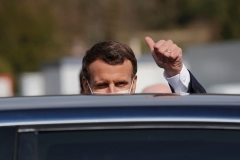 French President Emmanuel Macron raised eyebrows with his remarks about the unvaccinated. (Photo by Christophe Ena/Pool/AFP via Getty Images)

(CNSNews.com) – Italy’s government on Wednesday issued a decree making COVID-19 vaccination mandatory for everyone aged 50 and other, while French citizens pondered President Emmanuel Macron’s assertion – using coarse language – to the effect that he wanted to make life so unpleasant for the unvaccinated that they would submit.

After a unanimous vote by the Italian cabinet, Prime Minister Mario Draghi’s government did not announce what penalties would be applied in cases of non-compliance. Workers over 50 will have to show passes before entering workplaces, certifying them to be vaccinated or recently recovered from COVID-19.

Vaccine mandates will apply, regardless of age, to educators, health sector workers, and police and military personnel.

In France, Macron raised eyebrows when he said in a newspaper interview that his strategy was to “piss off” the unvaccinated by limiting their ability to take part in social activities and enjoy a normal social life.

He told Le Parisien that “we need to let [unvaccinated people] know: From January 15 you will no longer be able to go to a restaurant, you won’t be able to get a drink or a coffee or go to the theatre or the cinema ...”

With a presidential campaign underway, Macron’s rivals were quick to respond. Far-right presidential candidate Marine le Pen said Macron was “unworthy of his office” while on the far left, Jean-Luc Melenchon of the Rebellious France movement called the remarks “appalling.”

Center-right Republicans candidate Valerie Pecresse said it was not the place of the president to divide citizens into good and bad. She told the C News broadcaster that the country needs a government that “unites people and calms things down.”

The increasingly drastic measures and heated rhetoric come as European governments step up pressure on unvaccinated citizens amid a dramatic surge in cases attributed mostly to the coronavirus’ omicron variant.

Austria, which in November introduced a lockdown exclusively for unvaccinated people, plans to go even further than Italy next month, making vaccination mandatory for everyone over 14.

The Greek government, which late last year controversially began levying monthly fines on unvaccinated over-60s, is making the jab compulsory for everyone in that age group, with effect from mid-January.

Seventy-eight percent of Italians are fully vaccinated against the virus (according to the protocols first established by health authorities for “full” vaccination), as are 77 percent of French people, about 72 percent of Austrians, and 68 percent of Greeks.

Rates of booster uptake are 41.1 percent in Austria, 34.9 percent in Greece, 33.9 percent in France, and 33.8 percent in Italy. Medical experts argue that booster shots will lessen the chances of an infected person needing hospital ICU care.

Since the World Health Organization on November 26 identified a new “variant of concern” and labeled it omicron, COVID-19 case numbers in three of the above-mentioned four European countries have climbed sharply.

In Italy, a seven-day rolling average of 183 confirmed cases per million people on November 26 had risen to 1,918 by January 4, according to Johns Hopkins University’s coronavirus database.

Austria, however, saw movement in the opposite direction, with a seven-day rolling average of 1,482 confirmed cases per million on Nov. 26 dropping to 407 on Jan. 4.

Scientific knowledge and data accumulated to date indicate that while omicron is more contagious than previous variants of the coronavirus, its severity is markedly lower, with many infected people reporting mild or no symptoms.