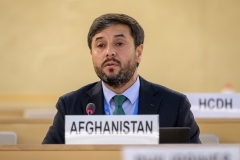 (CNSNews.com) – A United Nations committee on Wednesday deferred a decision on whether the terrorist group that seized power in Kabul over the summer should be allowed to represent Afghanistan at the world body.

The decision by the “credentials committee” leaves the seat for the meantime in the hands of the ambassador appointed by the elected government that was toppled by the Taliban last August.

The committee also deferred a decision on who should hold the seat of Burma, which also underwent an unconstitutional change of government when the a military junta took over last February.

“We can confirm that the credentials committee has had its meeting to consider the credentials of U.N. member-states, including Afghanistan and Myanmar [Burma],” Swedish ambassador Anna Karin Eneström told reporters after the closed meeting.

“The committee has decided to defer its decision of the credentials in these two situations. The report of the committee will be made public once it has been issued, for the consideration by the General Assembly.”

Eneström declined to answer further questions, including one on how long the deferral will last. She did say that the committee has not yet scheduled a next meeting.

Sweden chairs the nine-member committee, whose other members this year are the United States, China, Russia, Bahamas, Bhutan, Chile, Namibia, and Sierra Leone.

Muttaqi said that Ghulam Isaczai, the ambassador appointed by Ghani earlier this year, should no longer represent Afghanistan at the U.N.

There was no immediate reaction to the credential committee’s deferral decision from Isaczai, but his counterpart at the U.N. in Geneva, Ambassador Nasir Ahmad Andisha, called the decision a “principled” one.

Andisha said the Taliban has reneged on all the undertakings it made since entering negotiations with the U.S. in 2019.

He listed among the most serious breaches the group’s violent takeover of cities including Kabul, “retaining links and working relations with known terrorist groups,” the return of the “brutal” Islamic Emirate, and the establishment of an exclusively Taliban, all-male, and essentially Pashtun theocratic government.

“On human rights, women participation, rights of other ethnic and religious groups, the picture is even bleaker,” Andisha said. He argued that the attempt to make the Taliban a responsible state entity was “a futile exercise on part of some states.”

He said the Taliban could “at best” form part of a state, but not run one – not in the third decade of the 21st century.

“Hopefully this decision, once approved by the GA, sends a clear message to them that with power, even attained by illegitimate means, comes certain national and international responsibilities.” 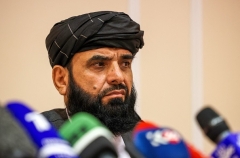 The Taliban has named Suhail Shaheen as its representative to the United Nations. (Photo by Dimitar Dilkoff/AFP via Getty Images)

The Taliban did not immediately respond to the committee’s decision. Earlier in the day Suhail Shaheen, a Taliban spokesmen named as its nominee for ambassador to the U.N. – alluded to the issue.

“To have an Independent Afghanistan is the legitimate right of the people of Afghanistan. For this they struggled for decades,” Shaheen tweeted. “Why they should be target of sanctions, pressures and deprived of seat at UN because they wanted an Afghanistan, free of occupation and able to have positive relations with any country of the world based on mutual interests[?]”

More than a dozen members of the Taliban’s “interim” cabinet – including the prime minister, his two deputies, and Muttaqi, the foreign minister – are U.N. Security Council-sanctioned terrorists, subject to a travel ban and assets freeze.

CNSNews.com reported earlier that if the Taliban is handed the Afghanistan seat at the U.N., the regime will also assume leadership positions in several other agencies, including the executive board of the U.N.’s cultural agency UNESCO, and the Commission on Status of Women (CSW), the U.N.’s gender equality and women’s empowerment body.

Last September, Senate Foreign Relations Committee ranking member Sen. Jim Risch (R-Idaho) introduced legislation calling on the U.S. ambassador to the U.N. to use the “voice, vote, and influence of the United States” to object to the issuing of U.N. credentials to any member of the Taliban, and “to ensure that no member of the Taliban may serve in a leadership position in any United Nations body, fund, program, or specialized agency.”

Before Wednesday’s credentials committee meeting, Risch in a tweet cautioned it not to credential anyone from the Taliban, “a proven terrorist org[anization]. Giving legitimacy to a group undermining peace & human rights is counter to our values & nat’l security.”

After the Taliban seized control of most of Afghanistan the first time, in 1996, it also sought the country’s U.N. seat, but the credentials committee repeatedly deferred a decision on the matter.

As a result, the seat continued to be held by the representative of the previous government, even though it claimed to control only about one-quarter of the country.

That situation persisted right through the Taliban era, and after U.S.-led forces toppled in in late 2001.

No country has yet formally recognized the 2021 regime.