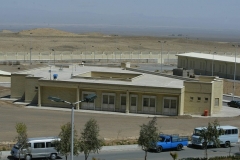 (CNSNews.com) – Days after Israel stepped up its warnings about Iran’s nuclear program – amid the Biden administration’s attempts to revive the nuclear deal – the regime in Tehran on Sunday called a blackout at a key nuclear facility an act of “terrorism” and “sabotage.”

Israel has not commented, but Israeli media outlets cited intelligence sources as saying the Natanz facility had been targeted in a cyber attack designed to slow down nuclear advances.

The Atomic Energy Organization of Iran (AEOI) said the incident damaged the electricity distribution grid at Natanz, but without giving details.

State television quoted AEOI chief Ali-Akbar Salehi as saying Iran reserves the rights to act against the perpetrators, and called on the international community to “deal with this nuclear terrorism.”

Relations between Iran and Israel, always frosty, have become even chillier recently as a result of a series of apparently tit-for-tat blasts targeting each other’s ships at sea.

The weekend incident came just after Iran’s “National Day of Nuclear Technology,” when the regime typically makes nuclear-related announcements. President Hassan Rouhani on Saturday inaugurated new centrifuges as the facility, in a further violation of the Joint Comprehensive Plan of Action (JCPOA) nuclear deal – which set limits of the amount of uranium Iran could enrich, the levels of purity, and the number and type of centrifuges allowed.

The plant at Natanz is central to a nuclear program which the regime insists is peaceful, but the U.S. and others suspect is a cover for developing a weapons capability. Those concerns led to the negotiated JCPOA, which set curbs on nuclear activities in return for sanctions relief.

Natanz has been subjected to sabotage in the past, including a mysterious explosion last July, and a damaging computer virus infection in 2010, which Iran blames on the U.S. and Israel.

The latest incident came during a break in talks in Vienna, at which the Biden administration and the Iranian regime are negotiating – indirectly, through other JCPOA partners – over the steps needed for each side to return to JCPOA compliance.

After President Trump withdrew from the deal in 2018 and restored sanctions, Iran began breaching its obligations. Iran insists the Biden administration lift all sanctions before it returns to compliance; the U.S. refuses to go first, but its negotiators are looking for a way through the impasse. The talks are due to resume on Wednesday.

The Grand Hotel in Vienna, Austria, venue for talks involving the U.S. and other countries, in a bid to revive the 2015 Iran nuclear deal. (Photo by Joe Klamar/AFP via Getty Images)

Supporters and critics of the nuclear deal assessed the likely motivation behind and consequences of the blackout.

Richard Goldberg, a senior advisor at the Foundation for Defense of Democracies (FDD), called the incident a “timely reminder” from Israel that the Obama-Biden argument that the only options for dealing with Iran’s nuclear program were the JCPOA or war, was “a false choice.”

Alon Ben David, a defense analyst with Israel’s Channel 13 network, argued that without the ability to enrich uranium in Natanz in the months ahead, Iran would lose leverage in the JCPOA talks.

FDD senior vice president for research Jonathan Schanzer said that, “with Iran on its back foot, US has been gifted real leverage.”

Trita Parsi, founder and former president of the National Iranian American Council and a leading advocate of the nuclear deal, predicted that the next Iranian president would feel compelled to strike back against “Israel’s aggression.” Elections are scheduled for June .

That retaliation by Iran, Parsi said, would “either spark a larger conflict or at a minimum further undermine prospects for talks, blocking the outcome Israel fears the most: A US-Iran deal that reduces their tensions and paves the way for the US to shift its focus away from the MidEast.”

Prime Minister Binyamin Netanyahu has made no secret that Israel worries about a U.S. return to the accord.

“The nuclear agreement with Iran, which allowed it to make progress in developing its arsenal of atomic bombs under international auspices – this very same agreement is back on the table,” he said during a Holocaust Memorial Day ceremony last week.

“However, history has taught us that such agreements with such extremist regimes are worth less than nothing,” Netanyahu said. “Even to our best friends I say: Make no mistake; an agreement with Iran that will pave their way to a nuclear weapon – a weapon that threatens to destroy us – any such agreement will not bind us one iota. Only one thing binds us: preventing those who seek to destroy us from carrying out their plan.”

The two didn’t answer questions, but in remarks to media Gantz said he had “emphasized to Secretary Austin that Israel views the United States as the full partner across all operational threats, not the least, Iran.”

“The Tehran of today possess a strategic threat to international security to the entire Middle East and to the state of Israel,” he said. “And [we] will work closely with our American allies to ensure that any new agreement with Iran will secure the vital interest of the world, of the United States, prevent dangers, unrest in our region and protect the state of Israel.”

Austin said he had reaffirmed during the meeting that “our commitment to Israel is enduring and it is iron clad.” Topics for discussion had included “regional security challenges,” he said. He did not mention Iran.