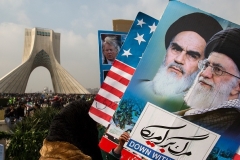 (CNSNews.com) – The Iranian regime is behind spoof emails sent to Americans, “designed to intimidate voters, incite social unrest, and damage President Trump,” Director of National Intelligence John Ratcliffe said Wednesday night. He added an assurance that despite claims to the contrary in the emails, “your votes are secure.”

Ratcliffe was speaking alongside FBI Director Christopher Wray at a hastily-arranged press conference, following reports of people in Florida receiving emails demanding that they vote for Trump – “or we will come after you.”

“We have confirmed that some voter registration information has been obtained by Iran, and separately by Russia,” Ratcliffe said. “This data can be used by foreign actors to attempt to communicate false information to registered voters that they hope will cause confusion, sow chaos and undermine your confidence in American democracy.”

“These actions are desperate attempts by desperate adversaries,” he said.

“Even if the adversaries pursue further attempts to intimidate or attempt to undermine voter confidence, know that our election systems are resilient. And you can be confident, your votes are secure.”

Ratcliffe said the intelligence community was also aware that Russian actors “have obtained some voter information, just as they did in 2016.”

“Rest assured that we are prepared for the possibility of actions by those hostile to democracy.”

He said the information was being made public “to give you the confidence that we are on top of this, and providing you with the most powerful weapon we have to combat these efforts: The truth. Information.”

Americans should do their part by not allowing the efforts to have their intended effect – by not being alarmed at receiving such material, and not spreading it, Ratcliffe said.

And he added that the issue was not a partisan one: He had spoken on Wednesday to lawmakers from both parties, “and there is complete unanimity in the U.S. government in our resolve to combat the enemies of freedom.”

The emails in question claim that the recipient is known to be a registered Democrat – “because we have gained access to the entire voting infrastructure” – and that the senders will know which candidate they vote for.

“You will vote for President Trump on Election Day or we will come after you,” the email message says. “Change your party affiliation to Republican to let us know you received our message and will comply.”

University of Florida publication The Alligator reported that the Information Technology department had removed the email from 183 account inboxes.

Evidently designed to tarnish Trump, the emails purport to come from the Proud Boys, a right-wing group which Trump’s foes have tried to link to the president.  Proud Boys leaders deny having anything to do with them.

(Joe Biden and others call the Proud Boys white supremacists, although the group includes black and Hispanic members. It claims – on its now shutdown website – to be made up of “Western chauvinists.”)

Wray told the press conference that the FBI was “not going to tolerate foreign interference in our elections or any criminal activity that threatens the sanctity of your vote or undermines public confidence in the outcome of the election.”

“When we see indications of foreign interference or federal election crimes, we’re going to aggressively investigate and work with our partners, to quickly take appropriate action,” he said.

Before the press conference, Senate Select Committee on Intelligence acting chairman Marco Rubio (R-Fla.) and the Democratic vice chairman Mark Warner (Va.) jointly urged Americans, including members of the media, “to be cautious about believing or spreading unverified, sensational claims related to votes and voting.”

“Our adversaries abroad seek to sow chaos and undermine voters’ belief in our democratic institutions, including the election systems and infrastructure that we rely on to record and properly report expressions of the voters’ will,” they warned.

Chris Krebs, the director of the Department of Homeland Security’s Cybersecurity and Infrastructure Security Agency (CISA), tweeted that two weeks from Election Day was “the perfect time for adversaries to create chaos by spreading bogus claims or overstating activity.”

The “threatening emails with misleading info about the secrecy of your vote” were intended “to intimidate and undermine American voters’ confidence in our elections,” Krebs said. “FACT: Ballot secrecy is guaranteed by law in all states.”

CISA has launched a site that identifies and responds to rumors relating to the election.

There was no immediate reaction to the allegations from the Iranian regime or state media. Earlier on Wednesday, President Hassan Rouhani told a cabinet meeting it didn’t matter whether Trump or Biden wins the election “because any U.S. government that takes office has no choice but to surrender to the Iranian nation.”

Trump has predicted that should he win a second term, the sanctions-hit regime will be anxious to make a deal with the U.S. at the earliest possible time.