Defense Secretary: US Military Not Currently Able to Go Beyond Kabul Airport to Rescue People 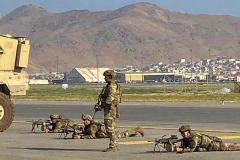 US soldiers at Kabul airport this week. (Photo by Shakib Rahmami/AFP via Getty Images)

(CNSNews.com) – The U.S. military does not currently have the capability of extending its presence beyond the perimeters of the Kabul international airport, Defense Secretary Gen. Lloyd Austin said Wednesday when asked about people wanting to leave, being prevented from reaching the facility.

Asked at a briefing about people who “can’t get into the airfield,” Austin said, “We’re going to do everything we can to continue to try to deconflict [coordinate with the Taliban] and create passageways for them to get to the airfield.”

“I don’t have the capability to go out and extend operations currently into Kabul,” he said. “And where do you take that? I mean, how far can you extend into Kabul, you know, and how long does it take to flow those forces in to be able to do that?”

There are now some 4,500 U.S. military personnel on the ground at the Hamid Karzai International Airport (HKIA), with the focus on securing the airport and facilitating the safe departure of Americans, other nationals’ civilians, and at-risk Afghans.

The personnel include two U.S. Marine battalions, a battalion of soldiers from the Minnesota National Guard, an 82nd Airborne Division brigade, a U.S. Army 10th Mountain Division infantry battalion, and some special operations forces, according to chairman of the Joint Chiefs of Staff Gen. Mark Milley.

Asked about the possibility of deploying troops to extract Americans wanting to get to the airport but stuck behind Taliban lines, Milley said the U.S. military had the capabilities but that taking such action would be “a policy decision.”

Austin then added, “I would draw a distinction between extracting someone in extremis condition or circumstance versus going out and collecting up large numbers of American citizens.” 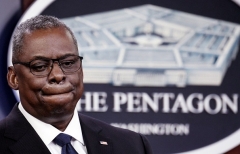 “We don't have the capability to go out and collect up large numbers of people.”

Over the past 24 hours, around 2,000 passengers, including 325 American citizens, had been flown out of the country in 18 Air Force C-17 Globemaster III aircraft, Pentagon Press Secretary John Kirby told a separate briefing.

He said the goal was to ramp up to having the capacity to evacuate 5,000-9,000 people a day, although the actual numbers each day would depend on many factors, including “the ability to process people through the gate and to do it safely.”

But with armed Taliban fighters patrolling and manning checkpoints, the difficulties some are experiencing in trying to reach the airport continues to be a concern.

“We have seen reports that the Taliban, contrary to their public statements and their commitments to our government, are blocking Afghans who wish to leave the country from reaching the airport,” Deputy Secretary Wendy Sherman said at the State Department.

“Our team in Doha and our military partners on the ground in Kabul are engaging directly with the Taliban to make clear that we expect them to allow all American citizens, all third-country nationals, and all Afghans who wish to leave to do so safely and without harassment,” she said.

Sherman was asked about an alert sent out by the U.S. Embassy in Kabul – currently operating from the airport – to the effect that the U.S. government “cannot ensure safe passage” to the airport for Americans wanting to leave the country.

“I’m wondering what this says about the competency of this mission and also the U.S. confidence in the Taliban’s commitment to provide a safe passage to the airport that you’re telling these Americans, ‘You can go to the airport if you want, but you’re not necessarily going to get there safely,’” a reporter asked.

Sherman said Kabul was an “enormous city,” and “I don’t know of any government that would be capable of reaching out to where everybody might be.”

To her knowledge, no American wanting to get to the airport had been harassed by the Taliban or prevented from getting there, she said, while conceding that such incidents may have occurred.

“So far the track record is quite good for Americans getting to HKIA, and it appears that the Taliban’s commitment for safe passage for American citizens has been solid,” Sherman said.

“Again, I don’t know every case, so I’m not making a bottom-line assessment here. But, so far the experience seems to be one that has worked.”

About 11,000 people who “self-identify as American citizens” remain in the country, White House press secretary Jen Psaki said on Tuesday.

President Biden told ABC News’ George Stephanopoulos that he aimed to get Americans out by the end of August – his earlier deadline for the U.S. troop withdrawal to be complete – but added, “if there’s American citizens left, we’re gonna stay to get them all out.”

State Department spokesman Ned Price also suggested that the timeline may be blurring.

“We are in the first instance always going to prioritize the safety and security of our diplomats on the ground, of the service members who are providing force protection, who are facilitating many of these operations, Price said.

“But we know that with every passing day, we will be in a position to bring to safety, whether through repatriation or transfer to a third country, potentially thousands of additional Afghans.”

“So, we know that time is of the essence. We will do everything we can in the first instance to make the most of the time we have, but to potentially even explore if there is more time that we may have.”