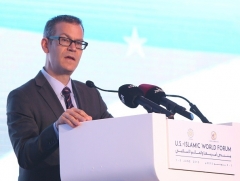 Colin Kahl delivers a speech to the 2015 U.S.-Islamic World Forum, an annual event sponsored by the Brookings Institution and Qatar’s foreign ministry. At the time he was national security advisor to then-Vice President Biden. (Photo by AFP via Getty Images)

(CNSNews.com) – The U.S. Senate on Tuesday voted along party lines to confirm President Joe Biden’s pick for the third most-senior post in the Pentagon, after heated criticism over the nominee’s positions and statements, including on Israel and Iran.

Before the 49-45 vote to confirm Colin Kahl as undersecretary of defense for policy, Sen. Ted Cruz (R-Texas) challenged Democrats who describe themselves as pro-Israel to oppose the nomination of a man who, he charged, had spread anti-Israel conspiracy theories online and “spent years fighting against” efforts to move the U.S. Embassy in Israel to Jerusalem.

“I’ve come to believe that Colin Kahl’s judgment is irreparably marred by obsessive animosity towards Israel,” Cruz said of the nominee, whose past posts included that of national security advisor to then-Vice President Biden during the Obama administration.

“I can think of no other way to explain his years of consistent wrong views regarding the Middle East – and not just wrong, but impulsive and reckless.”

Among examples offered by Cruz was Kahl’s reaction to Israel’s surreptitious seizure in 2018 of archived Iranian nuclear program documents and CDs from a warehouse in Tehran.

Cruz argued that the capture of the archive showed that the Iran nuclear deal, “of which Kahl was a principal architect, had been flawed from the start.”

However, he said, “Kahl responded to the news of the raid by suggesting on Twitter the archive was fabricated by Israel with the aim at dragging American boys and girls into another Middle East war.”

(Then-Secretary of State Mike Pompeo affirmed at the time that the documents were “authentic,” that they contained information not known previously, and proved that the Iranians had lied to the international community.)

Cruz said Kahl has also worked to oppose efforts to move the U.S. Embassy to Jerusalem.

“According to reports from 2012, Kahl was personally responsible for trying to remove language from the Democratic Party platform embracing Jerusalem as the capital of Israel,” he said. (The New York Times reported at the time that President Obama himself stepped in to resolve the platform row, reinserting the Jerusalem language.)

“And when President Trump recognized Jerusalem,” Cruz continued, “Kahl predicted it would isolate the United States and Israel and even potentially trigger a third intifada. He was wrong.”

Cruz quoted Kahl as saying the push by Congress to have Iran’s Islamic Revolutionary Guard Corps (IRGC) designated as a foreign terrorist organization – a step Trump took in April 2019 – was “playing politics so we can show we were tough on Iran. And again he predicted a disaster; again, he was wrong.”

Cruz said Kahl would become, in his view, “the most virulently anti-Israel nominee who would serve in the entire Biden administration.”

“Many of our friends on the Democratic aisle like to say they support the nation of Israel,” he concluded. “Well, this is a chance to demonstrate you mean it. Because you cannot vote to confirm a rabid anti-Israel conspiracy theory-tweeting radical to the number three position in the Department of Defense, and then claim you’re a reliable friend of Israel.”

After Cruz ended his statement, the Senate voted to confirm Kahl. Every Democrat who cast a vote supported the nomination and every voting Republican opposed it. (Six Republicans and one Democrat did not vote.)

On the 2012 Democratic Party platform issue, he said that the language he was involved in writing “simply represented the U.S. official policy at the time, which was the same policy in the Bush administration, which was not to formally recognize Jerusalem [as Israel’s capital] because it was a final status issue.”

At the hearing, Kahl also apologized to Republican senators for what he described as “sometimes disrespectful” language in past tweets critical of Trump administration policy decisions.

Tweets raised during the hearing included one in 2019, relating to Trump’s abrupt decision to withdraw troops from Syria, in which Kahl said Republicans had “debase[d] themselves at the alter [sic] of Trump,” and had become “the party of ethnic cleansing.”

In another, in 2018, Kahl tweeted that if John Bolton was named Trump’s national security advisor, “we are going to die.”

Sen. Tom Cotton (R-Ark.), one of the committee members who raised the matter, said the problem wasn’t “mean” or “insulting” tweets.

“We are all used to harsh criticism up here,” he said. “This is just a small – a very small – sample of the many intemperate and unbalanced remarks that you’ve directed at people who disagree with you about public policy.”

In his apology, Kahl said that “the last few years have been pretty polarizing on social media. I’m sure there are times that I got swept up in that.”

“There were a number of positions that President Trump took that I strongly opposed,” he told the panel. “I think the language that I used in opposing those was sometimes disrespectful, and for that I apologize.”

“Absolutely,” she said. “Colin is qualified. He’s experienced. And he would bring an incredible reservoir of perspective to the job at the Department of Defense. So we look forward to his confirmation.”

“So no consideration whatsoever of withdrawing his nomination?” a reporter asked.