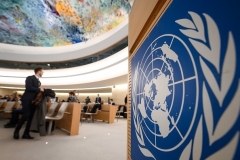 The logo of the United Nations is visible in the Human Rights Council chamber in Geneva. (Photo by Fabrice Coffrini/AFP via Getty Images)

(CNSNews.com) – Only countries ranked “free” for upholding political rights and civil liberties should be allowed to compete for seats on the U.N. Human Rights Council, and secret ballot elections for the Geneva-based body should end, critics argue in a new report.

Fifteen years after its inaugural session, the HRC’s obvious flaws continue to frustrate efforts to promote and protect human rights globally. Foundation for Defense of Democracies (FDD) scholars argue that U.S. participation should be made conditional on radical changes both to how it operates, and who occupies its seats.

Since its establishment in 2006, the HRC has had in its ranks some of the world’s most egregious rights-abusing regimes, including China, Cuba, Saudi Arabia, Russia, Pakistan and Venezuela’s Maduro regime.

When its founding charter was being negotiated in 2005-2006, the George W. Bush administration pushed for membership to be denied to any country facing U.N. sanctions for rights abuses or terrorism, and for all candidates to require a two-thirds majority vote of the General Assembly (UNGA) to win seats.

But those efforts to set standards for membership were unsuccessful, as were later attempts by the Obama and Trump administration to reform the HRC – a situation that prompted the latter to withdraw in 2018.

Reversing that stance, the Biden administration has renewed participation, and intends to run for a seat in elections in the fall. Like its predecessors, it has pledged to work to improve the HRC.

But critics say the problems are inbuilt: Any U.N. member state can run for one of the 47 seats, only a simple majority vote in the UNGA is required, and voting is by secret ballot, so governments never have to reveal or defend their voting choices.

Adding to the problem, seats are earmarked for regional groups, and those regional groups frequently put forward “closed slates” of candidates, who are ushered uncontested onto the council in an exercise that falls far short of an “election.”

In their report, FDD research fellow Tzvi Kahn, research analyst David May and adjunct fellow Craig Singleton argued that only countries ranked “free” by Freedom House should be allowed to run for HRC seats.

“Countries ranked ‘partly free’ or ‘not free’ should be ineligible for membership,” they wrote.

The also recommended that ballots for HRC elections should be open, not by secret ballot.

“Forcing UNGA members to publicize their votes could dissuade them from casting votes for abusers, thereby introducing accountability in the U.N. human rights infrastructure.”

Kahn, May and Singleton said the Biden administration and Congress should condition U.S. support for the HRC on those, and other recommended changes.

Freedom House, a Washington-based democracy watchdog, has been grading countries since 1973, with scores for political rights and civil liberties resulting in a “free,” “partly free” or “not free” designation.

Another 16 members this year are “partly free,” a group including Pakistan, which enforces the world’s most heinous blasphemy laws, and Mauritania, an Islamic state where modern-day slavery of black Africans has been prevalent.

Moreover, some of the worst abusers have been fixtures on the HRC for most of its existence. China, Cuba, Pakistan, and Saudi Arabia, have each been elected (for three-year terms) four times, and Russia three times.

Although the council’s founding charter did request governments to take into account candidates’ human rights records when considering their vote, that has made no evident difference.

They and others regularly tout their election as evidence of global support for their policies.

Repressive regimes on the council frequently join forces to protect each other, and to counter initiatives brought by liberal democracies.

The HRC has as a result never passed a resolution condemning rights abuses in China, Cuba, Egypt, Pakistan, Russia, or Saudi Arabia, while Israel has been the number one target.

“The UNHRC has passed roughly an equal number of resolutions condemning Israel as it has for the rest of the world combined,” the FDD scholars noted.

In a June report, U.N. Watch, a Geneva-based NGO that closely monitors the HRC, found that based on votes in 2020 nearly half of the countries on the council “are using their membership negatively, opposing instead of supporting action for victims of arbitrary detention, torture and other abuses.”

U.N. Watch Executive Director Hillel Neuer argued in a recent op-ed that it would be better to have all 193 U.N. member-states represented on the HRC than continue with the current no-criteria membership and “legitimizing facade of elections.”

Having every U.N. member-state sit on the council would “dilute” the influence of dictators, he wrote.

“The malign council isn’t going away, and the Biden administration is determined to have the U.S. play a role in it. Here’s a way to make it a constructive one.”