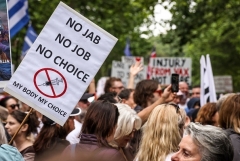 A protest against COVID-19 vaccine mandates and lockdowns in Sydney, Australia last month. (Photo by David Gray/AFP via Getty Images)

(CNSNews.com) – As the issue of vaccine mandates roils politics in the United States, health fears compounded by the latest variant of the coronavirus are prompting some governments in Europe and elsewhere to go beyond employment-related mandates and introduce controversial restrictions on the right of the unvaccinated to engage in numerous aspects of public life.

In Germany, federal and state leaders approved measures that will restrict access to restaurants, cultural venues including theaters and museums, and non-essential businesses to those who have been vaccinated or who have recovered from COVID-19 in the previous six months.

The same entry requirements apply to sports events, including fixtures in the hugely popular national professional soccer league, whose 2021-2022 season runs from August to next May. Games in the Bundesliga will be limited to 15,000 supporters – in a league whose average game attendance in 2018-2019 was more than 43,000.

The measures approved by the German authorities also restrict private gatherings of unvaccinated people to members of their own household plus two additional people.

Olaf Scholtz, who will succeed Angela Merkel as chancellor next week, said that if Germany’s vaccination rates were higher, “we wouldn’t be discussing this now.” Sixty-eight percent of Germans are fully vaccinated, compared to 59.6 percent in the United States.

For her part, Merkel described the controversial restrictions as acts of “national solidarity.”

Merkel also suggested that compulsory vaccination be considered, although she acknowledged that legislators would have to approve the move.

Mandatory vaccination for all – as opposed to increasingly common policies applicable to certain sectors such as health and education – is a drastic step that only a small handful of countries have taken so far.

Indonesia was believed to be first to do so earlier this year, imposing of fines of up to five million rupiah (about $347) for non-compliance. In Turkmenistan, all residents aged 18 and over are compelled to be vaccinated, with only those who are unable to be jabbed without risking medical complications exempt.

The government of Austria has announced that COVID-19 vaccinations will be mandatory for all as of February 1.

Amid a sharp rise in COVID-19 cases since mid-October, Austrian authorities last month introduced a lockdown exclusively for unvaccinated people.

Austrians who are not vaccinated are now only allowed to leave home to shop for food, work, or exercise. Those types of restrictions were familiar around the world for limited periods of time during earlier stages of the pandemic, except in those cases they generally did not discriminate.

As in Germany, unvaccinated Austrians are not allowed to go to restaurants or bars. Lockdown violators face the risk of fines of 500 euros ($565).

Critics question the constitutionality of the measures, which sparked large street protests as they came into effect. But the Austrian government said it had little choice in a country where only around 65 percent of eligible people are fully vaccinated.

(Austria’s vaccination rate is by no means the lowest in the European Union, where rates range from just 25 percent in Bulgaria and 38 percent in Romania to a high of 87 percent in Portugal.)

Greece (63 percent full vaccinated) recently began imposing fines – 100 euros ($113) a month – on anyone aged 60 or older who hasn’t been vaccinated.

The right-wing Greek newspaper, Demokratia (“Democracy”) accused Prime Minister Kyriakos Mitsotakis of essentially telling pensioners that he is “punishing them for their own good.”

European Commission president Ursula von der Leyen told reporters in Brussels on Wednesday that the E.U. needs to have a “discussion” about mandatory vaccination to counter the spread of the “omicron” variant of the virus, raising fears in some circles that the Austrian decision may begin a domino effect across the bloc.

The bloc’s 27 health ministers are expected to assess the pandemic situation including the emergence of the omicron variant next week, before E.U. leaders discuss it at a scheduled summit on December 16.

Meanwhile in New Zealand, life for the unvaccinated from Friday also became more limited in parts of the country, including the biggest population center. Anyone unable to show proof of full vaccination is unable to enter restaurants, bars, libraries, gyms, sports and recreation venues, etc.

Any hospitality venue wanting to operate without requiring “vaccine passes” will be restricted to takeout pick-up or delivery. Anti-vaccine mandate protests have been held in a number of centers.

Mandatory full vaccination for employees in the health sector, including pharmacists, nurses, and paramedics, came into effect on Wednesday, while teachers and school support staff must be fully vaccinated by January 1, or lose their jobs.

Eighty-seven percent of eligible New Zealanders – those aged 12-plus – are fully vaccinated.