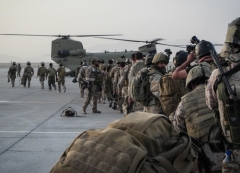 (CNSNews.com) – The U.S. military will in the coming weeks almost halve the number of troops deployed in Iraq and Afghanistan, the top U.S. commander in the region, Marine Gen. Kenneth McKenzie, confirmed on Wednesday.

During the month of September, the commander of U.S. Central Command said during a visit to Iraq, troops numbers in Iraq will be reduced from about 5,200 to 3,000 – a reduction of around 42.3 percent.

Later on Wednesday, McKenzie told the Voice of America that the number of troops in Afghanistan would drop from the current 8,600 to around 4,500, by early November. That constitutes a reduction of some 47.6 percent.

“Great news. Let’s bring our heroes home!” tweeted Sen. Rand Paul (R-Ky.), while Rep. Andy Biggs (R-Ariz.) said he was proud of President Trump “for continuing to keep his promises to get America out of endless wars and to bring our troops home.”

“It’s past time to bring our troops home from Iraq and Afghanistan,” said Rep. Thomas Massie (R-Ky.). “President Trump is winding down the ‘forever wars’ he inherited from D.C.'s political classes.”

Sen. Lindsey Graham (R-S.C.), a hawkish ally of the president but one who has differed with him on foreign policy on occasion, offered cautious support, saying he backed the drawdown decision “due to conditions on the ground.”

“The physical ISIS Caliphate has been destroyed and the Iraqi security forces are becoming more capable. However, there remains a large number of ISIS-aligned fighters in Iraq and Syria who have the capability to reemerge en masse,” he said.

“The residual US force, combined with Iraqi security forces and other partner nations, should be sufficient to prevent reemergence of ISIS and provide continued stability for Iraq – both of which are in our national security interests.”

Bradley Bowman, a defense expert with the Foundation for Defense of Democracies in Washington, said that by his count, the U.S. is on track to have a combined total of roughly 8,200 in Iraq, Afghanistan, and Syria by November.

“And what are those 8,200 troops doing?” Bowman asked. “By advising and assisting partner forces, while conducting [counter-terror] operations as necessary, they are preventing a return of the ISIS caliphate, preventing another 9/11 attack on the United States, & helping to push back against Tehran.”

Speaking in Iraq on Wednesday, McKenzie said the decision to cut troop numbers from 5,200 to 3,000 was made “in recognition of the great progress the Iraqi forces have made, and in consultation and coordination with the government of Iraq and our coalition partners.”

“This reduced footprint allows us to continue advising and assisting our Iraqi partners in rooting out the final remnants of ISIS in Iraq and ensuring its enduring defeat,” McKenzie said. “This decision is due to our confidence in the Iraqi Security Forces’ increased ability to operate independently.”

Following the Iraq war, U.S. forces were withdrawn at the end of 2011, but began to return in 2014 after ISIS seized large swathes of territory. Since the ISIS insurgency was largely defeated in March last year, the 5,200 troops in Iraq today are mostly involved in training Iraqi soldiers and police.

Their continuing presence has drawn strong opposition from some quarters, particularly after last January’s U.S. drone strike that killed of Iranian Qods Force commander Qassem Soleimani in Baghdad. The Iraqi parliament that month voted to recommend that the government ask all foreign forces to leave the country.

Over the following months, several rocket attacks by suspected Iran-backed Shi’ite militia targeted U.S. troops. In one such attack in March, two American troops and a British soldier were killed at Camp Taji, north of Baghdad.

The U.S.-led international coalition handed over a number of bases to the Iraqis this year, including Camp Taji last month.

McKenzie said the drawdown decision was “a clear demonstration of our continued commitment to the ultimate goal, which is an Iraqi Security Force that is capable of preventing an ISIS resurgence and of securing Iraq’s sovereignty without external assistance.”

“The journey has been difficult, the sacrifice has been great, but the progress has been significant,” he said. “Your mission is important and there is still much work to be done- so let’s get back to it.”

In his comments to VOA about Afghanistan, McKenzie said a reduced number of 4,500 troops there would be sufficient “to accomplish the core task that we want to accomplish.”

“We’ve shown more than ample goodwill in our willingness to demonstrate that we don’t want to be an occupying force in this country, but we do have strategic interests, vital interests, that compel us to be certain that these entities such as al-Qaeda and ISIS can’t be guests there to attack the United States.”

In an agreement concluded with the Taliban last February, the U.S. undertook to reduce the number of troops from around 12,000-13,000 to 8,600 by July, and then to zero by April 2021, on condition that the Taliban meets a number of commitments.

They include releasing prisoners, entering into “intra-Afghan” negotiations with the government, and most importantly, severing the links with al-Qaeda that precipitated the U.S. invasion in October 2001, after the terrorist group attacked America.

The 8,600 target was met in July, and Wednesday’s announcement puts the next stage of the drawdown well on track.