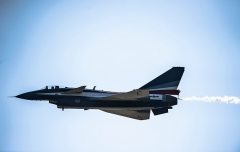 (CNSNews.com) – Chinese warplanes encroached on areas close to Taiwan’s airspace on eight separate occasions on Monday, as the Taiwanese foreign minister warned that Beijing may take advantage of the U.S. election to ramp up pressure on the island nation which it regards as a rebel province.

A country’s ADIZ lies outside its sovereign airspace, but government authorities usually expect aircraft entering the zone to report their presence and flight plans.

Around the time that China began to step up its ADIZ incursions, Hudson Institute senior fellow Seth Cropsey in an analysis drew attention to the types of PLAAF aircraft involved.

“The Su-30 is one of China’s front-line combat aircraft, comparable to the U.S. F-15 and capable of defeating Taiwan’s most advanced F-16s in an aerial dogfight,” he wrote. “The Y-8, a Chinese version of the Soviet An-12 heavy-lift transport, can be used to deploy paratroopers or as a maritime surveillance, electronic warfare, and drone deployment aircraft. While the Y-8 variant that China deployed remains unknown, the central point is clear enough: In a cross-strait conflict, a Chinese ‘strike package’ will look very much like the force deployed last week.”

Cropsey warned of the potential dangers for Taiwan around the time of the U.S. election.

“America’s partisan enmity has become so intense that any result in November will be contested; a country embroiled in a succession crisis is much less likely to intervene in a high-end great-power conflict,” he said. “There may never be a better moment for China to strike than the week of Nov. 3.”

A similar concern was raised Monday by Taiwanese Foreign Minister Joseph Wu, who when briefing lawmakers said Beijing may try to take advantage of uncertainties arising during the U.S. elections to increase pressure on the island.

Even so, he said, Taiwan believes the U.S. will maintain, or even reinforce, its military presence in the region.

“Taiwan and the U.S. continue to remain in close communication to ensure there is enough intelligence and time for proactive and sufficient responses against such threats,” Wu said.

Asked whether the outcome of the election may affect recently-announced U.S. arms sales to Taiwan, Wen said he did not believe U.S. policy would change, although if the White House changes hands the procurement process could be delayed while new officials take up their posts.

Chinese foreign ministry spokesman Zhao Lijian in response to the announcement accused the U.S. of undermining China’s “sovereignty,” and announced that Beijing would impose sanction against the relevant U.S. manufacturers – Boeing, Lockheed Martin, and Raytheon.

He demanded that the U.S. “stop selling weapons to Taiwan or having any military ties with it,” adding that China “will continue taking necessary measures to safeguard national sovereignty and security interests.”

At the weekend Taiwanese President Tsai Ing-Wen told a national security meeting that the defense ministry was closely watching developments, and that Taiwan was ready to defend itself against any aggression from Beijing.

Chinese defense ministry spokesman Colonel Wu Qian told a briefing on Thursday that the PLA is  “able and determined to defend the national sovereignty and territorial integrity, and defeat any form of separatist attempts for Taiwan independence.”

He declined to comment on recent media reporting about China’s stationing of Dongfeng-17 hypersonic missiles along its southeast coast – in two provinces facing Taiwan – saying military deployments were secret.

“Don’t try to kick against the pricks,” he advised.