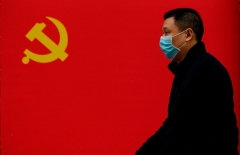 A man passes a Communist Party flag in Wuhan on March 31, 2020. (Photo by Noel Celis/AFP via Getty Images)

(CNSNews.com) – Almost two years after the World Health Organization officials asked China for urgent details about reported cases of a “viral pneumonia of unknown cause” in Wuhan, a purportedly independent Chinese think tank has published a report blaming the United States for the once-in-a-century coronavirus pandemic.

Not only was the U.S. “most likely” the source of the virus that causes COVID-19, but it is also “the country most responsible for the fast global spread of the virus,” says the report by the Taihe Institute.

“Its political manipulation of the disease has made the global anti-pandemic efforts particularly difficult and challenging,” says the report, produced by the Beijing-based institute in conjunction with another Chinese think tank.

China’s Xinhua state news agency carried the report in full, as did the People’s Daily, a Chinese  Communist Party (CCP) mouthpiece. It was quickly picked up by media outlets in countries hostile to the U.S., such as Iran.

The Taihe Institute describes itself as an “independent” non-profit think tank, established in 2013 with a mission of providing “informed analysis and opinion by way of in-depth research and be a main source of new ideas to help interested people better understand China and the rest of the world.”

Its roster of senior fellows includes CCP and People’s Liberation Army alumni, along with prominent non-Chinese figures with communist backgrounds, such as Rashid Alimov of Tajikistan and the Bulgarian former head of the U.N. cultural agency UNESCO, Irina Bokova.

The report includes a smattering of conspiracy theories, seeking to link the coronavirus outbreak to the U.S., and in particular the U.S. military – claims that Chinese foreign ministry officials have been promoting since soon after the virus emerged in Wuhan before spreading across the globe.

Among them, that a temporary suspension of operations at the U.S. Army Medical Research Institute of Infectious Diseases in Fort Detrick, Maryland in the summer of 2019 was in some way linked to the coronavirus outbreak.

“The lab was abruptly shut down by the U.S. military over suspected leakages in July 2019,” it says. “The closure of the lab was followed by reports of outbreaks of pneumonia of unknown cause with similar symptoms as COVID-19 in the surroundings of Fort Detrick. The possibility that Fort Detrick is the origin of the pandemic cannot be ruled out.”

Local media reporting at the time said the temporary shutdown occurred after CDC inspectors identified concerns relating to wastewater decontamination system processes, with the lab emphasizing that no infectious pathogens had been found outside authorized areas.

Fort Detrick commanding officer Brig. Gen. Michael Talley told a Pentagon briefing in March last year that the problems identified by CDC were “work-arounds that just were not safe.”

“There was never any danger of risk to the community, or breaking the containment which is what the labs are for,” he said.

The Taihe Institute report also refers to accounts suggesting COVID-19 infections had been detected, post facto, in the U.S. and other countries (other than China) – going back earlier than when the early cases were found in Wuhan.

It says that “outbreaks in many countries have been traced to the United States,” citing information from several countries, including Costa Rica, Bhutan, and Kenya.

The report criticizes what it calls “irresponsible and lax outbound travel measures” on the part of the U.S., attributing it to factors including “the strong concept of so-called ‘human rights and freedom.’”

“While most countries are imposing strict prevention and control measures during the pandemic, the United States adopted a laissez-faire policy. Some basic measures, including wearing masks, social distancing and practicing stay-at-home order, have not yet become a consensus in the U.S. society.”

In fact as reported in April last year, the first cases to be identified outside China were all people who left Wuhan in January 2020 – before the authorities locked down the city on January 23.

China waited until January 21, 2020 before acknowledging in public for the first time that human-to-human infections were taking place in Wuhan. On January 22, Wuhan authorities announced that a strict quarantine would begin the following day.

In the interim – as Wuhan’s mayor acknowledged – about five million people of a total population of over 11 million, left the city ahead of the lockdown, including for the lunar new year.

Elsewhere the report takes the U.S. to task for blaming China for the outbreak.

“The United States has attempted to cover up its misdeeds by shifting the blame to others even to this day. It has been busy politicizing origins tracing and smearing China, and has turned a deaf ear to questions from around the world.”

Security personnel outside the Wuhan Institute of Virology in Wuhan during a brief visit in February 2021 by members of the World Health Organization (WHO) study team. (Photo by Hector Retamal/AFP via Getty Images)

Investigations into the origins of the pandemic have led to hypotheses including a natural animal-to-human jump in or around Wuhan and the possibility of an accidental leak from a laboratory in Wuhan.

President Biden last spring tasked the U.S. intelligence community to look into how the pandemic began, probing both theories. When the agencies reported back – at a time when global news coverage was focused on the disastrous U.S. withdrawal from Afghanistan – their assessments were divided and inconclusive.

Meanwhile Beijing has refused to cooperate with a second phase of a WHO investigation into the origins of the coronavirus. Among other things, the inquiry plans to “audit” the suspect laboratories in Wuhan.

Almost 5.4 million deaths worldwide, including more than 816,500 in the United States, have been attributed to the coronavirus since it first emerged in Wuhan.