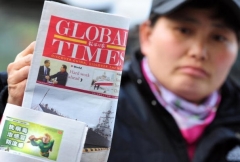 Global Times is a mouthpiece of the Chinese Communist Party (Photo by Frederic J. Brown/AFP via Getty Images)

(CNSNews.com) – A Chinese state mouthpiece reacted to the fall of Kabul to the Taliban Monday by saying the crisis has dealt a severe blow to U.S. “hegemony,” and suggesting allies like Taiwan should be careful about placing their trust in the U.S.

It published an editorial contrasting the U.S. commitment to Afghanistan and its commitment to Taiwan, and concluding that if it “abandoned” Afghanistan, then the ruling pro-independence Democratic Progressive Party (DPP) in Taiwan should “wake up from their dreams.”

“From what happened in Afghanistan, they should perceive that once a war breaks out in the [Taiwan] Straits, the island’s defense will collapse in hours and the U.S. military won’t come to help,” Global Times opined. “As a result, the DPP authorities will quickly surrender, while some high-level officials may flee by plane.”

China views Taiwan as a rebellious province that will be reincorporated into “one China” eventually, by force if necessary. The U.S. is committed under the 1979 Taiwan Relations Act to protecting the island democracy from unprovoked aggression, and to providing it with military aid.

Last March, the outgoing commander of U.S. Indo-Pacific Command, Admiral Philip Davidson, told a Senate panel that China’s threat to Taiwan could become “manifest during this decade, in fact, in the next six years.”

The CCP paper warned that U.S. military intervention in the Taiwan Strait would require much greater determination than it displayed in either Afghanistan or Vietnam, and would cost it “a huge price.”

“[H]ow many lives of U.S. troops and how many dollars would the U.S. sacrifice for the island of Taiwan?” it asked rhetorically.

In another article, Global Times quoted an academic attached to the government-run China Foreign Affairs University as saying the U.S. departure from Afghanistan was a “warning to the Taiwan secessionists, or, rather, a forecast.”

The paper’s editor-in-chief posted a mocking tweet saying Taiwanese officials should secretly buy Chinese national flags so they can take them out to wave when the People’s Liberation Army captures the island.

“After the fall of the Kabul regime, the Taiwan authorities must be trembling,” tweeted Hu Xijin. “Don’t look forward to the US to protect them. Taipei officials need to quietly mail-order a Five-Star Red Flag from the Chinese mainland. It will be useful one day when they surrender to the PLA.”

DPP lawmaker Cheng Yun-peng rejected parallels between Afghanistan and Taiwan, pointing out that the U.S. has no military forces on the island to withdraw.

“Taiwan has our own military for national defense, while we collaborate with other militaries and procure arms from the U.S. and other allied countries,” Cheng commented on Facebook.

“The sudden withdrawal of forces by the United States has already caused a serious negative impact on the situation in Afghanistan,” the foreign ministry quoted Wang as telling Blinken in a phone call. “If the next step is to create new problems, it is not a responsible attitude.”

Wang used the opportunity to advise the U.S. to change its policies towards China, too.

As permanent members of the U.N. Security Council, he said, “China and the United States should work together on global challenges as the international community expects. The U.S. should stop the political oppression and senseless restrictions against China.”

The U.S. and China have serious differences across a range of issues, including Hong Kong, Taiwan, the South China Sea, Xinjiang, human rights, trade disputes, cyber attacks, and the coronavirus pandemic.

A brief State Department readout of the Blinken-Wang call gave few details, saying simply that the two men spoke “about developments in Afghanistan, including the security situation and our respective efforts to bring U.S. and PRC citizens to safety.”

At a daily briefing, China’s foreign ministry voiced hope that the Taliban would build a “broad-based and inclusive” government, but stopped short of stipulating that or any other condition for Beijing’s recognition.

Asked whether China recognizes the Taliban as a legitimate government, spokeswoman Hua Chunying did not give a direct answer, but underlined the government’s stance on “non-interference.”

“On the question of ‘recognition’ or not, I want to say that China’s position with respect to all countries in the world, including Afghanistan, is non-interference in other countries’ internal affairs and respect the right of people of all countries to independently choose their development path and decide their destiny and future,” she said. “China’s position has been consistent all along.”

(In line with that “non-interference” policy, China has not withdrawn recognition from governments whose legitimacy has been called into question by some Western nations, like the Assad and Maduro regimes.)

Hua said that China stands “ready to continue to develop good-neighborliness and friendly cooperation with Afghanistan and play a constructive role in Afghanistan’s peace and reconstruction.”

Wang hosted a Taliban delegation for talks late last month, and said afterwards that “the Afghan Taliban is an important military and political force in Afghanistan and is expected to play an important role in the country’s peace, reconciliation and reconstruction process.”

Beijing said it also secured pledges from the Taliban that it would not support Islamist militants in Xinjiang.