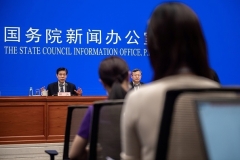 Chinese ministers hold a briefing at the State Council Information Office in Beijing last May. (Photo by Nicolas Asfouri/AFP via Getty Images)

(CNSNews.com) – For the 20th consecutive year, China’s cabinet has prepared for release a report examining the human rights record of the United States. This time, it will criticize the U.S. for leading the world in the number of lives lost to COVID-19, the respiratory disease that spread across the globe after an outbreak in the Chinese city of Wuhan.

In a preview of the 15,000-Chinese character (9,000-10,000-word) report, the State Council Information Office said it would provide “facts regarding Washington’s incompetent pandemic containment leading to tragic outcomes.”

“In 2020, the COVID-19 pandemic wreaked havoc around the world, posing a major threat to human security,” said the SCIO preview. “It went out of control in the United States following the government’s reckless response.”

“The United States, home to less than 5 percent of the world’s population, accounted for more than a quarter of the world’s confirmed COVID-19 cases and nearly one fifth of the global deaths from the disease,” it continued. “More than 500,000 Americans lost their lives due to the virus.”

“While global solidarity is much needed during the fight against the pandemic, the U.S. insisted on pursuing a ‘U.S. first’ policy, promoting isolation and unilateralism, imposing sanctions on others and bullying international organizations …”

Aligning with Beijing’s narrative of the way the crisis unfolded, the assertions in the soon-to-be-released report fly in the face of criticism of the Chinese Communist Party’s own role, including allegations that it sought to cover up the outbreak in the early stages, punished those trying to spread the alarm, allowed people from Wuhan to fly abroad and facilitate its spread, circulated disinformation about the origins, and slow-walked crucial cooperation with outside experts.

Highly critical of Beijing’s actions and dissatisfied with the way the World Health Organization dealt with China over that period, President Trump announced plans to withdraw from the U.N. agency – likely what the SCIO is referring to in accusing the U.S. of “bullying international organizations.” (President Biden has reversed the move.)

The U.S. coronavirus death toll stands at over 516,470, according to Johns Hopkins University’s real-time coronavirus database.

China, with a population more than four times larger, had reported 4,636 deaths as of midnight on Tuesday, according to China’s National Health Commission. That places it behind numerous countries with a tiny fraction of its population. (The four countries just above China in the number of deaths reported according to JHU are Bosnia, Croatia, Israel and Panama, with populations ranging from 3.8 million to 8.7 million.)

China throughout has promoted the line that it was totally transparent about the outbreak from the outset, that it brought “precious time” for the rest of the world, and that the international community has acknowledged its “speed, scale and efficiency.”

Along with America’s handling of the pandemic, the SCIO report also will assess “political chaos” sparked by “American democracy disorder,” racial discrimination, gun violence, “continuous social unrest threatening public security,” the U.S. “trampling on international rules resulting in humanitarian disasters,” and the view that elections in the U.S. have become “a ‘one-man show’ of the wealthy class.”

It’s not clear exactly when the State Council report will be released, but every year since February 2001 it has released a pre-prepared report shortly after the State Department issues its annual report on human rights around the world. In its diplomatic tit-for-tat, China’s report focuses solely on the U.S., while the U.S. reports now cover just under 200 countries and territories.

The U.S. reports are meant to be released by February 25 each year, although the statutory deadline is missed most years. The State Department’s Office of the Inspector General in 2010 ascribed that in part to the fact the report is among the most personnel-resource intensive of all those the department is mandated by Congress to prepare.