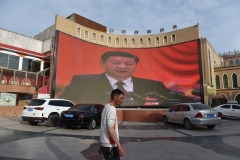 A giant screen beams images of Chinese President Xi Jinping, in the city of Kashgar, Xinjiang, in June 2019. (Photo by Greg Baker/AFP/Getty Images)

(CNSNews.com) – Slamming the United States over its criticism of China’s policies in Xinjiang, Beijing’s mission to the United Nations said on Monday the U.S. claims to care about the human rights of Muslims “despite the world-known fact that the U.S. has been killing Muslims in Afghanistan, Iraq and Syria.”

The striking attack from a government whom the U.S. and others accuse of committing genocide against Uyghur Muslims in the far-western region came as the Chinese mission called on U.N. member-states to stay away from an event planned on the sidelines of the U.N. this week focusing on the Xinjiang situation.

Reuters reported earlier that China had sent a note urging missions not to take part in a virtual event being planned for Wednesday, to be addressed by the U.S., British and German ambassadors to the U.N., along with representatives of leading human rights advocacy groups. The event aims to “discuss how the U.N. system, member states and civil society can support and advocate for the human rights of members of ethnic Turkic communities in Xinjiang.”

On the last day of the Trump administration, then-Secretary of State Mike Pompeo issued a determination that China had, since at least March 2017, committed crimes against humanity against the ethnic and religious minorities in Xinjiang, including deprivation of liberty affecting more than a million people, forced sterilization, forced labor, and “draconian restrictions” on freedom of religion – crimes which he said were ongoing, and which constituted genocide.

The Biden administration concurred, and formalized that position in the State Department’s annual human right report, released last month, which stated, “Genocide and crimes against humanity occurred during the year [2020] against the predominantly Muslim Uyghurs and other ethnic and religious minority groups in Xinjiang.” 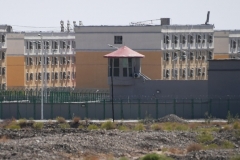 China characterizes the mass incarceration of Muslims as an educational and vocational program targeting Islamic radicals. It denies charges of atrocities, and claims Uyghurs are a thriving and contented community.

“China’s achievements in protecting human rights are known to all,” the Chinese mission statement said. “It is the U.S. and other co-sponsors who need to reflect on their poor treatment of minorities in their own countries.”

Much of the vitriol in the statement was directed at the United States.

“The U.S. claims to care about the human rights of Muslim people despite the world-known fact that the U.S. has been killing Muslims in Afghanistan, Iraq and Syria,” it said. “It is the U.S. and its followers that have killed the largest number of Muslims in the world.”

The mission also suggested that the U.S. and its allies were undermining global “unity” needed to combat the coronavirus pandemic.

“As the COVID-19 pandemic is still ravaging, U.N. member-states are calling for international solidarity in global response and concerted efforts for recovery,” it said. “However, the co-sponsors turn a deaf ear to the strong call, persistently politicize human rights issues, provoke political confrontation and undermine the unity and collaboration of member-states.”

(The pandemic, believed to be among the ten deadliest in recorded history, began with an outbreak that emerged in China’s Wuhan in late 2019.)

In Beijing, Chinese foreign ministry spokeswoman Hua Chunying also weighed in, bristling at the fact the meeting was being presented as a “sideline” event at the United Nations.

“The U.S., rallying a handful of countries like the U.K. and Germany, plans to hold the so-called virtual meeting on Xinjiang and falsely calls it a sideline event of the U.N.,” she told a briefing. “The U.S. and the few countries it has assembled are abusing the resources and platform of the U.N. to smear and attack China to serve selfish political interests.”

Hua said a handful of Western countries by no means represents the U.N., let alone the international community.

“If there were a real human rights problem in Xinjiang, wouldn’t the Organization of Islamic Cooperation and its over 50 member states be more concerned than the U.S.?” she asked, referring to the bloc of Muslim-majority nations.

As CNSNews.com has reported, the OIC has been conspicuously silent on the plight of minority Muslims in Xinjiang, despite the fact its Saudi-based secretariat regularly issues statements expressing concern about Muslims facing difficulties or conflict in other parts of the world.

Some Muslim non-governmental groups have been highly critical of that approach by the OIC. Some of the bloc’s leading members, including Egypt, Iran, Pakistan, the United Arab Emirates, and Saudi Arabia, are key partners in China’s Belt and Road Initiative (BRI).

Furthermore, OIC member-states have joined dozens of others, both at the U.N. General Assembly at the Human Rights Council (HRC) in Geneva, putting their names to joint statements supporting China’s policies.

In the most recent such intervention, Cuban representative Juan Antonio Quintanilla read out a statement at the HRC last March on behalf of 64 countries, commending “the people-centered philosophy that the Chinese government pursues and achievements that have been made in its human rights cause.”

“Xinjiang is an inseparable part of China,” Quintanilla said.

“We urge the relevant sides to abide by the purposes and principles of the United Nations Charter, stop interfering in China’s internal affairs by manipulating Xinjiang-related issues, refrain from making unfounded allegations against China out of political motivations and curbing the development of developing countries under the pretext of human rights.”

Islamic, Communist, and Other Autocratic Regimes Back China's Treatment of Muslims in Xinjiang (Oct. 7, 2020)