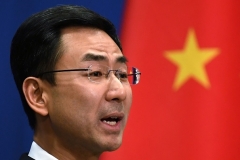 (CNSNews.com) – China’s foreign ministry said Monday the U.S. government should respond in a “timely” fashion to criticism of the administration’s handling of the COVID-19 pandemic – and suggested that the World Health Organization could be “invited to help review this process.”

At the same time, ministry spokesman Geng Shuang slapped down the idea of an independent probe into the outbreak in China of the novel coronavirus, which emerged in Wuhan late last year before spreading across the globe.

“The so-called ‘investigation’ proposed by some people is not consistent with the general trend of concerted international efforts against the virus,” Geng said. “Their political manipulation will make no waves.”

During a ministry press briefing, a Chinese broadcast journalist asked a long and tendentious question about U.S. media outlets’ criticisms of the Trump administration’s pandemic response.

Geng agreed with the Shenzhen TV reporter: “Indeed, many in the U.S. have been questioning and worrying whether the U.S. government has responded timely and effectively to the outbreak.”

“They want to get the facts straight: When did the first case occur in the U.S.? Is the U.S. government hiding something? Why is it so desperately seeking to pin the blame on other countries and international organizations?” he said.

“We hope the U.S. government can timely respond to the concerns of its own people and the international community,” Geng added. “The WHO may also be invited to help review this process.”

The notion that the WHO would be “invited to help review” the U.S. response to the pandemic is fanciful, given U.S. claims that the U.N. health agency deferred to China and did little to challenge its alleged attempts to cover up the outbreak early on.

Accusing the WHO of “severely mismanaging and covering up the spread of the coronavirus,” President Trump on April 14 announced a suspension of new U.S. funding to the agency pending a review into its response.

China and the WHO, however, continue to defend themselves and each other in the face of the criticism.

Asked what it was exactly about the U.S. response that Beijing felt should be investigated, Geng pointed back to the original question.

“The Chinese journalist cited some doubts on the U.S. government from U.S. media, think tanks and professionals. Upon hearing those doubts, people have good reason to express concerns,” he said. “We hope the U.S. government can timely respond to the concerns of its own people and the international community.”

As for calls for an independent investigation into how the outbreak began in China, Geng characterized them as “unhelpful” “political maneuvers.”

He repeated Beijing’s – widely disputed – narrative that China fought the disease “in an open, transparent and responsible manner,” and “carried out international cooperation to contain the virus, all at the earliest time possible.”

Geng said the urgent task facing all countries was to focus on international cooperation “rather than pointing fingers, demanding accountability and other non-constructive approaches.”

The Chinese spokesman was also asked about a Politico report on Friday about a memo sent by the National Republican Senatorial Committee to GOP campaigns, advising them to focus on China’s mishandling of the outbreak.

“We firmly oppose the attempts of some people in the U.S. to grab votes and undermine China’s interests by smearing China in the context of the pandemic and the U.S. presidential elections,” Geng said.

In a Monday Global Times, a Chinese Communist Party organ, accused the U.S. government of trying to mobilize public opinion around the world in its effort to “smear China,” but said it had “few followers.”

The paper suggested that some in the West sought “psychological comfort” in stigmatizing China, because “unlike the West, China has done an outstanding job in fighting the coronavirus.”

It also described claims that China may provide compensation over the pandemic as “a fantasy.”

People’s Daily, another CCP mouthpiece, said Monday the U.S. has no grounds for claiming legal compensation from China.

“To justify such claims, some U.S. politicians have come up with various lies and labeled China as the origin of the virus,” it said. “However, just because the pneumonia broke out in China, that doesn’t mean it originated here, as some of the world’s leading journals have pointed out.”