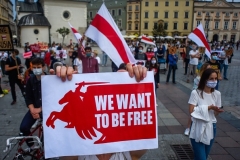 Belarusian pro-democracy protestors in Poland demonstrate against the regime in Minsk. (Photo by Omar Marques/Getty Images)

(CNSNews.com) – Ahead of President Biden’s “summit for democracy,” some of the decisions regarding the list of participating nations are raising questions, while China and Russia are condemning the very notion of the U.S. hosting such an event.

“Does the U.S. have the moral authority or legitimacy to host the summit for democracy?’ Chinese foreign ministry spokesman Wang Wenbin asked on Monday. “The U.S. democracy is in a disastrous state.”

“The U.S. is using democracy as a banner to divide the world into opposing camps,” Wang said. “It is trying to weaponize democracy and use it as tool to advance its geostrategic agenda. It is advancing its hegemony under the guise of democracy.”

The Russian and Chinese ambassadors in Washington made similar arguments in a joint National Interest op-ed on Friday.

“Democracy is not a prerogative of a certain country or a group of countries, but a universal right of all peoples,” wrote Qin Gang and Anatoly Antonov. “It can be realized in multiple ways, and no model can fit all countries.”

While running for the presidency, Biden pledged to “bring together the world’s democracies” in a summit during in his first year in office, but without defining any qualifying criteria.

After the White House in August set a date for what will be a virtual event – December 9-10 – questions about how participants would be selected have stoked debate.

Failure to invite important allies whose democratic credentials are dubious could cause unneeded diplomatic tensions. On the other hand, inviting countries with poor records risked angering pro-democracy advocates, not least of all in those countries themselves.

The final list of 110 invitees released by the State Department earlier this month reveals an attempt to balance those factors – and some of the decisions raised eyebrows.

Autocracies hostile to the West were never expected to be invited, so the absence of the likes of China, Russia, Cuba, Iran, North Korea, Belarus, and the Assad and Maduro regimes was predictable.

Also not wholly unexpected were the decisions to exclude countries that are on better terms with the U.S. but have poor records on democracy – such as Saudi Arabia, Qatar, Turkey, the UAE.

All of those countries and several dozen others are ranked as “not free” by Freedom House, the Washington-based watchdog that grades countries each year on political rights and civil liberties, with scores ranging from 0 for the most repressive regimes to 100 for free democracies.

But the list of invitees does unaccountably include three “not free” countries – Angola, Iraq, and the Democratic Republic of Congo.

Also included are 31 countries ranked “partly free” – some of whom also fall towards the lower end of Freedom House’s annual scores.

Pakistan’s inclusion is noteworthy. Its record on upholding fundamental human rights is widely panned, and it enforces some of the world’s most notorious blasphemy laws at home, while supporting terrorists in Afghanistan and disputed Kashmir.

While Pakistani Prime Minister Imran Khan received an invitation, his counterparts in Singapore, Sri Lanka, and Bangladesh did not make the cut.

Others left off the list include Hungary (69 Freedom House points) – the only one of the 27 European Union member-states excluded – as well as Tunisia (71), Bolivia (66), El Salvador (63) and Bosnia (53). All of those countries have experienced political crises or turmoil of various kinds over the past year or so.

Hungarian Foreign Minister Peter Szijjártó said the exclusion of his country from the summit was disrespectful, and described it as a “domestic politics type of event.”

One invitation decision that has drawn praise – although not from Beijing – was the inclusion of Taiwan, a thriving self-governing democracy, but one which the Chinese government regards as a renegade province.

Sen. Rick Scott (R-Fla.), who had urged Biden in an earlier letter to invite Taiwan, welcomed the decision.

“Taiwan is one of our most valued and strategic partners in the Asia-Pacific, and they are evidence that democracy is for everyone,” Scott said. “They not only deserve a seat at the table during the December summit, but merit our full and unapologetic support in the face of Communist China’s continued attempts at intimidation and threats of takeover.”

China’s Taiwan Affairs Office, which deals with matters regarding the Taiwan Strait dispute, called the inclusion of Taiwan a “mistake,” reiterating that Beijing opposes “any official interaction between the U.S. and China’s Taiwan region.”

White House press secretary Jen Psaki said on Monday the summit would bring together “a broad and diverse group of governmental and non-governmental leaders to set forth an affirmative agenda for democratic renewal around the world.”

“It will bring together 110 governments representing diverse democratic experiences around the world, as well as civil society and private sector leaders,” she said.