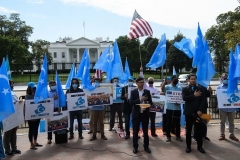 Uyghurs hold a rally near the White House in October to protest the 71st anniversary of the People’s Republic of China. (Photo by Nicholas Kamm/AFP via Getty Images)

(CNSNews.com) – In what may be one of a series of parting shots over the coming weeks, the Trump administration has lifted the terror designation of a Uyghur separatist group which Beijing cites in justifying its policies in the far-west Xinjiang province, including the mass incarceration of more than a million minority Muslims.

Although it is an al-Qaeda ally, ETIM was never on the U.S. government’s list of “foreign terrorist organizations,” but was designated in September 2002 under a post-9/11 executive order designed to disrupt funding to terrorists. In 2004 it was added to the Terrorist Exclusion List, which names groups barred from entering the U.S.

And in 2009 the U.S. Treasury Department designated ETIM leader Abdul Haq, a militant described at the time by the department’s undersecretary for terrorism as a “brutal terrorist.”

In a notice published in the Federal Register late last week, Secretary of State Mike Pompeo announced he was revoking ETIM’s designation as a “terrorist organization” under a section of the Immigration and Nationality Act dealing with classes of foreign citizens ineligible to receive visas to travel to the U.S.

ETIM has now been removed from the Terrorist Exclusion List.

Bigger than Alaska, the resource-rich Xinjiang region is home to about 10 million Uyghurs (Uighurs), Turkic-speaking Muslims who briefly exercised independence as East Turkestan in the 1930s and 40s, but whose homeland came under communist Chinese rule in 1949.

Beijing encouraged settlement by millions of Han Chinese, a move critics say has undermined Uyghurs’ cultural and religious identity. Since 2017, according to the State Department, Chinese Communist Party (CCP) policies in Xinjiang include “the mass detention of more than one million individuals in internment camps.” Recent reports of forced birth control including sterilization have added to concerns about the scale of abuses.

After 9/11, China viewed the Bush administration’s war on terror as an opportunity to win international support for its campaign against Uyghur separatism. The U.S. designated ETIM, and the U.N. Security Council added it to its consolidated list of terrorist organizations in 2002.

Among the hundreds of suspected terrorists detained by the U.S. military after invading Taliban-ruled Afghanistan after 9/11 were 22 Uyghurs. U.S. authorities later determined that they were not “enemy combatants” and, fearing that they would face execution if returned to China, approached third countries willing to take them. Some were later resettled in Albania, Bermuda, Palau and Switzerland.

In a letter to the Chinese government late last year, U.N. human rights experts voiced concern that counter-terror legislation enforced in Xinjiang was “neither necessary nor proportionate” to address the security challenges.

Western governments and rights advocates have accused Beijing of using counterterrorism as a pretext for repression against Uyghurs, whether or not they support ETIM or hold separatist views.

Under the Trump administration the criticism became more forceful, especially as evidence began to emerge of mass incarceration and abuses.

Pompeo has met with Uyghurs formerly held in the camps, and announced visa restrictions on Chinese officials linked to the repression, accusing the CCP of “methodically attempting to strangle Uyghur culture and stamp out the Islamic faith,”

“The rash move by the Trump administration toward ETIM undoubtedly impairs the international community's joint efforts in fighting terrorism,” said the Global Times, a CCP organ.

“The premise of international cooperation against terrorism is that all countries remain on the same page on terrorism-related issues, rather than implement double standards or exploit it as a vehicle to contain another country.”

China Daily, another CCP paper, said in an editorial Monday that delisting ETIM “means the U.S. will give a green light to not only its members’ entry into the country, but also that it will likely assist and fund the group, at the cost of humanity and justice.”

“Currently China justifies its mass detention of 1 to 3 million Uyghurs in concentration camps as a counter-terror measure. Today’s revocation removes any Chinese justification that it is fighting terrorism in East Turkestan,” said World Uyghur Congress president Dolkun Isa, who has himself been labeled a “terrorist” by Beijing.

“The harmful effects of China’s exploitation of the imagined ‘ETIM’ threat are real – 20 years of state terror directed at Uyghurs,” said Omer Kanat, executive director of the Uyghur Human Rights Project. “This long-overdue decision is a definitive rejection of China’s claims.”