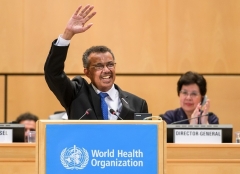 World Health Organization Director-General Tedros Adhanom was elected to the post in May 2017. (Photo by Fabrice Coffrini/AFP via Getty Images)

(CNSNews.com) – Any investigation into the coronavirus pandemic should be carried out by the World Health Organization, a Chinese Communist Party newspaper declared on Sunday, on the eve of WHO’s annual assembly where dozens of countries are expected to press for a review.

Urging other nations not to be “held hostage by Washington’s plot” to blame China for the crisis, the Global Times said in an editorial that there should be an investigation, but not of the type that the U.S., echoed by some Western allies, has been calling for.

“A scientific investigation should be carried out,” it said. “But first of all, it should be led by WHO rather than any country or regional organization.”

“Second, the investigation needs to be scientific and fair. Not only China-related factors, but also those related to the U.S. and other countries need to be included.”

The Trump administration has led condemnation of China’s handling of the outbreak that began in Wuhan late last year, and has also been sharply critical of the WHO. President Trump called the U.N. agency’s leadership “China-centric” and suspended new U.S. funding pending a review.

“China, the country where the virus originated and the pandemic was allowed to spread, has refused to share information to help the world respond to the COVID-19 pandemic,” Secretary of State Mike Pompeo tweeted on Friday, underlining what he and others in the administration have been charging for weeks.

In an earlier interview, he said the CCP has “relentlessly deceived and denied information to the West,” while trying to “manage” the WHO and the flow of information about the outbreak.

WHO Director-General Tedros Adhanom has rejected the criticism.

At the WHO World Health Assembly (WHA) which begins on Monday, more than 60 countries are expected to back a draft resolution calling for an “impartial, independent and comprehensive evaluation” of the international response to the pandemic.

They do not necessarily share the outspoken U.S. criticism of China, however, and the European Union for one has cautioned against a “blame game,” while stressing the importance of determining how the virus spread.

Those that have been more critical, such as Australia, have angered Beijing, resulting in punitive trade measures.

The WHA has been downgraded this year from a week-long mass gathering in Geneva to a two-day virtual event that will be dominated by the coronavirus, which has been blamed for more than 300,000 deaths around the world.

Also on the truncated agenda is a request by 14 countries for the WHA to invite Taiwan to take part in the meeting, in the face of determined Chinese opposition.

Taiwan Health Minister Chen Shih-chung, center, poses with demonstrators on the sidelines of the WHA in Geneva in 2018. (Photo by Fabrice Coffrini/AFP via Getty Images)

The countries, which all have diplomatic ties with Taiwan, said in supportive documents that Taiwan’s exclusion from WHO “has seriously compromised the organization’s overall disease prevention efforts, undermined the interests of its members, and endangered global health.”

Taiwan is the only de facto sovereign country not permitted to attend the WHO, even as an observer, because Beijing claims it to be a rebel province and part of “one China.”

In a separate initiative, the U.S. this year has lobbied hard for allies to back Taiwan’s participation, a stance backed by Japan, Canada, France, Germany, Britain, Australia, and New Zealand.

Pompeo has also called directly on Tedros to invite Taiwan, but the WHO says it’s a matter for member-states, not the secretariat.

Taiwan’s supporters say its exclusion is detrimental to the 23 million people of the island, particularly during severe epidemics such as the current one. At the same time, Taiwan has been widely praised for its own response to the coronavirus outbreak. Although just 80 miles from China at its nearest point, Taiwan has managed to keep the number of confirmed COVID-19 cases low – just 440 as of Sunday, with seven deaths reported.

Taiwan meanwhile has donated more than 17 million surgical masks to countries around the world grappling with the pandemic, including the U.S.

Chinese foreign ministry spokesman Zhao Lijian said at a briefing Friday WHA proceedings would be disrupted by the Taiwan issue.

“The few countries that insist on discussing the proposal relating to the Taiwan region are only aiming to politicize the health issue to seek selfish political gains even at the expense of hijacking the WHA and undermining global anti-pandemic cooperation,” he said.

Zhao expressed confidence that the initiative would be “firmly rejected by the vast majority of the international community.”