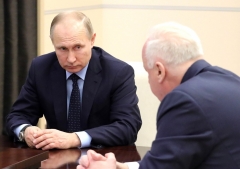 President Vladimir Putin meets with Aleksandr Bastrykin, the head of Russia’s Investigative Committee, in 2018. Bastrykin is the most senior Russian targeted in the new British sanctions announced on Monday. (Photo: The Kremlin)

(CNSNews.com) – Britain on Monday announced its first-ever unilateral sanctions for human rights abuses, freezing assets and denying entry to 47 individuals and two organizations, with Russian nationals linked to the torture and death in custody of lawyer Sergei Magnitsky the first to be listed.

In a move slammed by the Russian government, Foreign Secretary Dominic Raab named 25 Russians – including judges and senior officials in the prosecutor’s office, interior ministry, and the detention facility where Magnitsky died in November 2009 – as the first targets of the new sanctions regime.

Also on the list are 20 Saudi nationals, linked to the Oct. 2018 murder of Saudi writer Jamal Khashoggi in the Saudi Consulate in Istanbul; two Burmese military commanders accused of responsibility for atrocities against Muslim minority Rohingyas; and two departments responsible for running the North Korean regime’s notorious prison camps. More names will be added later.

Speaking in the House of Commons, Raab said the move sends a clear message – “that those with blood on their hands, the thugs of despots, or the henchmen of dictators, won’t be free to waltz into this country to buy up property on the Kings Road, or do their Christmas shopping in Knightsbridge, or frankly to siphon dirty money through British banks or financial institutions.”

“The U.K.’s new powers will complement the efforts of the United States and Canada, further enhancing our ability to act together,” he said.

“The United States will continue to seek out additional allies and partners to jointly leverage all tools at our disposal to deny access to the U.S. and international financial systems to all those who engage in serious human rights abuses.”

The Russian Embassy in London denounced the move as “unfriendly,” warned Moscow reserves the right to take retaliatory steps, and said the decision did not bode well for Russia-Britain relations.

Those relations remain soured over the attempted assassination in March 2018 of former Russian spy Sergei Skripal, who along with his daughter survived exposure to a deadly nerve agent. The Kremlin denies involvement in the episode, which led to the death of an unrelated woman.

“All answers to existing questions regarding the circumstances of Sergei Magnitsky’s death have already been provided,” a Russian Embassy spokesman said. “This British decision was quite obviously aimed solely at public effect.”

Accused of tax evasion and fraud, Magnitsky was arrested in 2008 after alleging the biggest known tax fraud in Russian history. After months in detention, and denied medical treatment for abdominal pain and bladder inflammation, he was – Raab told the House of Commons – “handcuffed and beaten to death by riot police with truncheons. He died on 16 November 2009, aged 37.”

Among those listed for sanctions is Aleksandr Bastrykin, the head of Russia’s Investigative Committee – the main federal investigating authority – and viewed as close to President Vladimir Putin. According to the Foreign Office, “Bastrykin was responsible for the investigation of the mistreatment and death of Sergei Magnitsky in detention and intentionally or recklessly failed to fulfil that responsibility.”

After Magnitsky’s death his client and friend Bill Browder, a U.S.-born investor and founder of Hermitage Capital, lobbied extensively on his behalf, and was instrumental in passage in the U.S. of the 2012 Magnitsky Act, legislation targeting Russian rights violators with sanctions.

In 2016 the U.S. law was expanded to apply to abusers internationally, and similar measures have been put in place in several countries, including Canada, the Baltic states, and now Britain.

After Raab’s address to lawmakers, he met with Browder and Magnitsky’s widow, Natalia, and son, Nikita.

“Their courage inspires our actions today,” said Raab, a former human rights lawyer who first argued for Magnitsky legislation as a backbench member of the House of Commons in 2012.

Leonid Slutsky, chairman of the international committee of the State Duma lower parliament house, dismissed the announcement as “absolutely pointless,” arguing that under Russian law officials are banned from having foreign assets while in office.

Browder, however, told Britain’s ITV news that the law was significant because “every tinpot dictator wants to have a mansion in [London’s] Belgravia, and wants to send their kids to fancy British boarding schools.

“And so, even though Britain is only one country of many in the world, Britain’s punching way above its weight because everyone covets coming here and enjoying what this country has to offer.”

Browder’s campaigning made him a target in Russia, where authorities accused him of tax evasion and other offenses, convicted him in absentia, and unsuccessfully sought Interpol’s assistance in having him arrested and returned to Russia.

During his mid-2018 summit with President Trump in Helsinki, Putin singled out Browder by name when suggesting the U.S. allow Russian investigators to interrogate foreign suspects, in return for Moscow granting U.S. investigators access to Russians indicted for meddling in the 2016 U.S. election.