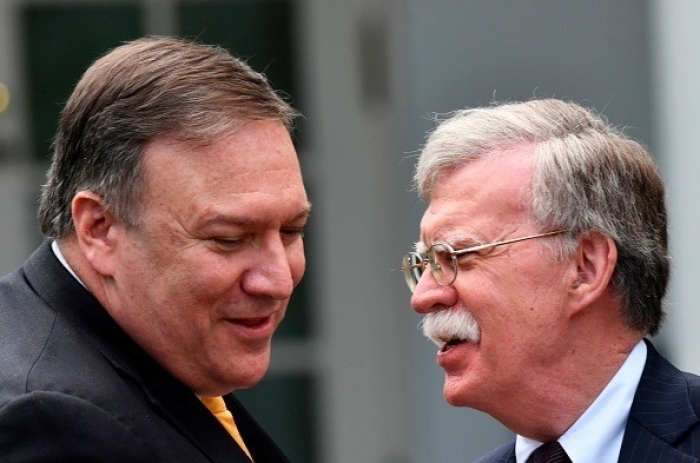 (CNSNews.com) – The Iranian regime’s leaders are “liars, terrorists, and enemies of the United States,” and reentering the Iran nuclear deal would be “an unparalleled self-inflicted wound,” former National Security Advisor John Bolton said on Wednesday, after the Department of Justice said it had uncovered an Islamic Revolutionary Guard Corps plot to kill him.

“Iran’s nuclear weapons and terrorist activities are two sides of the same coin. No responsible U.S. government should think otherwise,” Bolton said, adding that he remains committed to ensuring that the U.S. does not return to the 2015 Joint Comprehensive Plan of Action (JCPOA).

In similar comments to CNN’s Wolf Blitzer, Bolton said it was “a big mistake for the administration to continue to show weakness to Iran by begging to get back into the 2015 nuclear deal.”

“I think it encourages Tehran to engage in just these kinds of terrorist activities,” added Bolton, a longstanding critic of the JCPOA.

The former National Security Advisor and Ambassador to the U.N. spoke after the DOJ unsealed charges against an Iranian IRGC member, Shahram Poursafi, accused of trying to hire individuals in the U.S. to kill him for a $300,000 fee.

The department said the plan was likely to avenge the killing in a January 2020 drone strike of IRGC-Qods Force commander Qassem Soleimani.

Court documents reveal that Poursafi also signaled plans to target a second American, for whose killing his group was prepared to pay the considerably larger sum of $1 million.

The documents don’t name the individual, although Mike Pompeo, who was secretary of state at the time, bore the brunt of much of Tehran’s vitriol following the Soleimani killing.

(Bolton was out of office when Soleimani was killed, having left the administration after falling out with President Trump four months earlier, but is known for his hawkish stance on the regime. “We will use every tool available to pursue Soleimani and others like him,” he said in 2018.)

The unsealing of charges comes weeks before Raisi plans to travel to New York to address the U.N. General Assembly – plans which some Republican senators have urged the administration to block.

It also comes at a sensitive time in the administration’s efforts to salvage the JCPOA, which Trump exited in 2018.  Indirect talks in Vienna concluded this week with what the European Union’s point man described as a “final text” on the table, now awaiting decisions in Tehran and Washington.

Gabriel Noronha, a State Department advisor on Iran during the Trump administration, drew a link between the two issues – and a contrast between the Biden administration’s approach to terror-sponsoring regimes and that of a predecessor.

“In 1993, the Clinton Administration launched 23 cruise missiles at the Iraqi Intelligence Service HQ in retaliation for their attempt to kill George H.W. Bush,” Noronha tweeted. “In 2022, the Biden administration is offering $90+ billion [in sanctions relief and access to foreign exchange reserves] to Iran while they are trying to murder Bolton, Pompeo etc.”

Responding to the DOJ announcement, National Security Advisor Jake Sullivan said the administration “will not waiver in protecting and defending all Americans against threats of violence and terrorism.”

“Should Iran attack any of our citizens, to include those who continue to serve the United States or those who formerly served, Iran will face severe consequences,” he said in a statement. “We will continue to bring to bear the full resources of the U.S. government to protect Americans.”

According to the court documents, between last October and earlier this year, Poursafi attempted to arrange the murder of Bolton, in Washington, D.C,. or Maryland, on behalf of the IRGC Qods Force.

But Poursafi, who never entered the U.S. but carried out the communications via encrypted apps, was unwittingly dealing with an informant for the FBI, described in an affidavit as a “confidential human source” or CHS.

Over several months the informant stalled, and Poursafi expressed the growing frustration of his “group” that the planned killing was taking so long.

Poursafi at various times suggested the target be killed “by car” of with a firearm, the documents said.

Surveillance photos from Bolton’s place of work were sent to Poursafi, who “noted the parking garage would be a good place to kill” him. His group would require video proof that the hit had been carried out.

Poursafi also indicated that his group would want to use the informant for “future jobs.”

He told the informant that targeting another former senior Trump administration official would be “dangerous because there were a lot of people around him/her, but that his/her time would come.”

One particularly troubling episode suggested that Poursafi had access to scheduling information that was not publicly available.

On January 18 this year, the informant sent Poursafi a copy of publicly-available information saying Bolton may be traveling. Poursafi disputed that, but said he needed to check something.

“Within an hour,” he came back and said Bolton was not traveling, and also provided “specific information regarding [his] schedule.”

Poursafi did not give the source of his information, but the FBI agent who compiled the affidavit said he had himself learned both that the scheduling information was accurate – and that it “does not appear to have been publicly available.”

The FBI on Wednesday released “wanted” posters in English and Farsi.

“Shahram Poursafi is wanted for his alleged involvement in criminal activities to include material support to terrorism and the attempted murder for hire of a former high-ranking United States Government (USG) official,” it said. 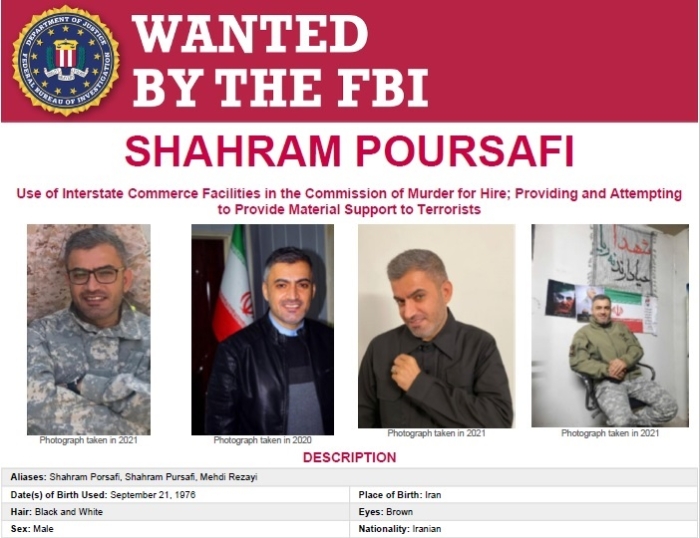 Iranian FM on Avenging US Killing of Soleimani: ‘The Book is Not Closed’ (September 22, 2020)