Blinken to China: Your Actions ‘Threaten the Rules-Based Order That Maintains Global Stability’ 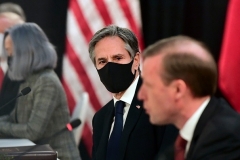 (CNSNews.com) – On the eve of the first high-level meeting between the Biden administration and senior Chinese officials, Beijing warned against what it called “megaphone diplomacy” on the part of the U.S.

But as the talks in Alaska got underway on a chilly note Thursday it was the U.S. side that said the Chinese delegation appeared “to have arrived intent on grandstanding, focused on public theatrics and dramatics over substance.”

Given the state of the bilateral relationship, the two days of discussions in a hotel ballroom in Anchorage were always expected to be frank. But the opening statements in front of media representatives – normally anodyne introductory remarks – made clear the challenges ahead.

Secretary of State Antony Blinken began by summarizing the importance of the “rules-based international order.”

“That system is not an abstraction; it helps countries resolve differences peacefully, coordinate multilateral efforts effectively, and participate in global commerce the assurance that everyone is following the same rules,” he said. “The alternative to a rules-based order is a world in which might makes right, and winners take all. And that would be a far more violent and unstable world for all of us.”

Blinken said the U.S. wanted to discuss “our deep concerns with actions by China, including Xinjiang, Hong Kong, Taiwan, cyber-attacks on the United States, [and] economic coercion towards our allies.”

“Each of these actions threaten the rules-based order that maintains global stability,” he said. “That’s why they’re not merely internal matters, and why we feel an obligation to raise these issues here today.”

He concluded his opening remarks by saying the U.S. goal was “a more clear-eyed relationship between our countries moving forward.”

National Security Advisor Jake Sullivan then spoke for just over a minute, saying Blinken had “laid out many of the areas of concern, from economic and military coercion to assaults on basic values” which the U.S. delegation intended to discuss in Anchorage.

“We do not seek conflict, but we welcome stiff competition, and we will always stand up for our principles, for our people, and for our friends,” he said. 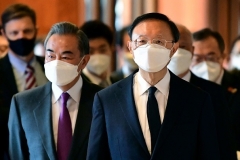 Then it was the turn of the Chinese Communist Party’s top foreign policy official, Yang Jiechi, who aired a litany of complaints about the U.S., accusing it of using its economic and military might to squeeze other countries, failing to deal with its own human rights problems, and pushing its notion of democracy on others at a time of political discontent at home.

On the issue of cyber-attacks, Yang said it was the U.S. that was “the champion” in that sphere.

Yang and the other Chinese principal, Foreign Minister Wang Yi, were quoted as rejecting U.S. criticism over issues like Hong Kong, Taiwan, and Xinjiang, declaring those to be internal issues, and warning against a “Cold War mentality” – all perennial talking-points during Chinese foreign ministry briefings.

According to pool reporters, Yang also ignored an agreed-upon two-minute limit for opening statements, speaking for around 16 minutes.

“Given your extended remarks, let me add a few of my own,” Blinken was then reported to have said, inviting pool reporters not to leave the room as they had been asked to do.

“A confident country is able to look hard at its own shortcomings, and constantly seek to improve,” Sullivan was quoted as telling the Chinese.

A senior U.S. administration official, speaking on background afterwards, said the Chinese delegation seemed “to have arrived intent on grandstanding, focused on public theatrics and dramatics over substance.”

Ahead of the talks, Chinese foreign ministry spokesman Zhao Lijian warned the U.S. not to come to Alaska intent on ganging up on China or employing “megaphone diplomacy.”

The U.S. should “entertain no illusions as regards China’s firm position on upholding its sovereignty, security and development interests,” he told a briefing in Beijing.

China bristles at the U.S. insistence of the importance of a “rules-based international order.”

China’s ambassador to the U.S., Cui Tiankai, who traveled to Anchorage for the meetings, told Chinese state media outlets before they began that any U.S. plans to raise topics like Xinjiang, Taiwan, and Hong Kong “will only lead to a dead end.”

“If anyone thinking the Chinese delegation came to snowy Alaska with sincerity this time to make compromise and concession, then I would suggest that my colleagues in Beijing cancel this trip as soon as possible,” he said. “Why bother coming?”