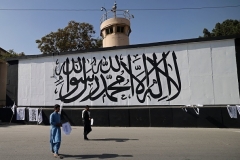 A large Taliban flag, bearing in Arabic the words 'There is no god but Allah and Mohammed is his messenger,' has been painted on a wall outside the U.S. Embassy compound in Kabul. (Photo by Karim Sahib/AFP via Getty Images)

(CNSNews.com) – Secretary of State Antony Blinken on Monday described the Taliban regime in Kabul as “the de facto government of Afghanistan” and characterized the terrorist group’s violent seizure of power from an elected, U.S.-allied government as “one side getting the upper hand in a civil war.”

The remarks came during a five-hour House Foreign Affairs Committee hearing, as Blinken became the first senior administration official to be grilled by lawmakers over the chaotic withdrawal from Afghanistan.

Rep. Adam Kinzinger (R-Ill.) observed that the administration had appeared to shift from a position of building the broadest possible coalition to oppose recognition of a Taliban regime to a stance of saying that it could earn legitimacy through its actions.

“Is the Taliban the legitimate government of Afghanistan, and if not, would you consider what the Taliban have done in Afghanistan to be a coup d’etat?” he asked Blinken.

“With regard to the Taliban and your question, it is the de facto government of Afghanistan,” Blinken replied. “Those are – those are just the facts.”

Kinzinger asked whether there has been any discussion of dealing with a government-in-exile, possibly led by the vice president.

“Is there any discussion of that? Because this to me appears to be an armed military coup against the legitimate elected government of Afghanistan.”

“Congressman, I will certainly look at what the lawyers say. From where I sit, this is the product, alas, of one side getting the upper hand in a civil war.”

In contrast to Afghan President Ashraf Ghani, Vice President Saleh did not flee Afghanistan as the Taliban moved on Kabul in mid-August, but claimed to be interim president under the country’s constitution due to Ghani’s flight.

Saleh joined up in Panjshir province with resistance commander Ahmad Massoud and anti-Taliban forces under his command. The Taliban subsequently claimed to have captured the holdout province, although the Massoud-led movement calling itself the National Resistance Front says its campaign is continuing.

‘The American people don’t like to lose, especially not to terrorists’

Questions surrounding the composition of the cabinet announced by the Taliban last week came up a number of times during the hearing, with Blinken repeating his earlier line that it includes some individuals with “very challenging track records.”

Kinzinger argued that it was essentially the same regime as the one that refused to surrender Osama bin Laden to face justice after al-Qaeda’s 9/11 terror attacks, noting that key figures including the prime minister, deputy prime minister, foreign minister, all held leadership posts at the time of the 9/11 attacks.

“So if you look at that list and you see those individuals who not only defended al-Qaeda but committed crimes against women and vulnerable populations, and I think anybody would look at that and say, this is the same regime that failed to hand over Osama bin Laden 20 years ago.”

“Shockingly, the White House has described this Taliban regime as ‘business-like and professional,’” the committee’s ranking member, Rep. Michael McCaul (R-Texas) said during his remarks. (The words appeared in a National Security Council statement relating to the first charter flight allowed to leave Kabul following the end of the U.S. evacuation mission.)

“So let’s meet a few of these professionals – the so-called ‘new and improved’ Taliban,” McCaul said, noting that the prime minister “sheltered Osama bin Laden for years,” and that the man appointed interior minister – and as such “responsible for overseeing policing and counterterrorism” – was Sirajuddin Haqqani, a U.S.-wanted and sanctioned terrorist, and “head of the brutal Haqqani Network with close ties to al Qaeda.”

“Mr. Secretary, the American people don’t like to lose; especially not to terrorists. But that is exactly what has happened,” McCaul said.

“This has emboldened Taliban and our adversaries. The Taliban – a designated terrorist group – is now equipped with more American weapons than most countries in the world.”

Under questioning from Rep. Mark Green (R-Tenn.), Blinken confirmed that the Taliban was a designated terrorist organization.

“If they’re a terrorist organization, if they have people in their leadership who are on the FBI’s terrorist watchlist,” Green asked, “what makes it right to even negotiate with these people?”

“Anything we do, congressman, will be for the purposes of advancing the interest and national security of the United States,” Blinken replied, adding that any engagement with the Taliban would be done “in a way that’s fully consistent with our laws.”

The Taliban is a specially designated terrorist organization (SDGT) under executive order 13224, a post-9/11 tool designed to disrupt funding to terrorists. Americans are prohibited from doing business with SDGTs, and any assets they may have in the U.S. are frozen.

The Taliban has not, however, been designated a foreign terrorist organization (FTO), although its Haqqani Network is a designated FTO.  It is a crime for Americans to knowingly provide “material support or resources” to or receive military-type training from or on behalf of, a designated FTO.