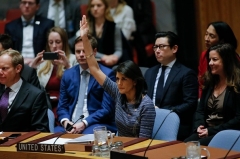 Ambassador to the U.N. Nikki Haley votes for a Security Council resolution imposing the toughest sanctions in history on North Korea, in December 2017. (Photo by Kena Betancur/AFP via Getty Images)

(CNSNews.com) – President Trump’s approach to North Korea has led to the regime being “closer to a nuclear weapon than they were before,” Democrat presidential nominee Joe Biden said in an interview late last week, suggesting also that the current president has eased economic pressure on Pyongyang.

Both assertions are flagrantly false.

In an interview with CNN's Jake Tapper, Biden accused Trump of having “made some cockamamie deal to his good friend – sending love letters to Kim Jong Un. I mean, what in God’s n— I mean, to Kim, in South -- North Korea. What in God’s name is that all about? He gave him legitimacy.”

“We had firm, firm constraints on what they could buy, what they could sell, in their economies. He’s blown it,” Biden continued. “He’s given them so much credibil— they’re closer to a nuclear weapon than they were before.”

The claim that North Korea is closer now to having a nuclear weapon than it was “before” Trump became president is absurd.

North Korea carried out its first successful nuclear test in 2006, when President George W. Bush was in the White House, and has tested another five since then – four of them on President Obama and Vice President Biden’s watch.

Not only has Trump not relaxed economic pressure on North Korea, it was under his administration that the U.N. Security Council imposed the toughest measures ever on the Stalinist regime.

Those sanctions were contained in a Security Council resolution passed unanimously in September 2017, just days after the Kim Jong Un regime carried out its sixth nuclear test, and after then-U.S. Ambassador to the U.N. Nikki Haley had called for the “strongest possible measures” against Pyongyang.

The sanctions imposed under Security Council resolution 2375 banned more than 90 percent of the regime’s publicly-reported exports, in a bid to deprive it of revenue to fund its nuclear and missile activities. It capped refined petroleum exports to North Korea at two million barrels a year.

Although resistance from veto-wielding China and Russia prevented the U.S. from including a total oil embargo in the resolution, it was nonetheless harsher than those passed by the council under the Bush administration after the first nuclear test in Oct. 2006, or those passed by the council under the Obama administration after the second, third, fourth and fifth nuclear tests, in May 2009, Feb. 2013, Jan. 2016 and Sept. 2016.

Three months after resolution 2375 was passed, the Security Council passed another, even tougher one, in reaction to the regime’s most-successful-to-date intercontinental ballistic missile test.

Resolution 2397, endorsed unanimously on Dec. 22, slashed the cap on refined petroleum imports from the two million barrels set in September, to just 500,000 barrels. It also banned the export of food, machinery and electrical equipment, called for the repatriation of all North Korean nationals earning income abroad within 24 months. Member-states were authorized to inspect and seize any vessel in their waters found to be sanctions-busting on behalf of North Korea.

The sanctions put a cap on a year of belligerent rhetoric, significant missile testing, and the September nuclear test.

Just 10 days later, Kim Jong Un in a 2018 new year’s address made an unexpected offer to send a delegation to take part in the soon-to-begin Winter Olympics in South Korea, setting the scene for the first North-South talks in two years and, later that year, the first historic Kim-Trump summit focused on denuclearization.

On the eve of that summit in Singapore, Kim also agreed to a moratorium on nuclear and long-range ballistic missile testing. Despite subsequent ups-and-downs in diplomatic efforts to advance the denuclearization goal, that moratorium continues to hold.