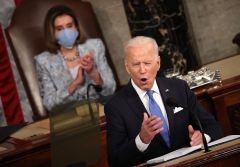 (CNSNews.com) – U.S. forces went into Afghanistan “to get terrorists,” not to launch a “multigenerational undertaking of nation-building,” President Biden said in his speech to a joint session of Congress on Wednesday night.

He pointed out that some personnel serving in Afghanistan today were not born when al-Qaeda attacked America on 9/11.

Using language similar to that used by his predecessor regarding U.S. military deployments in the Middle East, Biden said, “American leadership means ending the forever war in Afghanistan.”

The Trump administration in February 2020 concluded an agreement with the Taliban, setting the stage for a withdrawal of all U.S. forces by the end of April 2021, on condition the Taliban take certain steps, including moves to sever the alliance with al-Qaeda which led to the U.S. invasion after 9/11.

Biden said in March that the deadline would be hard to meet, and earlier this month he announced plans to pull out all troops by September 11, the 20th anniversary of the deadly attack. NATO and partner nations’ troops will also depart before that date.

Foreign policy did not feature prominently in the president’s speech, but he did devote a minute-and-a-half to a justification of the Afghanistan withdrawal decision.

“The war in Afghanistan, as we remember the debates here, was never meant to be multi-generational undertakings of nation-building.”

“We went to Afghanistan to get terrorists – the terrorists who attacked us on 9/11,” Biden said. “And we said we would follow Osama bin Laden to the gates of hell to do it. If you’ve been in the upper Kunar valley [straddling the Afghanistan-Pakistan border] you’ve kind of seen the gates of hell. And we delivered justice to bin Laden.”

“We degraded the terrorist threat of al-Qaeda in Afghanistan. And after 20 years of value – valor and sacrifice, it’s time to bring those troops home,” he said.

Almost 3,000 people were killed when planes hijacked by al-Qaeda terrorists flew into the World Trade Center in New York, the Pentagon, and a field in rural Pennsylvania. After the Taliban, which at the time controlled most of Afghanistan, refused to surrender bin Laden the U.S. invaded and toppled the regime.

Bin Laden disappeared, later crossing into Pakistan where he eventually holed up in a compound less than half a mile from Pakistan’s leading military academy. On May 2, 2011 U.S. Navy SEALS raided the compound and killed him.

(Biden acknowledged afterwards that he had urged President Obama to await more proof of bin Laden’s presence at the compound before giving the go-ahead for the risky operation. That was corroborated by other national security team members present at meetings to discuss the issue, with then-Defense Secretary Robert Gates writing in a later memoir that “Biden’s primary concern was the political consequences of failure.” Biden said later he had not opposed the raid but had told Obama privately to go with his “instincts.”)

Biden wrapped up the Afghanistan portion of his speech by saying the terror threat has “metastasized” over the past two decades, with al-Qaeda and ISIS terrorists now “in Yemen, Syria, Somalia, and other places in Africa and the Middle East and beyond.”

“And, we won’t ignore what our intelligence agencies have determined to be the most lethal terrorist threat to the homeland today – white supremacy’s terrorism,” he said.

“We’re not going to ignore that either,” Biden added, before segueing into a segment about the death of George Floyd and what he called “systemic racism in our criminal justice system.”

Also See:
US Envoy to Afghanistan: 'We Have Given Blood and Treasure...to Develop a Society Far From Our Own'