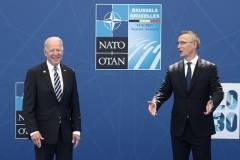 President Biden and NATO Secretary-General Jens Stoltenberg at the NATO summit in Brussels on Monday. (Photo by Kenzo Tribouillard/Pool/AFP via Getty Images)

(CNSNews.com) – Ukrainian President Volodymyr Zelensky on Monday welcomed NATO’s reaffirmation that his country will at some future point become a member of the alliance but expressed disappointment that the summit in Brussels did not lay out “specific time frames for the next steps in our rapprochement with NATO, which we expected.”

Even though Ukraine is not yet a member of NATO, he said in a statement, it was “already making a significant contribution to Euro-Atlantic security.”

“Confronting Russian aggression in the east [of the country], during which, unfortunately, Ukrainian soldiers continue to perish, is our invaluable contribution to the security of the entire Euro-Atlantic area,” Zelensky said.

He said Ukraine’s role in ensuring global security should be “properly assessed,” adding that he would take up his country’s aspirations when he meets with President Biden in Washington next month.

Zelensky also gave an interview Monday to several international news agencies, and voiced the hope that Biden would clearly indicate whether he supports NATO giving Ukraine a “membership action plan” (MAP), putting it on a formal track to membership.

“If we are talking about NATO and the membership action plan, I would really like to get from Biden specifics – yes or no,” he said. “I understand that it must be a coordinated position of alliance members,” he added, referring to NATO’s consensus requirement. “Nevertheless, we must get clear dates, and the likelihood of this for Ukraine.”

But asked at a post-summit press conference in Brussels on Monday night for a “yes or no” position, Biden stopped short of giving unequivocal support for Ukraine’s membership hopes.

“It depends on whether they meet the criteria,” he said. “The fact is they still have to clean up corruption. The fact is they have to meet other criteria to get into the action plan.”

“And so, it’s – you know, school is out on that question. It remains to be seen,” Biden continued. “In the meantime, we will do all that we can to pu – put Ukraine in the position to be able to continue to resist Russian physical aggression.”

Alluding to the consensus requirement, he added, “And it will not just depend on me whether or not we conclude that – that Ukraine can become part of NATO; it will depend on the alliance and how they vote.”

Biden was also asked whether Russia’s occupation of parts of Ukraine was effectively ruling out membership, since if it was a member, NATO and the U.S. would be obliged to defend it against Russia.

“The answer is no,” he replied.

‘The right to choose its own path’

Biden will hold his first summit as president with Russian President Vladimir Putin this week.

Putin bitterly opposes any further expansion of NATO into Russia’s backyard. A push by Ukraine and Georgia to join the alliance has poisoned Moscow’s relations with them, underpinning its military intervention in Georgia in 2008 and Ukraine in 2014.

The Kremlin’s stance has played a crucial role in NATO allies’ failure over more than a decade to reach consensus on putting the two former Soviet republics on a formal path towards accession by granting them MAP status – itself only an intermediate stage on the road to becoming a member.

NATO insists that Russia does not have a “veto” on admitting new members – a point which Secretary-General Jens Stoltenberg made again on Monday – but opposition within the alliance has been tied, since 2008, to concerns about antagonizing a major provider of energy to Europe.

At a summit in Bucharest that year, Germany led a group pushing back against President George W. Bush’s proposal to give MAPs to Ukraine and Georgia. The summit instead agreed that the two “will become members” at some future, unspecified date. In the meantime they were to undertake reforms, including in the security sector.

As NATO has done repeatedly since 2008, Monday’s summit in Brussels reaffirmed that stance.

“We reiterate the decision made at the 2008 Bucharest Summit that Georgia will become a member of the alliance with the Membership Action Plan (MAP) as an integral part of the process,” it declared in a communique, then repeated the wording for Ukraine.

Elsewhere in the document, NATO expressed support for the territorial integrity of Ukraine and Georgia, calling on Russia to withdraw its forces.

Since a brief war in 2008, Russia has effectively occupied 20 percent of Georgia’s sovereign territory, the breakaway regions of South Ossetia and Abkhazia. Since 2014 it has occupied Ukraine’s Crimea peninsula, and Kyiv accuses it of continuing to ferment a separatist war against the central government in eastern Ukraine.

Russia “has no say” on whether Ukraine joins NATO, Stoltenberg said during a press conference at the close of the summit on Monday.

“I think it’s extremely important to underline that every nation has the right to choose its own path,” he said. “It is for Ukraine, and the 30 allies, to decide when Ukraine can become a NATO member. Russia, of course, has no say. Because they don’t – cannot veto what neighbors can do. We will not return to an age where we had spheres of influence, where big powers decided what small neighbors could do.”

He made similar remarks about Georgia, before noting the fact the alliance operates on a basis of consensus, so he could not say when membership would become a reality.