Rockets launched by terrorists in southern Gaza head towards Israel on Tuesday. (Photo by Said Khatib/AFP via Getty Images)

(CNSNews.com) – President Biden on Monday voiced support for a ceasefire between Israel and Hamas – doing so publicly for the first time since the eruption a week ago of the worst fighting between the Jewish state and the Iran-backed Islamist terrorist group in Gaza in seven years.

The shift came after 29 Democratic senators called jointly for an immediate ceasefire “to prevent any further loss of civilian life and to prevent further escalation of conflict,” and amid a drumbeat of criticism from progressive Democrats in the House.

Meanwhile, on the Senate floor on Monday, Sen. Tom Cotton (R-Ark.) spoke out against the ceasefire calls, saying the U.S. should give its ally “the time, space and resources to destroy Hamas’ war machine and protect its own people.”

A White House readout of a call between Biden and Israeli Prime Minister Binyamin Netanyahu  said the president had “expressed his support for a ceasefire and discussed U.S. engagement with Egypt and other partners towards that end.”

The White House said Biden had also “reiterated his firm support for Israel’s right to defend itself against indiscriminate rocket attacks” and had “encouraged Israel to make every effort to ensure the protection of innocent civilians.”

Israel has been resistant to demands to stop responding to the barrages of rockets fired by the terrorists into Israeli cities and towns. Netanyahu said after meeting with security chiefs earlier on Monday, “we will continue to operate as long as needed to restore quiet and security to all Israelis.”

Until now, Biden has not publicly backed a ceasefire, and the administration has blocked three attempts by the U.N. Security Council to issue a joint statement calling for an immediate ceasefire and condemning both sides for the violence.

Administration officials said the focus instead was quiet but intensive diplomacy aimed at achieving calm, with White House press secretary Jen Psaki referring earlier Monday to more than 60 calls, from the president down, with senior Israeli, Palestinian and key regional leader seeking an end to the violence.

“Our calculation, at this point, is that having those conversations behind the scenes, weighing in with our important strategic partnership we have with Israel, also with other countries in the region, is the most constructive approach we can take.”

In response to a question, Psaki said she did not know if Biden had seen the joint ceasefire appeal from the Democratic senators but added that he was “of course, aware of the calls and the points of view of a range of members of Congress.”

On the Senate floor on Monday, Sen. Cotton said, “The hand-wringing calls for a ceasefire are tantamount to Hamas propaganda.”

Cotton pushed back against arguments that seek to equate the actions of the Israeli military with those of Iran-sponsored terrorists.

“If you cut through the hysterics and the hyperbole you can see the truth clearly: One side seeks to maximize carnage, the other seeks to minimize civilian casualties,” he said. 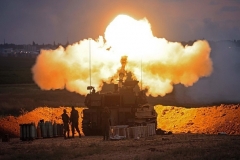 “The moral standing of the competing forces in this conflict is simple and clear: our greatest ally and the only democracy in the region against an Islamist theocracy and its terrorist partners.”

“Most Americans know which side they’re on,” Cotton said. “I speak for them. I say that we stand with Israel.”

“Unfortunately too many elected Democrats have taken a different stand. Members of the so-called Squad in the House of Representatives have called Israel ‘an apartheid state’ and accused it of war crimes,” he said. “Remember, these aren’t obscure backbenchers; many Democrats herald these representatives as the future of their party.”

In a Monday night tweet directed at Biden and Secretary of State Antony Blinken, Rep. Rashida Tlaib (D-Mich.) – one of the House Democrats Cotton was referring to – said, “If you support a cease-fire, then get out of the way of the U.N. Security Council and join other countries in demanding it.”