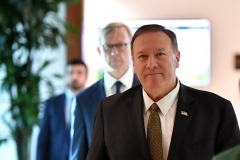 Then-Secretary of State Mike Pompeo and special representative on Iran Brian Hook traveled in the region in September 2019 as the Trump administration discussed with partner nations its response to belligent Iranian behavior. (Photo by Mandel Ngan/AFP via Getty Images)

(CNSNews.com) – State Department spokesman Ned Price on Tuesday would not respond directly when asked if the Biden administration has abandoned 12 requirements its predecessor set down for changes in Iranian behavior, instead referring dismissively to the demands as having been part of a failed “maximum pressure campaign.”

Speaking after further talks in Vienna aimed at getting the U.S. and Iran to return to compliance with the 2015 nuclear deal known as the Joint Comprehensive Plan of Action (JCPOA), Price said the Trump administration’s pressure campaign had not only failed to meet its intended goals – it had produced the opposite.

“In fact, all of those things, the opposite has come true,” Price continued.

“Under the previous administration, we got nowhere closer to a better deal. There was always the myth of the better deal. And in fact, Iran accelerated its nuclear program and enacted measures that would have been prohibited under the JCPOA.”

Asked twice whether the Biden administration still wants the regime “to do those 12 things or not,” Price the first time did not respond, and the second time deflected.

“Maximum pressure has proved to be an inappropriate course given what we have seen from the real-life experiment over the past several years,” he said.

Asked whether the administration thought it could get a better deal than the JCPOA without any pressure, Price said the focus of talks in Vienna was the goal of getting the U.S. and Iran back into the agreement, on the basis of “compliance for compliance” (meaning the U.S. lifts sanctions, and the Iranian regime reverses its breaches of restrictions to its nuclear program to which it agreed under the deal).

The Obama administration was unable to get those issues dealt with in the original agreement because Iran refused to have them on the table – and was supported in that stance by Russia and China. Iranian regime officials have scoffed at the notion that the current administration would be any more successful in doing so.

The 12 demands referred to at Tuesday’s State Department briefing were laid out by then-Secretary of State Mike Pompeo in a May 2018 policy speech at the Heritage Foundation, and characterized as steps the regime needs to take “to gain acceptance in the international community.”

They covered not just nuclear activities but other actions including interference in Iraq, Yemen, Afghanistan and Syria, support for terrorism, the development and launching of ballistic missiles, the detention of Americans and others “on spurious charges,” and aggressive behavior including threats to Israel and Gulf states, threats to shipping, and cyberattacks.

Pompeo conceded at the time that the requirements were ambitious – and “may seem unrealistic” – but said they were nothing more than would be expected from any normal country.

The 12 demands – which Price appeared reluctant to endorse on Tuesday – follow. Pompeo called on the Iranian regime to:

--Give a full accounting to the International Atomic Energy Agency of the prior military dimensions of its nuclear program, and permanently and verifiably abandon such activities

--Release all U.S. citizens and citizens of U.S. partners and allies detained on spurious charges

--End support for Mideast terrorist groups including Hezbollah and Hamas

--Respect the sovereignty of the Iraqi government and allow the disarming, demobilization, and reintegration of Shi’a militias

--Withdraw all forces under its command from Syria

--End support for the Taliban and other terrorists in Afghanistan and the region, and stop harboring senior al-Qaeda leaders

--End its threatening behavior against its neighbors, including threats to destroy Israel, and the firing of missiles into Saudi Arabia and the United Arab Emirates; end threats to international shipping, and cyberattacks