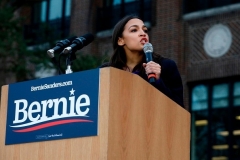 Rep. Alexandria Ocasio-Cortez campaigned for Sen. Bernie Sanders, and then after he ended his presidential campaign co-chaired a Sanders-Biden "unity taskforce" on climate. (Photo by Jeff Kowalsky/AFP via Getty Images)

(CNSNews.com) – Recommendations for the Democratic Party platform compiled by Biden-Sanders “unity taskforces” include numerous proposals on “combating the climate crisis,” but they are notably thin on detail when it comes to a major U.N. global warming initiative which President Trump defunded in 2017.

“Beyond immediately rejoining the Paris Climate Agreement, including the Green Climate Fund, and encouraging our partners and allies to increase their ambition to reduce their own carbon pollution, Democrats will work to ratify the Kigali Amendment to the Montreal Protocol and move expeditiously to phase out super-polluting hydrofluorocarbons in the United States.”

International climate finance was one of the issues that most sharply distanced Trump’s environmental stance from the Obama-Biden administration’s climate policies.

Launched in 2011, the Green Climate Fund (GCF) is intended to help developing countries curb carbon emissions and cope with phenomena blamed on climate change, such as drought and rising sea levels. The declared aim – a commitment that was restated at the 2015 Paris climate conference – was to raise $100 billion a year globally from public and private sources by 2020.

In late 2014 President Obama unilaterally pledged $3 billion to the GCF over four years, and by the time he left office, $1 billion had been sent (in two equal instalments, the second just three days before Trump’s inauguration.)

Trump, in line with a campaign pledge to “cancel billions in global warming payments to the United Nations,” killed the funding, and the GCF still holds the U.S. to be in arrears to the tune of $2 billion.

With the U.S. absent, the GCF late last year sought a second round of funding pledges (or what it calls the “first replenishment”), garnering a total of $9.8 billion for the next four-year cycle from 27 countries, with Britain, France, Germany, and Japan each accounting for pledges of more than $1 billion.

Before he suspended his White House campaign, Sen. Bernie Sanders pledged not just to resume participation in the GCF, but to provide no less than $200 billion to the fund. The U.S. and other major developed nations, he said, had “finally recognized that they had an outsized role in the creation of the climate crisis, and an outsized obligation to less industrialized nations to help them achieve the same kind of carbon pollution emissions reductions while improving the quality of life in those countries.”

By contrast, former Vice President Joe Biden’s climate plan includes a pledge to recommit the U.S. to the GCF, but with no monetary sum mentioned. (A reference in the plan to “meet America’s climate finance pledge” suggests that he intends to make good at least on the remainder of the $3 billion promised by Obama, and withheld by Trump.)

The six “unity taskforces” announced by Biden and Sanders after the latter suspended his presidential campaign were designed to find common ground and reach compromises on issues of importance to their two camps.

The taskforce on climate was co-chaired by Ocasio-Cortez, the Green New Deal advocate who had campaigned for Sanders, and Kerry, a former presidential candidate, secretary of state and longtime climate change campaigner, who has been campaigning for Biden since endorsing him late last year.

After the taskforces released their recommendations on Wednesday, Sanders told MSNBC that while there were clearly differences between the perspectives of the “progressive movement” and “Biden’s people,” the compromise reached by the task forces, “if implemented, will make Biden the most progressive president since FDR.”

Last week the House Select Committee on the Climate Crisis, a panel created by Speaker Nancy Pelosi (D-Calif.) early last year, released a 538-page “action plan” which among other things recommends that “Congress should contribute the funds necessary to meet our financial commitment to the Green Climate Fund.”

Beyond referring to Obama’s $3 billion pledge in 2014, and the $1 billion transferred by the end of his administration, the plan does not refer to any particular sum of money the committee wants the U.S. to contribute in the future.

However, it does highlight legislation, introduced last year by Rep. Adriano Espaillat (D-N.Y.), which calls for appropriations each fiscal year of “such sums as may be necessary for contributions to the Green Climate Fund … to exceed the commitment by developed countries to jointly mobilize, starting in 2020, $100,000,000,000 for climate financing each year.”